European aviation has recovered both capacity and passenger numbers throughout 2Q2021. Seat capacity in Europe is 53.0% below 2019 in the week commencing 21-Jun-2021, compared with a reduction of 70.6% in the first week of the quarter. Europe is now closer to 2019 capacity than at any time since Mar-2020.

However, this result remains weaker than the other regions, even though the gap is narrowing.

Europe's passenger traffic trend has also improved, although with a gap of approximately 8ppts behind capacity. In early Jun-2021 European airport traffic was 67% below 2019 levels (source: ACI Europe), but this compares with US traffic being just 28% below 2019 (source: US Transportation Security Administration).

Europe has higher vaccination rates than most regions apart from North America, but its reliance on international markets is weighing on its recovery. A better synchronised approach between states to reopening international travel in Europe could improve this.

In the week commencing 21-Jun-2021, total European seat capacity is scheduled to be 17.2 million, according to OAG schedules and CAPA seat configurations.

In absolute terms, the 17.2 million seats scheduled for this week is more than at any other time during the COVID-19 pandemic.

Europe has almost closed the gap with the next weakest region

Europe, Africa and North America have taken upward steps in the trend of seats versus 2019 levels this week. Asia Pacific and Middle East have remained broadly level with last week, whereas Latin America has taken a small downward step. 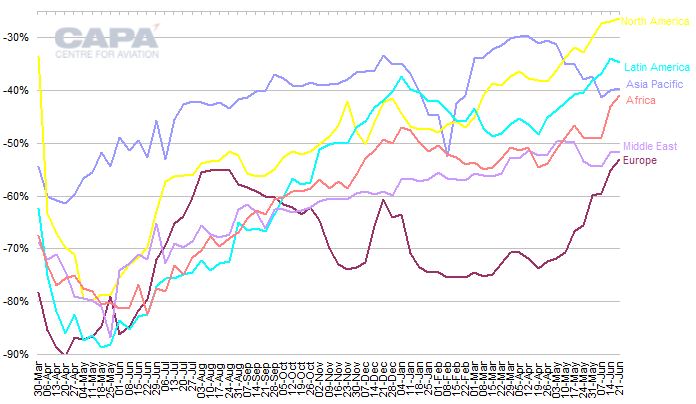 Europe's airlines continue to hold on to their peak summer schedules

Schedules for 3Q2021 have been trimmed by 2% since last week, with seat numbers for the quarter planned to be down by 27% versus 2019. However, projected 3Q capacity was modestly increased last week, and the current outlook has changed little over the past month.

With an ambitious 73% of 2019 seat capacity still scheduled for 3Q2021, Europe's airlines continue to hold on to their peak summer schedules.

Europe's passenger trend is improving too, but is behind the capacity trend

The improving trend in European seat capacity as a percentage of 2019 over the past six weeks has been followed, with a lag, by passenger data.

According to preliminary data from ACI Europe covering 86% of European passenger traffic, passenger numbers were down by 67% versus 2019 in the week commencing 6-Jun-2021 (the most recent week for which data are available). 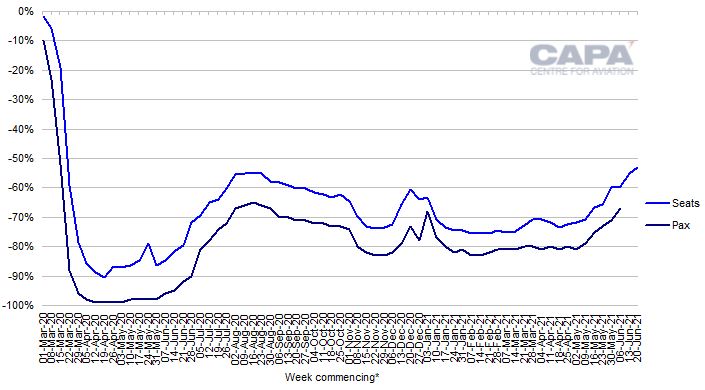 Europe's reliance on international markets continues to hold back its recovery

The improving trend in European passenger numbers is considerably weaker than the recovery in US traffic.

According to data from the US Transportation Security Administration on travel numbers through the agency's checkpoints, traffic was down by only 28% versus 2019 in the week commencing 6-Jun-2021 (compared with ACI Europe's -67%).

The relative weakness of the European passenger traffic recovery so far, by comparison with the much stronger US recovery, is explained to a high degree by the chart below from IATA.

Using data on the world's top 30 countries by 2019 passenger numbers, the chart shows vaccinations per 100 people as of 7-Jun-2021 (horizontal access) and share of domestic passengers in total traffic (vertical axis).

Current* vaccination doses per 100 inhabitants, and share of domestic passengers in 2019

The US is the only large market that enjoys both a high vaccination rate and a large proportion of domestic passengers. Its airlines do not need to rely very much on the relaxation of international travel restrictions.

By contrast, most of the larger European markets have a very low share of domestic passengers and only a middling vaccination rate compared with other countries.

However, European domestic markets are smaller and this factor is currently more significant in holding back Europe's recovery. European airlines rely much more on international markets.

Moreover, those airlines rely significantly on international markets to destinations beyond Europe. According to IATA, 38% of EU passengers travelled outside the EU in 2019.

Although recent weekly traffic data are not available for all regions, the capacity data indicate that Europe continues to lag other regions, even if the gap is closing. This lag is in spite of Europe's higher vaccination rates compared with most regions apart from North America.

A more coordinated and flexible approach to international travel restrictions among European governments could help to convert Europe's relatively good progress on vaccinations into a stronger aviation recovery.