The easing of international travel restrictions helped to drive Europe's capacity recovery in early summer 2021. Weekly seat capacity improved from 26% of 2019 levels in late Apr-2021 to 66% in early Aug-2021. However, the recovery has lost momentum over the past two months

There is a wide range in the pace of recovery among Europe's leading aviation markets.

Russia is at 89%, whereas the UK is at just 54% of 2019 seat levels. All appear to be fading in impetus to make the next significant upward step. The further easing of travel restrictions, for example as in the UK from 4-Oct-2021, has already been taken into account in airline schedules.

In the week commencing 04-Oct-2021 total European seat capacity is scheduled to be 22.6 million, according to OAG schedules and CAPA seat configurations.

Europe remains in fourth place in the ranking of regions measured by seats as a percentage of 2019 levels.

Asia Pacific is still the worst-performing region, with capacity down by 39.6% versus 2019 this week. The Middle East's seat count is down by 36.9%.

North America, the Middle East and Latin America have taken upward steps in the trend this week, while Europe, Asia Pacific and Africa are broadly flat on last week. 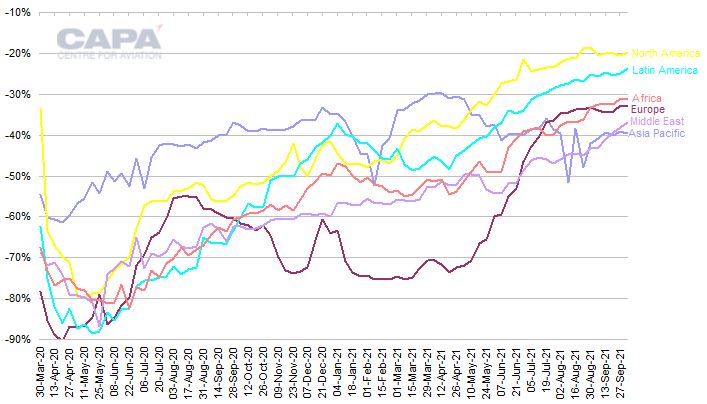 Europe's leading aviation nations have reached varying stages in the recovery of 2019 seat capacity levels. In general, those with larger domestic markets have recovered more quickly than those with only a small domestic market.

Layered onto this factor has also been the stringency of international travel restrictions and the pace of the lowering or removal of these restrictions.

In the week of 04-Oct-2021, Russia is at 89% of its capacity for the equivalent week of 2019, followed by Turkey, which is at 84%. They are both well ahead of the Europe average of 67%, boosted by their having the two largest domestic markets in Europe.

However, Russia has slipped back from a peak of 93% two weeks ago and Turkey is no higher than it was in mid Aug-2021.

The two pre-crisis leading aviation nations before the coronavirus pandemic, the UK and Germany, are the weakest performers among the seven leading European markets. The UK is at 54% of seat numbers for the equivalent week of 2019 and Germany is at 57%.

For a long time the UK had some of the strictest travel restrictions in Western Europe and it also has a relatively small domestic market. These two factors have held it back.

Although the UK remains at the lowest percentage of 2019 capacity among Europe's leading markets, it has risen most rapidly over the past quarter as travel restrictions have eased. Throughout much of the same period, Europe overall has been on a plateau.

Germany has moved up modestly in the past two weeks, after a few weeks of sideways movement.

Spain is at 70% – the highest of leading W. European nations

Among the leading Western European nations, Spain has recovered most rapidly, reaching 71% of 2019 capacity this week. Italy is at 65% and France at 60%.

Italy has slipped back from its Aug-2021 peak of 68% of 2019 levels, while France is down from its 66% peak. Spain's trend has not varied significantly from the 70% mark for two months. 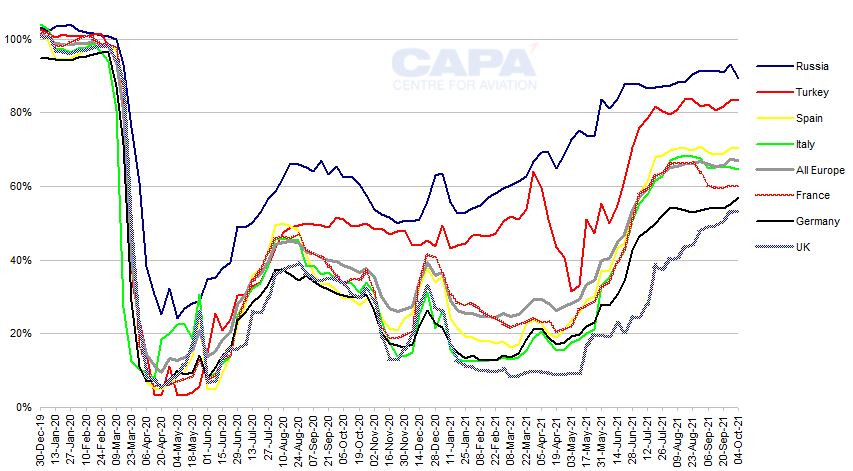 The UK's further simplification and easing of international travel restrictions from 4-Oct-2021 are keeping it on an upward path, but its recovery has levelled off somewhat.

This seems to demonstrate that the easing of travel restrictions has been fully factored into Europe's airline schedules and the resultant capacity projections.

As has been the case throughout the crisis, schedules for future weeks and months have been created to keep airlines' options open. As the time has approached, capacity plans have consistently been trimmed. Even when capacity as a percentage of 2019 levels has continued to increase, it has done so at a slower pace than had been projected by earlier schedules.

Europe's aviation capacity recovery has lost momentum over the past two months. It needs a more global opening up of international borders, which needs more uniformly high rates of vaccination around the world. This will help Europe to take the next upward step in the capacity recovery.