However, passenger traffic declined 8.4% year-on-year in the 12 months ended 31-Dec-2009. Other highlights include:

Copenhagen Airport Vice President of Sales, Carsten Nørland, stated 2009 was a “difficult year for the aviation industry” and while full year traffic was down, “and we are pleased with the growth recorded in the past two months”.

CAAC stated China’s aviation industry bounced back in 2009, reporting a combined profit of CNY12.2 billion (USD1.8 billion), compared to a loss of CNY26 billion (USD3.8 billion) in 2008. The country’s airports reported CNY34 billion in operating revenue and CNY30 billion in profits in 2009 - some CNY500 million less than 2008.

In other airport financial news, Spain’s AENA reportedly posted a loss of EUR434 million for 2009. The loss came as Madrid Barajas Airport reported a EUR300 million loss for the year. The airport authority expects to report losses of EUR597.7 million in 2010, bringing its accumulated debt to EUR10.5 billion. The Spanish Government also announced nine of 48 Spanish airports reportedly made profits in 2009, while Lanzarote and Sevilla airports broke even. More information on the nine airports’ profits is contained in today’s edition of Airport Business Daily.

Airport Business Daily also features the latest traffic headlines from around the world. Today’s highlights include: 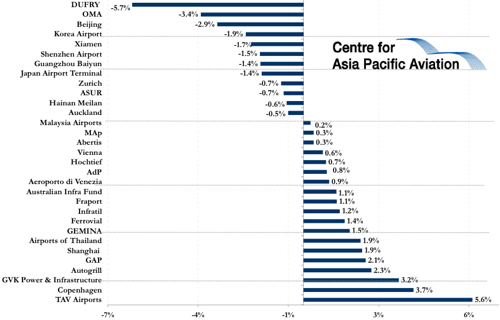