Both capacity and traffic data show the impact of changes in travel restrictions in Europe. Most recently, the expansion and contraction of the UK's green list – specifically the addition and then removal of Portugal – is clearly visible in capacity data.

Seat capacity in Europe is 59.5% below 2019 in the week commencing 7-Jun-2021, almost the same as the previous week after six weeks of a clear improvement. Europe remains below the other regions on this metric.

Weekly passenger data from ACI Europe are only available up to the final week of May-2021. Nevertheless, this week's capacity data – coinciding with Portugal's removal from the UK green list – suggest that the previously improving trend of passenger data will also pause, or even reverse.

Moreover, Europe's airlines suffered the most negative cash flows in 1Q2021 (source: IATA). There is a real risk that this underperformance will continue into the European summer peak if travel restrictions do not relax.

In the week commencing 7-Jun-2021, total European seat capacity is scheduled to be 14.6 million, according to OAG schedules and CAPA seat configurations.

This is only 0.4ppts better than the 59.9% fall a week ago (the week commencing 31-May-2021), and is a near levelling-off in the trend after six weeks of more rapid narrowing capacity reductions versus 2019.

Europe remains behind other regions

All regions apart from Asia Pacific have taken upward steps in the trend of seats versus 2019 levels this week. Asia Pacific, for so long leading all other regions as a percentage of 2019 seats, has slipped from first to third place over the past month. 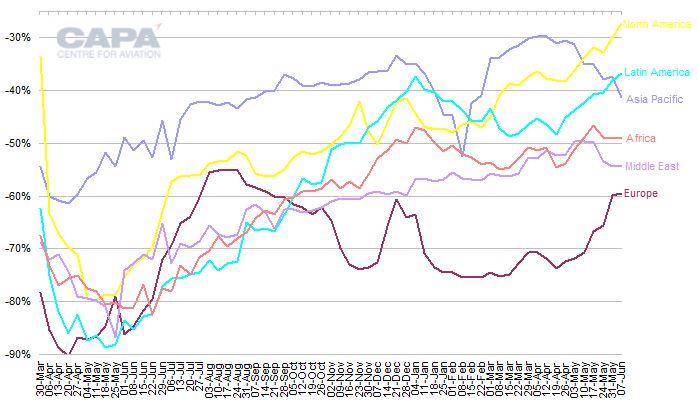 Schedules for 3Q2021 have been trimmed by only 1%, with seat numbers for the quarter now planned to be down by 27% versus 2019. This is still an ambitious 73% of 2019 – again underlining the desire of Europe's airlines to hold on to their peak summer schedules for as long as possible.

Nevertheless, CAPA has previously argued that achieving more than 50% of 2019 levels in 3Q2021 would be a positive outcome.

Changes to travel restrictions are visible in capacity and traffic data

The UK's partial relaxation of travel restrictions when it reopened non-essential international travel to/from a limited number of destination countries from 17-May-2021 is discernible in Europe-wide data for both capacity and passenger traffic.

The UK green list included only one mass tourism destination: Portugal. Nevertheless, European seat capacity took its most noticeable upward step in the change from 2019 levels in the week that the green list became effective.

There was also an improvement in passenger traffic at the same time.

According to preliminary weekly data from ACI Europe, passenger numbers across the continent's airports were down by 80% or more throughout the period between late Jan-2021 and early May-2021.

In the week commencing 16-May-2021, the passenger trend improved to -75% and, a week later, to -73%. As has been the case throughout the pandemic, passenger data remained weaker than seat data, but the two curves followed a similar shape.

ACI Europe's weekly passenger data are not available beyond the week commencing 23-May-2021 (note that the ACI passenger data week starts one day before the OAG schedule week).

However, the abrupt levelling out in the previously improving capacity curve in the week of 7-Jun-2021, prompted in part by the removal of Portugal from the UK green list, indicates that there will be a similar pause in the improving passenger data.

Portugal came off the UK green list from 8-Jun-2021, i.e. part way into the week, so the data may fall next week when the full impact is recorded.

The prospects for Europe's seasonal summer peak, usually in the third quarter of the year, remain precarious. The UK's changes to its green list are only one illustration of the unpredictable changes in travel restrictions.

Additional restrictions imposed on UK travellers by France and Germany in response to rising cases of the Delta variant of COVID-19 first detected in India and spreading in the UK, and in spite of high vaccination rates in the UK, are another. 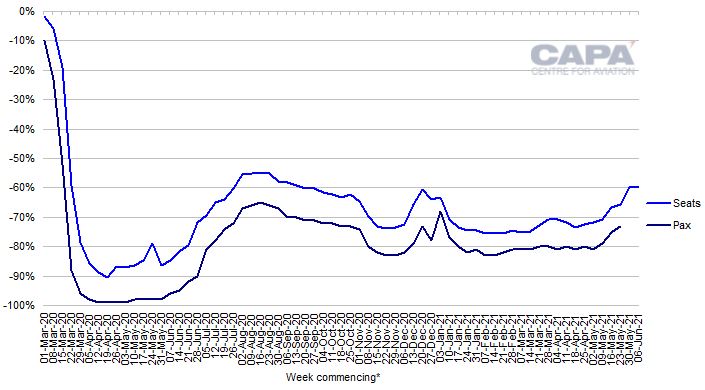 Europe's airlines suffered the most negative cash flows in 1Q2021…

According to a 4-Jun-2021 release from IATA, using data from the Airline Analyst, Europe's airlines suffered the most negative cash flows in 1Q2021.

This performance reflected the spread of the virus and tight travel restrictions in Europe in 1Q2021. 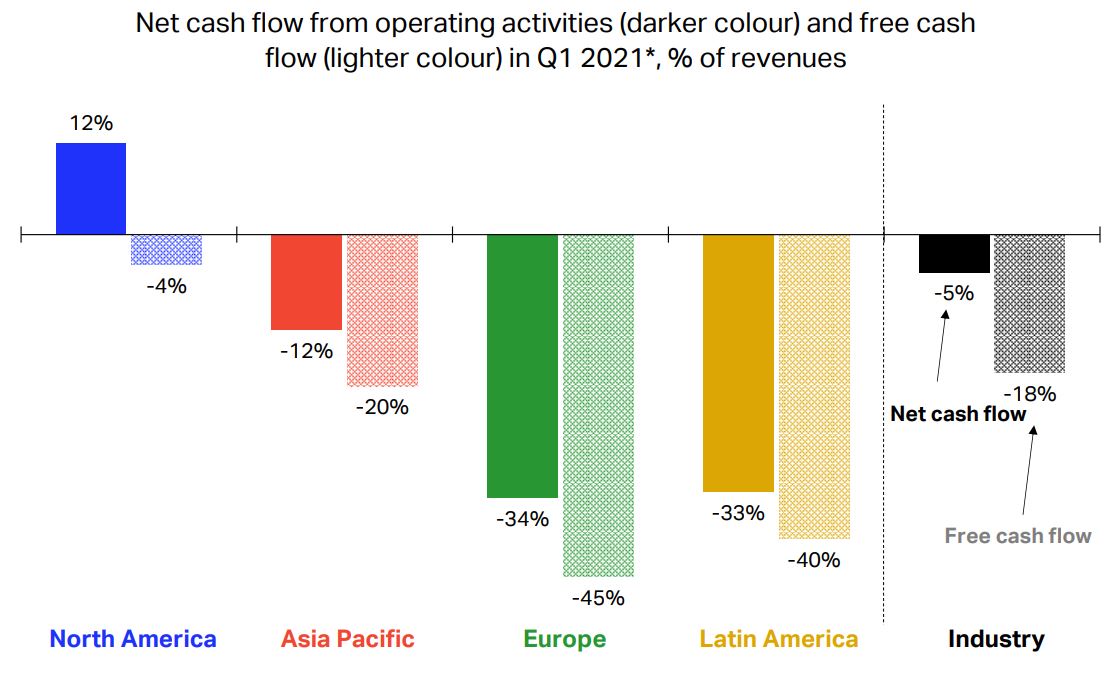 …and this seems likely to continue

Capacity and traffic trends have improved into 2Q2021 – but not by very much. Cash flows are likely to remain significantly negative in 2Q2021.

Looking ahead into 3Q2021, crucial for European airlines as it is usually the strongest quarter, IATA rightly observes that "financial performance will vary across regions".

The still inconsistent and tight restrictions on international travel in Europe put the region's airlines at risk of remaining the worst performers on cash burn this summer.