European aviation is feeling the burden of the COVID-19 crisis even more heavily than other world regions. Its year to date cumulative seat capacity is down by 55% – worse than in any other region.

Moreover, according to IATA, its airlines generated negative free cash flow at -83% of revenue in 2Q2020, versus an average of -52% for all regions. Preliminary 3Q2020 results from the leading European airline groups, Lufthansa, IAG and easyJet, indicate that they have continued to burn through cash at a rapid rate.

Globally, airlines are expected to continue to burn cash until at least the end of next year, but Europe's airlines may struggle for cash break-even for longer than that.

Total European seat capacity is scheduled to be 11.3 million in the week of 26-Oct-2020, according to schedules from OAG combined with CAPA Fleet Database seat configurations.

The 62.1% year-on-year cut in total seats this week is the 32nd week of very heavy double digit percentage (more than 50%) declines in seats.

Europe's domestic seats have been cut by 37.1% year-on-year, compared with last week's -36.8%. This was the 10th successive downward step, but still the 18th week running with domestic capacity at more than 50% of last year.

However, international seat capacity narrowed its rate of year-on-year decline, falling by 70.2%, compared with last week's -71.4%.

However, week-on-week capacity declines are to be expected, given the start of the winter season on 25-Oct-2020.

After a week with the deepest year-on-year cut in seat numbers of all world regions, Europe is now joined in equal last place by Middle East, both with a reduction of 62.1%.

Asia Pacific has now had 16 consecutive weeks at more than 50% of last year's capacity. It is still the only region above this threshold, although North America is now the closest it has been to reaching it since before the crisis.

All regions narrowed their rate of year-on-year decline this week. This is the first time that this has happened since the week commencing 29-Jul-2020. 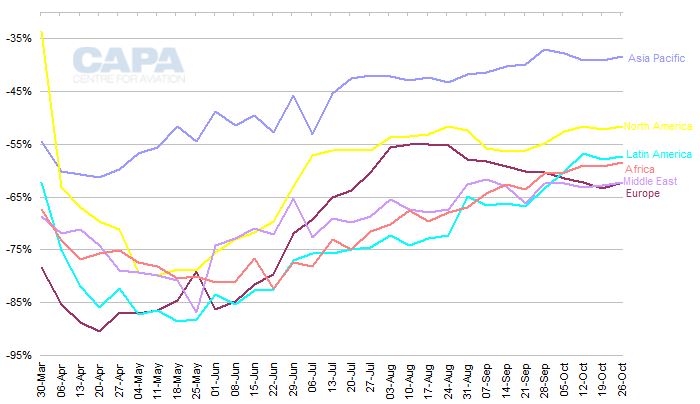 As CAPA has previously observed, it is likely that Europe will have no more than 40% of 2019 capacity (and below 25% of passenger numbers) in the winter season.

In spite of the narrower rate of year-on-year decline in seat capacity in the week commencing 26-Oct-2020 compared with last week, there is still scope for further significant cuts to future schedules filed with OAG.

Europe: percentage change in airline seat capacity vs equivalent week of 2019, with outlook at different dates* 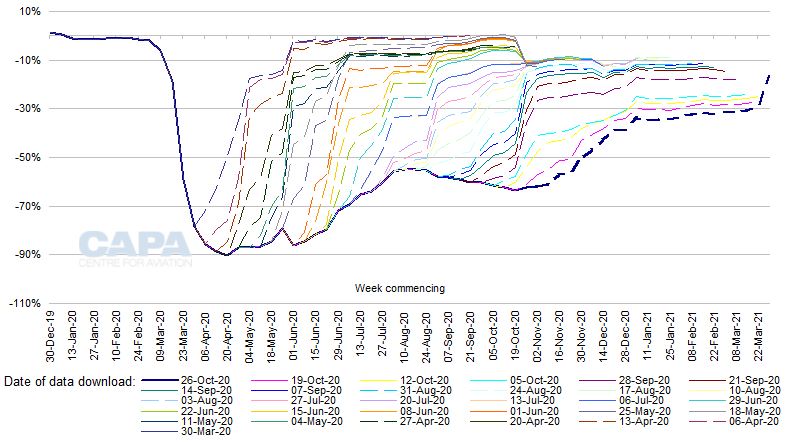 As noted above, Europe is no longer solely on the bottom of the pile when ranked by the percentage of 2019 capacity for the week commencing 26-Oct-2020.

However, it is on its own in last place when global regions are ranked by their cumulative year to date capacity (for the first 44 weeks of 2020, up to and including the week of 26-Oct-2020) as a percentage of capacity up to the equivalent week of last year.

Europe's year to date seat count is down by 54.6% year-on-year and its total capacity has been pushed into third place by North America, whose capacity is down by 43.7%. Asia Pacific, which remains the largest aviation region by year to date seat numbers, has suffered a cumulative drop of 'only' 37.3%.

The smaller regions – Latin America, Middle East and Africa – have all undergone a capacity decline of approximately 51% year-on-year so far in 2020. 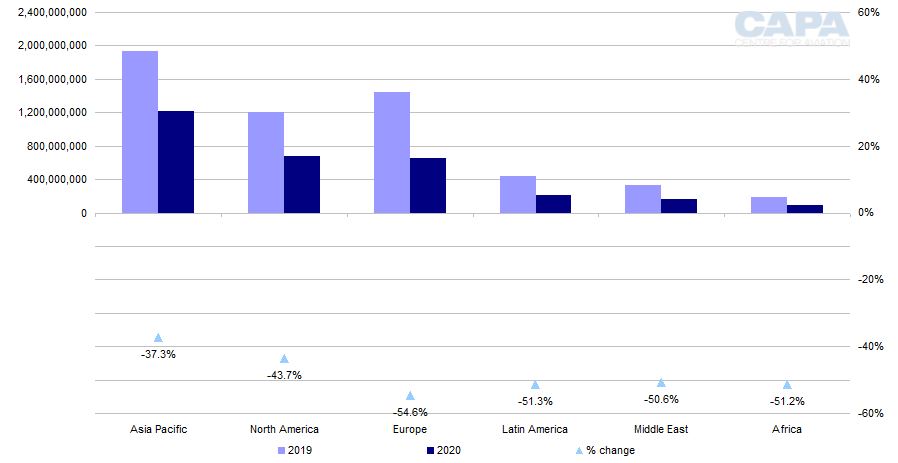 Europe's airlines also suffered the biggest negative free cash flow as a percentage of revenue in 2Q2020, according to data from IATA. According to the airline industry trade body, in 2Q2019 free cash flow (which is net cash flow from operations less capital expenditure) was modestly positive for all regions, apart from Latin America.

Globally, the airlines in IATA's sample generated positive cash flow from operations equivalent to 13.4% of revenue and spent 9.9% of revenue on capex, giving free cash flow of 3.5%.

North America had the best free cash flow as a percentage of revenue, at 6.9%, and Asia Pacific managed 2.7%. Europe just managed a positive figure of 0.9%, generating cash flow from operations at 11.3% of revenue and spending 10.4% of revenue on capex.

A year on, in 2Q2020, all regions slumped to heavily negative free cash flow.

The airlines in IATA's global sample suffered an average cash outflow from operations of -34.5% of revenue as they could not reduce cash costs as much as the drop in revenue. Although they cut capex in absolute terms, it increased as a percentage of much reduced revenue to 17.6%.

2Q2020 marked the depth of the crisis, with capacity at its lowest levels, and this was when free cash flow was at its most negative. IATA expects global cash burn (i.e. negative free cash flow) to have reduced from USD51 billion in 2Q2020 to around USD42 billion in 3Q2020 and to reduce to around USD35 billion in 4Q2020.

Nevertheless, this remains a very high rate of cash burn, highlighting the challenges of cutting cash costs in line with revenue, and of generating sufficient revenue to cover the costs of returning capacity. IATA's outlook foresees negative free cash flow, albeit in a reducing scale, for every quarter until at least the end of 2021.

EasyJet estimated its calendar 3Q2020 cash burn at "less than GBP700 million", less than the GBP774 million in 2Q2020, but still very high compared with revenue of c.GBP620 million.

IATA does not break out its quarterly cash burn forecasts through to the end of next year by region. However, Europe is starting from a lower base than the global average, both in terms of its year to date capacity and its very negative 2Q2020 free cash flow.

Leading European airline groups have revised their capacity plans downwards recently. Ryanair plans winter capacity at 40% of 2019 levels (versus 60% previously planned), IAG plans 4Q2020 at 30% of 2019 levels (cut from 40%), while Lufthansa and easyJet are aiming for 25%.

Capacity cuts are clearly aimed at reducing costs and limiting operations to routes that generate a positive cash contribution. However, demand remains both low and very volatile, which means that revenue is much harder to predict than cost for any level of capacity.

The evidence suggests that, in aggregate, Europe's airlines may struggle to achieve cash break-even beyond the end of 2021.