Europe's full service airlines have seen a recovery in traffic volumes in the week ended 22-Mar-09, after a worrying decline in traffic since late Feb-2009.

Total scheduled traffic (RPKs) for the members of the Association of European Airlines (AEA) fell 8.1% year-on-year in the week ended 22-Mar-09, after slumping by 14% the previous week.

Cross-border European traffic was down 6.8% in the latest week, while Asia Pacific traffic was down 8.5%. AEA traffic in the North Atlantic region was still down a concerningly low 11.2%, but better than the previous week's 15.2% plunge. 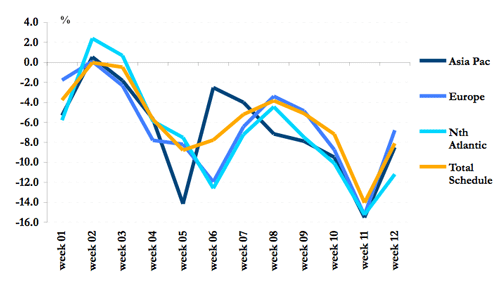 In Air France-KLM's earnings downgrade on Friday, CEO, Pierre-Henri Gourgeon, traffic in the initial weeks of March - traditionally one of the busier months - show a further decline. He added, "these lower activity levels have been accompanied by a significant deterioration in unit revenues both in passenger and cargo, notably as a result of the decline in business travel and international trade".

Still too much capacity

Capacity (ASK) continues to far exceed traffic and fell just 1.5% in the week ended 22-Mar-09. Cross-border European capacity actually rose 0.3% , but was down by 4.4% on Asia Pacific routes and 2.6% on the North Atlantic. 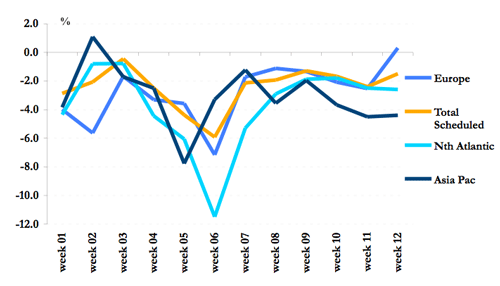 Load factors are taking a hammering as a result, although they have improved from the mid-60s in late Jan-2009, to around 72% (total scheduled) in the latest week. 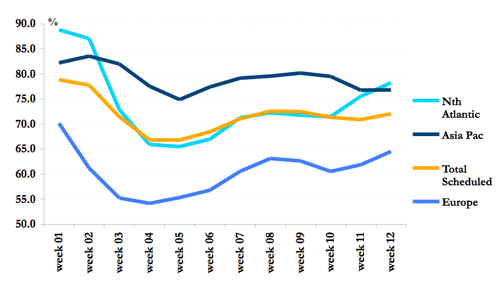 Europe's full service carriers will need to be more aggressive on the capacity side if they wish to rebuild their load factors in coming months.

Air France-KLM stated on Friday that it has further reduced capacity in both the passenger (-3.4%) and cargo (-13%) businesses for its new financial year (commencing 01-Apr-2009). As a result, the carrier anticipates a 6% decline in revenues (on a similar currency and industry consolidation basis), "although it will remain highly dependent on how the economic crisis plays out".