With 2014 forecast by IATA to be yet another year in which Europe is the least profitable major region for airlines, strategies for survival continue to be under focus. The larger network carriers have not only been hit by LCC competition on short haul, but also have faced growing competition from the Gulf carriers and Turkish Airlines on long haul. Smaller full service carriers have also been hit by the growth of ‘superhubs’, forcing them to cut back their long haul networks.

Although margins are improving, they remain slim and profits are unevenly divided. A few European LCCs make decent returns, while the majority of full service carriers (FSC) make little or no profit and several (particularly the smaller ones) are loss-making. More bankruptcies cannot be ruled out.

CAPA’s World Aviation Summit in Nov-2013 explored some of the strategic options for Europe’s FSCs in a panel session moderated by Professor Rigas Doganis and including senior executives from Aer Lingus, Lufthansa, Transavia, Virgin Atlantic, Vueling and Bombardier.

Tamur Goudarzi Pour, director of network planning hub Munich for Lufthansa, argues that his airline has already done a lot to improve profitability on short haul, helping to set the group on the way to achieving its target of EUR2.3 billion of operating profit in 2015. However, he sees a clear differentiation between short haul point to point and hub services.

Mr Goudarzi Pour says that Lufthansa’s hub operations are already profitable. Lufthansa is phasing out turboprops from its hubs and seeking new partnership models. On short haul point to point, Lufthansa is transferring all non-hub services to LCC subsidiary Germanwings. Is this part of the business profitable? “Germanwings is on the way, but not there yet”, says Mr Goudarzi Pour.

See related report: Germanwings: can a premium strategy sustain an LCC? Lufthansa would like to think so

Alex Cruz, CEO of LCC Vueling (part of IAG) appears sceptical on Lufthansa’s short-haul point to point strategy. “Don’t ask me if this is the right strategy”, he says, “The answer is cost. You have to go to the unions and say ‘either we do this, or we won’t survive’”. Mr Cruz also believes that there needs to be a clear separation between legacy carrier groups and their LCC subsidiaries. He asks if there are any Lufthansa employees in Germanwings’ offices and is told that there are. “Then they won’t be profitable,” he predicts.

Transavia is the LCC subsidiary of the Air France-KLM Group. Its managing director and chairman, Mattijs ten Brink, echoes the importance of freedom for LCCs that are part of a legacy group. Referring to Germanwings, he says “if they get freedom on the network, they have a fighting chance. Transavia has freedom.” However, he argues that this is not all that is required. “Shifting everything that is not feeder into one company is not enough. You need [low] costs,” he says. He agrees that point to point operations should be independent and believes that hub feeder traffic should be “at least break-even”.

Mr ten Brink sees an increasingly clear distinction between the different short haul brands of the Air France-KLM Group. “KLM and Cityhopper fed the [Amsterdam] hub. The same with Hop [for the Paris CGD hub]. In time, Hop will take on all domestic [French] flights.” Mr ten Brink claims that Transavia is sufficiently profitable to cover its cost of capital, although this is not supported by data reported by Air France-KLM. According to its parent group, Transavia made an operating profit of just EUR12 million in 9M2013 and 4Q is typically loss-making (and so a full year profit for 2013 cannot be a certainty).

Christoph Mueller, CEO of Aer Lingus, returns to the question of whether or not Lufthansa’s short haul operations can be profitable. According to his analysis, an answer based only on costs is too simple. “How were these traffic systems invented?” he asks. He divides Lufthansa’s short-haul traffic in Munich into three categories: point-to-point, European transfer and long-haul feed. LCC services have all but killed off European transfer traffic and long-haul connectivity is in decline. “The hub systems were designed with many banks, which they cannot fill,” says Mr Mueller, adding that “there are approximately 500 aircraft feeding European hubs that don’t cover their cost of capital. […] Feeder traffic is unprofitable in the current bank system”.

Lufthansa’s Mr Goudarzi Pour reiterates that short-haul feed is now profitable in his airline, but he adds that each hub needs to be profitable, with its own unique selling point. He says that Lufthansa hubs are adjusting their bank structure and that they serve destinations not served by others. 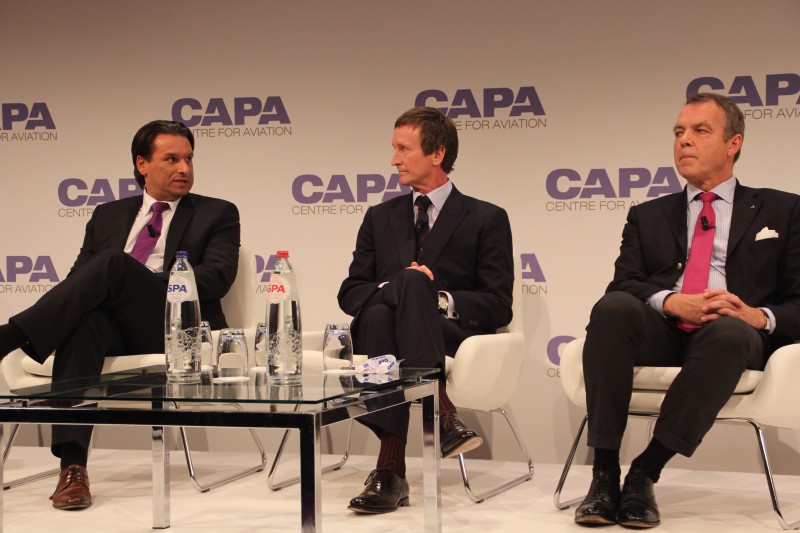 Nevertheless, cost remains an important part of the story for all the panellists and Mr Mueller believes that it is important to focus on areas where most gains can be made. “In Aer Lingus, we didn’t start with the low hanging fruit,” he says, “but we started with the big ones: labour is the thing you have to address.” Nevertheless, he also stresses the need to “work on the top line as much as the cost line”.

Steven Aliment, Bombardier VP sales for Europe, believes that his company’s aircraft can help carriers to adapt their costs. “We give choices that they can build their strategy around,” he says, “If everyone has the same club to beat each other with, it’s down to the last man standing”. In particular, he argues that smaller FSCs need to differentiate themselves. “They can’t go head to head with Ryanair or easyJet and win. It’s impossible, he says. According to Mr Aliment, Bombardier can provide small aircraft with similar CASK (cost per available seat kilometre) as a Boeing 737-800 or an Airbus A320 and this can give smaller carriers a niche.

Should legacies follow the Lufthansa model and turn over all their non-hub feeding routes to their own low-cost subsidiary?

For Mr Cruz, the answer with respect to whether Iberia should outsource its short haul operations to Vueling is unequivocal. “No,” he states, “[Iberia] is restructuring, Iberia Express is a successful tool, it has a lot of options”. He argues that the Iberia brand is associated with connecting Europe to South America and some parts of Africa, in addition to some connectivity within Europe. Vueling is associated with point to point services within Europe.

In the summer of 2011 (before Vueling was acquired by IAG), Iberia entered into a short term contract outsourcing some flights feeding its Madrid hub to Vueling. Nevertheless, Mr Cruz does not see this experiment being repeated. “It was five aircraft, with little time to prepare and we’d need more time for planning,” he recalls. He says that his airline is a “fundamentally different business” to Iberia. Although Vueling offers a connection service at Barcelona, where one in five of its passengers transfers from one Vueling flight to another, Mr Cruz says that there is “no compromise on the network or fares”.

Mr Mueller sees some possibilities for FSCs to outsource hub feed to LCCs, but also points to a significant hurdle. “LCCs don’t have the IT environment for connecting: for example, bag flows…This is a real obstacle.” Aer Lingus’ hub at Dublin already sees a good deal of self-connecting by passengers.

Mr Mueller believes that legacy carriers missed the opportunity to outsource activities and thereby to achieve lower costs in 2009 and 2010 when many faced severe financial difficulties. “Only the threat of bankruptcy prompts an amicable solution”, he says.

There are limits to the potential for Transavia to take on more and more operations from other Air France-KLM carriers, according to Mr ten Brink. “It won’t be the main feeder, it’s a point to point model,” he says, adding “it is not long haul.”

See related report: LCC experiences: how was it for you? Hybridisation and Airlines in Transition

How can Europe’s long-haul airlines meet the capacity and pricing challenge of the rapidly growing Gulf carriers – and Turkish?

Edmond Rose, director of airline planning at Virgin Atlantic, sees a clear difference between his airline and the big Gulf carriers. “We compete by offering something they don’t: non-stop [services],” he says, “We offer a premium product to go non-stop. We have to serve points that are most relevant to our customers. We don’t have to serve every point on the globe.” He adds that Virgin offers additional destinations through partnerships, for example South African Airways to Durban or Port Elizabeth. Asked about Virgin Atlantic’s profitability, he says that it is improving and that it is “nearly profitable”.

Mr Goudarzi Pour notes the additional capacity being operated by the likes of Emirates and Etihad into Munich, but believes that there is “enough space for several players”. He adds that there are regions that are less affected by the Gulf carriers, such as the Atlantic, but it is important to work on costs, aircraft efficiency, cabin configuration, seat density and product investment. 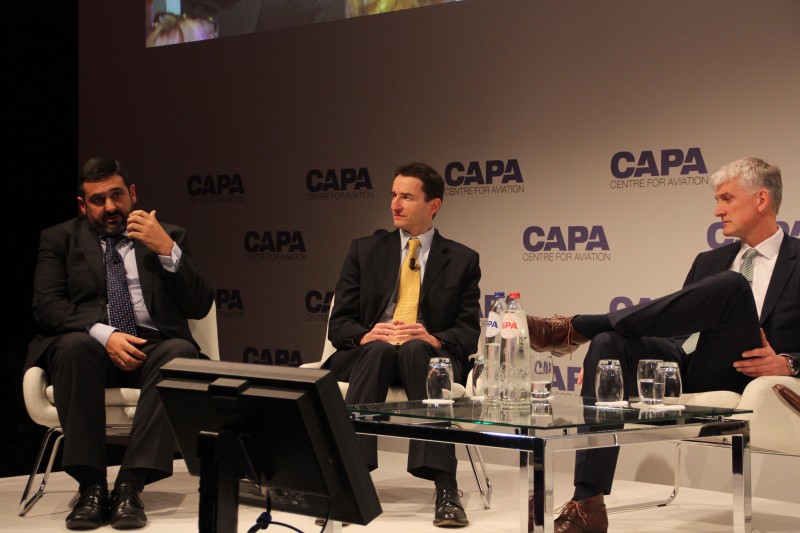 Mr Mueller reminds delegates that the concept of the Middle East hub was “invented by Lufthansa Cargo”, when it established a hub at Sharjah based on the idea that “long-haul to long-haul equals low cost”. However, he sees opportunities for European carriers to establish non-stop routes from secondary cities to destinations in China, although this requires “traffic right reciprocity”.

What should Europe’s smaller full service airlines do to survive when faced with competition from larger global carriers in long-haul and LCCs in their short-haul markets?

Mr Mueller appears less than optimistic on the future for smaller FSCs, noting that “alliance partners are squeezing them out”. He adds that he has “no answer to help marginal network carriers”, but suggests that these concerns do not apply to Aer Lingus. His airline is not part of a global alliance and, he argues, it has a niche on the North Atlantic.

The importance of having a niche is echoed by Bombardier’s Mr Aliment, whose advice to smaller FSCs is “be nimble”. Mr Goudarzi Pour is reluctant to advise other airlines, preferring to discuss Lufthansa, for whom he believes it is important to stay focused on its strategy. He likens the German flag carrier to an elephant: “it takes time to get moving, but, once we do, we go very straight.”

Vueling’s Mr Cruz takes an almost psycho-analytical approach to advising smaller FSCs. “They need to acknowledge they have a problem,” he says, “[…] Once you admit you have a problem, the second step is to begin to deal with it. You have to solve the problem from within, not just say you are looking for a partner to solve it.” Perhaps inspired by the example of Iberia within the IAG group, he believes that this requires a large restructuring project. “This means pain,” he adds, “You need to realise you may lose your job…”.

Transavia’s Mr ten Brink offers an alternative solution. “When you are in danger, you either run or shelter,” he says, “If you don’t know where to run to, seek shelter,” by which he means seeking an acquirer.

The challenge here is that acquirers cannot always be readily found and, even if there is interest, it is often necessary to embark on a restructuring process first. Most potential buyers will want to see evidence that a target can make progress towards profitability before throwing money into what could otherwise be a bottomless pit.

Moreover, although there have been some notable examples of carriers from outside Europe taking stakes in European airlines, restrictions on ownership remain a hurdle to outright acquisition and most of the really significant intra-European deals have already been done. Restructuring looks set to remain as important as ever in 2014.