Europe to Latin America: why European airlines are practising their samba, salsa, tango and rumba

TAM will soon defect from Star to join its sister carrier LAN in oneworld. TAP Portugal’s future alliance membership is surrounded by uncertainty until its likely renewed privatisation process is complete. These developments throw the spotlight on the strategic importance of routes from Europe to Latin America to European carriers, who dominate this market, in particular the Big Three, but TAP Portugal, Alitalia and Air Europa also have noticeable positions. The South Atlantic market is only around one fifth of the size of the North Atlantic market by RPKs. So why should Latin America matter to European airlines?

In addition to forecast passenger traffic growth rates that, while not spectacular, are still very respectable and superior to those in Europe and on the North Atlantic, Latin America is a fascinating strategic battleground for Europe’s carriers, both directly and through alliances.

It is a territory of changing alliances and emerging players and, for those that are successful, market share gains can provide significantly higher growth then the underlying market.

Traffic between Europe and South America, as measured by RPKs, grew at an average rate of 8.1% p.a. between 2003 and 2011, compared with a world average rate of 5.8% (source: Boeing). In the global crisis year of 2009, traffic on the South Atlantic held up well according to Boeing data, growing by 5.5% in spite of a 2% fall seen globally. Data from the Association of European Airlines (AEA) show a fall of 4.6% in RPKs on the South Atlantic for its members in 2009, however, and, given that they account for more than 80% of passenger numbers, it seems unlikely that the whole market could have grown by 5.5% in 2009.

Nevertheless, the AEA data suggest that growth on the South Atlantic has generally out-performed against total world air traffic. Adding in the Mid Atlantic to get total traffic from Europe to Latin America and the Caribbean, AEA data show slower growth than on the South Atlantic, but still on average faster than world traffic growth. 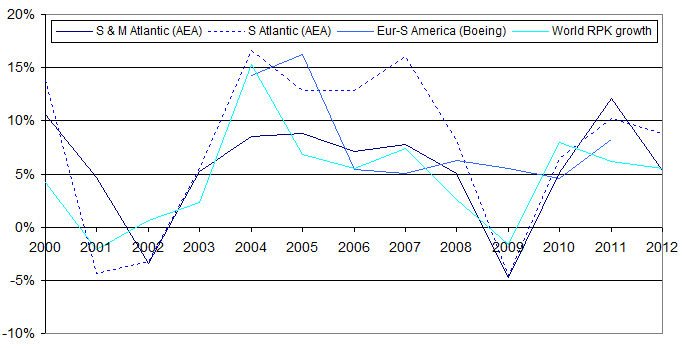 Load factor has improved significantly, but is off the 2007 peak

Load factor data from AEA for the South Atlantic and Mid Atlantic combined show an improving trend since the early 1990s, when they were around 67%. After an 18ppt gain form 1991 to 2007, load factors have levelled out and, at 84.3% in 2012, they were slightly below the 84.7% peak of 2007. This suggests load factors are near their maximum operational limits. Load factor dipped in 2008 and 2009 in the global downturn, but since then it has gained 3.4ppt in three years. 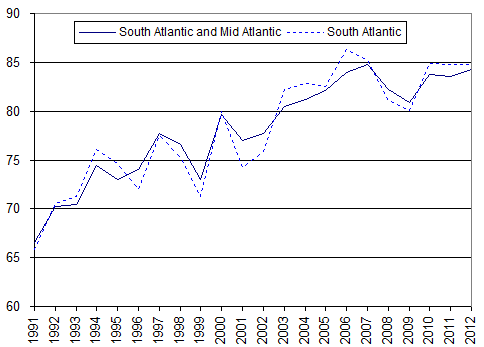 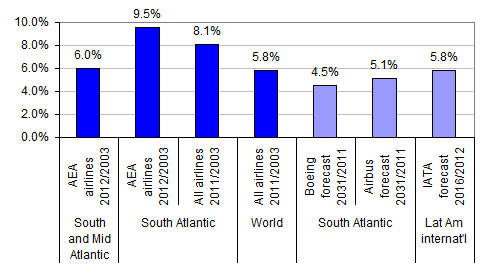 Europe to South America represented only 1.7% of global RPKs in 2011, according to Boeing and this is forecast to fall slightly to 1.6% in 2031. 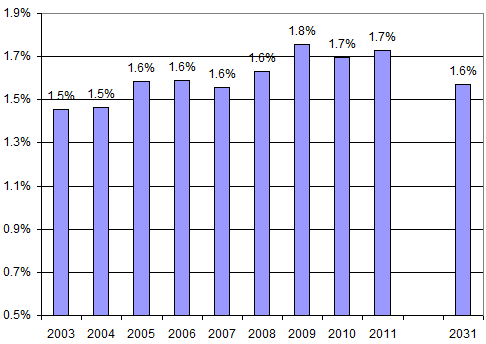 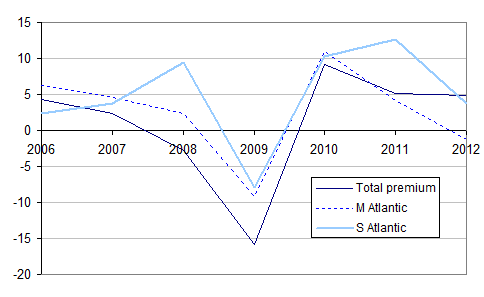 Central and South America, excluding the Caribbean, remains a relatively attractive market from the point of view of overall traffic growth and premium traffic. 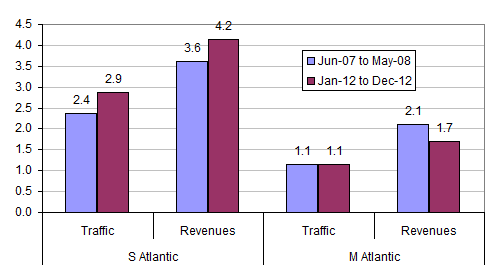 Europe to Latin America is dominated by European airlines

European carriers continue to dominate routes between Europe and Latin America (including the Caribbean), having 81% of passengers in 2011 according to data from the Latin American and Caribbean Air Transport Association (ALTA). This share has bounced around over the years, but there has been no fundamental shift in this European dominance.

Innovata data put European carriers’ share of seats at 83% for the week of 25-Mar-2013. Excluding the Caribbean from the picture, European carriers share on Europe to Latin America is only a little lower at 81%. 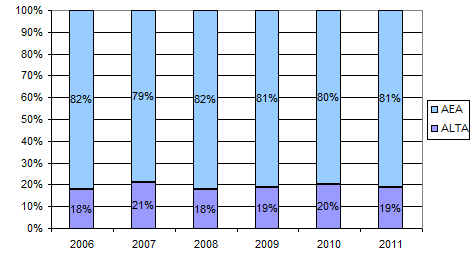 Airline groups from Latin American and the Caribbean account for only five of the top 15 airlines groups on Europe-Latin America routes, ranked by seats, although LATAM make the top three, pushing the Lufthansa Group into fourth place. The clear leaders are Air France-KLM, with a 22% share of seats, followed by IAG with 18%. The European Big Three have 47% between them.

If the leisure-oriented Caribbean is excluded from the data, then IAG and Air France-KLM swap places, but are almost on identical shares at around 22% of seats. LATAM and Lufthansa remain in third and fourth places respectively, both with around 10%, and TAP Portugal is hard on their heels with 9%. The Big Three have 54% of this market between them.

SkyTeam is the leading alliance, while Star will suffer from TAM’s defection to oneworld

In terms of the global alliances, SkyTeam is the clear leader on Europe to Latin America, with almost 35% of seats, followed by Star and oneworld on 22% and 20% respectively (both of the latter having a smaller share than the combined non-aligned carriers). The transfer of TAM Airlines from Star to oneworld later this year will boost the latter’s share by almost 5ppts and leave Star a very distant third.

Taking the Caribbean out of the equation (where both SkyTeam and oneworld are strong, but Star is weak), SkyTeam remains the leader, with 37%, but Star moves into second on almost 31%, with oneworld on 26%. Non-aligned carriers are left with a measly 7% share of seats on Europe to Latin America excluding Caribbean. The addition of TAM to oneworld will see it pushing SkyTeam hard for the leadership spot.

The destiny of TAP Portugal, whose privatisation process may soon be restarted, could be critical to the relative fortunes of the global alliances on Europe to Latin America ex Caribbean. German Efromovich is expected to bid again, either through Synergy Aerospace as previously, or through its subsidiary (and Star member) Avianca Brazil.

If he is successful, then Star will live to fight another day, but if the Portuguese carrier ends up taking its 9% share of seats out of the Star alliance, it will hand outright leadership to the alliance it joins and consign Star to ‘also ran’ status.

Each of Europe’ Big Three has a different position and different priorities in Latin America. IAG has more destinations overall to Latin America than the other European groups, but, while Iberia focuses on Central and South America, British Airways takes the lead on the leisure-oriented Caribbean. Air France-KLM has a better balance in terms of the number of destinations between Air France and KLM both in the Caribbean and in mainland Latin America and the Lufthansa Group remains in a rather distant third place among the Europeans, with little in terms of cultural or historical ties to the region. 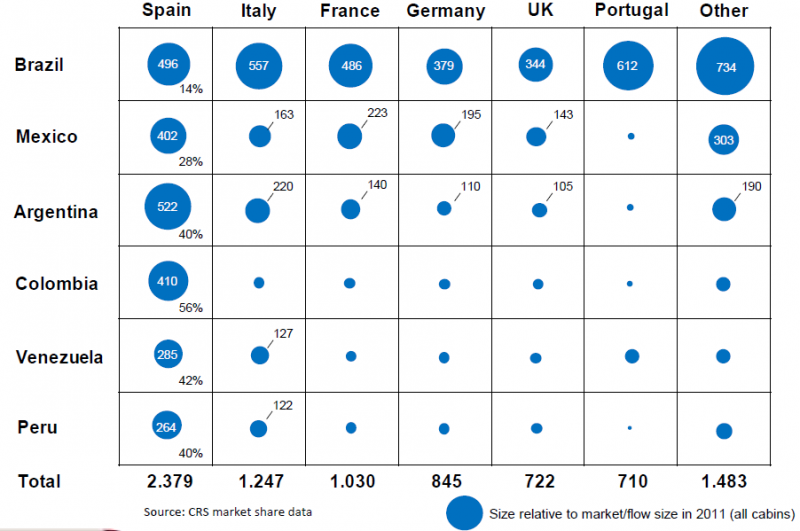 Iberia is vital for IAG to dominate Latin American routes

The most important European country on routes to Latin America is Spain, due to its historical, cultural and linguistic links and because of its geographical positioning in the south west of Europe. Iberia is by some distance the leading carrier from Spain to Latin America, with more than twice the seat capacity of number two player Air Europa. In turn, Latin America gives Iberia its greatest natural strength and the carrier has 23% of its international seat capacity and 19 destinations in the region.

However, while it is likely that Spain will retain is position as the leading European market to Latin America, Iberia cannot take anything for granted and so its current restructuring programme is crucial. Without feed for its long-haul network, it will wither away and so its plans to make its short/medium-haul network more efficient will have a direct bearing on its ability to retain its strong position to Latin America. Without a strong Iberia, IAG would be left with BA’s mainly Caribbean-focused activities and a much weakened presence in Central and South America. Natural flows from Spain, rather than routing through London, would eventually be absorbed by other competitors, an unthinkable scenario for IAG. The Alitalia/Air France-KLM scenario is much less likely for Iberia/BA.

Iberia’s IAG sister company British Airways leads the market from the UK to Latin America, but the margin of leadership from number two player Virgin Atlantic is less than for any other big European flag carrier. It will be a relief to BA that the third placed airline, TAM is to join the oneworld alliance (although the level of cooperation remains to be seen). BA has 17 destinations in Latin America, but 13 of these are in the Caribbean as it has more or less left mainland Central and South America to Iberia.

Italy also has strong cultural links with parts of Latin America and Italy-Latin American is an important market in terms of traffic flows, mainly Italy-Brazil. However, Alitalia only has five destinations (Buenos Aires, Caracas and three in Brazil: Rio de Janeiro, Sao Paulo and Fortaleza) and only 5% of its international seat capacity in Latin America. Alitalia has long been relegated to a junior partner feeding the Paris hub of fellow SkyTeam member and 25% shareholder Air France.

Air France has 17 destinations in Latin America and it leads the market from France to the region by a bigger margin than Iberia does in Spain, benefiting from feed from sister company KLM (which has 14 Latin American destinations) and SkyTeam partner Alitalia. Seven of Air France’s destinations are in the Caribbean, reflecting to some extent France’s colonial past. Unlike Iberia, Air France (and KLM) has strengths across the globe in terms of its long-haul network.

And Star needs TAP Portugal to remain in the team

Although Lufthansa is the clear leader in Germany to Latin America, the region is an area of relative weakness to the Lufthansa Group. Lufthansa itself has only six destinations in the region, SWISS one (Sao Paulo) and Austrian none. Instead, it must rely on partners to expand its Latin America offer to its passengers. As noted above, however, the Star Alliance is suffering a heavy blow with the defection of TAM to oneworld and it will be vital for it to secure the ongoing membership of TAP Portugal after the latter’s restarted privatisation process.

*of which eight in Brazil. **of which four in Brazil
Source: CAPA – Centre for Aviation

Since the decline and subsequent demise of Varig and the continuing weakness of Aerolineas Argentinas, Latin American airlines have been little more than bit players in the healthy European markets. Despite a recent slowdown in the Brazilian and Argentinean economies, the fact of their future growth is not at risk. These are economies that must grow.

Whether LATAM will become more focused on Europe, as US airlines forge stronger inroads into Latin America, is for the future. At present the focus will be on consolidating in its home markets and responding to US competition.

For Europeans though, the market is there to be lost – or won – with a lot riding on Iberia's recovery and on TAP Portugal's eventual resting place.