Rising oil prices focus airline management on the need for the latest generation of fuel efficient aircraft. For the bulk of airlines and the bulk of routes, where narrowbodies dominate, this means the Airbus A320neo and Boeing 737MAX families.

However, the 737 order backlog currently stands at around nine years, and the A320 backlog is 12 years (based on 2017 delivery numbers and current orders outstanding). Increases in production rates help to ease the backlog, but problems with engine delivery work against this.

Europe has more A320neos than 737MAXs in service

In Europe, and globally, the A320neo family is more popular than the 737MAX.

The Turkish LCC Pegasus Airlines is the biggest current operator of neos, with 18 aircraft in service. Only Pegasus, SAS (12 aircraft) and Lufthansa (10) have a double digit number of neos currently.

In addition to Pegasus, other LCC operators of the neo are WOW air and Primera Air. 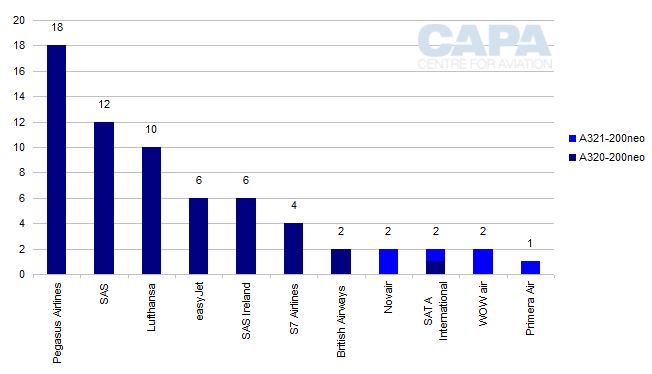 Norwegian is the biggest MAX operator, with six of the type (through its Irish-registered NAI subsidiary, which uses them for trans-Atlantic operations). 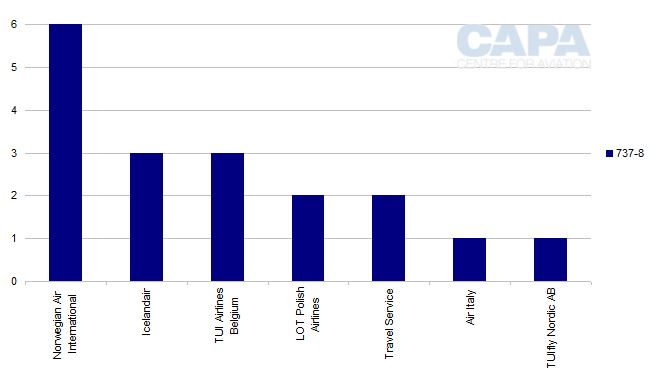 The A320neo family has more orders than the 737MAX in Europe

While fleets in service are still small, the neo's greater popularity in Europe than the MAX is more evident in its superior order backlog.

The neo orders are fairly evenly split between A320 and A321 variants, although the smaller cabin version is slightly ahead, with 558 orders versus 498 for the A321neo.

A large majority of the MAX orders are for the 737-8 variant, accounting for 414 aircraft. There are 37 MAX-9 orders and 17 MAX-10 orders, in addition to 114 MAX orders with no specified variant.

Wizz Air has by far the biggest outstanding order for neos in Europe, with 256 aircraft awaiting delivery (of which 184 are A321-200neos and 72 are A320-200neos). Wizz Air's orders are an important part of its strategy to lower its unit costs – through larger A321 aircraft and through more cost efficient new generation aircraft.

Norwegian plans to use its A321neoLRs for long haul routes, but is likely to sell or lease out its other A320 family aircraft as surplus to its own needs.

A further 10 European airlines have 10 or more orders for A320neo family aircraft (see chart below). 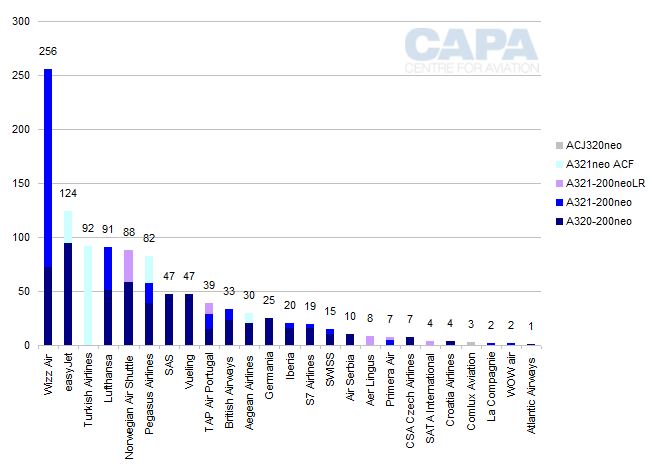 Ryanair is the biggest future 737MAX customer, with 135 outstanding orders that are all for the MAX-8, followed by Norwegian, which has 104 MAX-8 orders (in addition to its six already in service).

A further seven European airlines have 10 or more orders for 737MAX aircraft (see chart below). 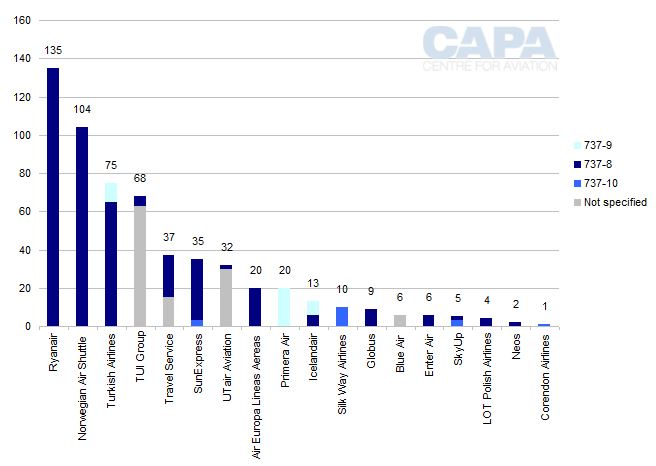 Europe is the number two region globally for A320neo aircraft in service and the number three region for the 737MAX.

Asia Pacific is the leading region in both cases, while (perhaps not surprisingly) North America is ahead of Europe for MAX aircraft in service.

Globally, there are 290 neos in service versus 126 MAXs. There are more neos than MAXs in service in every region with significant numbers of either, apart from North America.

Globally, there are 4,361 neos on order versus 3,356 MAXs. There are more neos than MAXs in service in Asia Pacific, Europe and Latin America, but the reverse is true in North America, Middle East and Africa (where order numbers are low).

Note that there are 1,665 A320neo orders and 1,582 737MAX orders with no specified region. This is either because the operating airline has not been disclosed, or because the orders are for lessors, with no operator yet identified.

The ratio of neo orders to MAX orders in Europe is 1.8 times, more than the global average of 1.3 times and second only to Latin America, where it is 2.2 times.

The A320neo is the more popular type with LCCs globally, and especially in Europe

Globally, the previous generations of the A320 family and the 737 have a similar level of popularity with LCCs.

However, among the new technology variants, the neo is currently much more popular than the MAX with LCCs. Globally, low cost airlines account for 46% of A320neos, but 31% of MAX aircraft (combining those in service with those on order) – similar to the LCC share of 737Classic/NG aircraft.

In Europe, LCCs are even more skewed towards the neo, in spite of their previous preference for 737NG/Classics over the A320ceo family.

Europe's LCCs operate 49% of the region's older 737 types, but account for only 30% of its A320ceos. LCCs have 42% of MAX aircraft (in service and on order) in Europe, which is a higher share than the global average, but less than their share of Classics & NGs.

LCCs' 56% share of A320neo family aircraft in Europe is higher than their share of MAXs and a significant step up from their 30% share of A320ceo types. 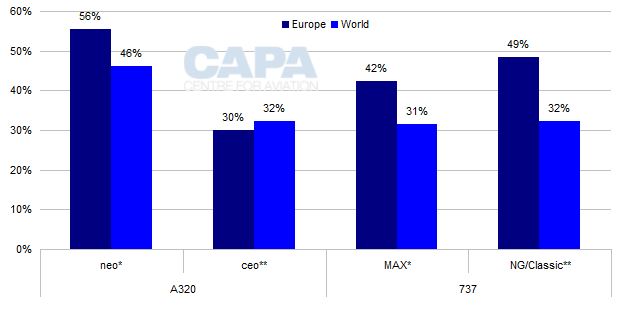 For airlines that have not yet ordered, delivery slots will be distant

It is possible that the importance of Europe's LCCs in narrowbody order books, particularly for the A320 family, may be overstated.

For example, it may be that the LCCs are further ahead in the order cycle, and that full service airlines will catch up. Moreover, one or two mega-orders by LCCs such as Wizz Air and Norwegian serve to skew the figures.

Nevertheless, for those full service airlines wishing to get their hands on new generation aircraft that have not yet placed orders, delivery slots will be far into the future.

As oil prices rise (if they continue to do so), this hands greater advantage to LCCs over their higher cost competitors.