On 26-Feb-2021 a coalition of European aviation trade associations published 'Destination 2050', a plan to achieve net zero carbon dioxide emissions by 2050. The target covers all flights within and departing from Europe (specifically the EU, European Free Trade Association and the UK).

It plots a path to reach this target through a combination of new technologies, improved operations, sustainable aviation fuels and economic measures.

The target of net zero emissions by 2050 puts the European aviation industry ahead of the global aviation target to halve carbon emissions (relative to 2005 levels) by 2050.

The next CAPA Live event on 10-Mar-2021 will include discussions with a number of leading industry figures on the theme of 'Sustainable Aviation: Restoring travel in a responsible way'.

IAG was the first airline group to commit to net zero

Even before the publication of Destination 2050, individual airline groups have previously adopted the net zero emissions target, taking them ahead of the global aviation target to halve emissions by 2050.

In 2019 IAG was the first airline group in the world to adopt a target of net zero emissions by 2050.

Others, including Qantas, American Airlines, Cathay Pacific and Qatar Airways have also set this target.

The Paris Agreement did not include aviation, but it led to a UN target of net zero emissions

These and other airlines were responding to growing pressure from public opinion in the wake of the Paris Agreement on climate change in 2015.

The agreement did not include aviation, but it led to the adoption by the United Nations of a zero net emissions target by 2050 for the wider global economy.

In Jun-2019 the UK became the first major economy to make a legal commitment to this target for its economy. Other European nations soon followed, and the European Union committed to this net zero target in Dec-2019.

The world aviation industry had set its target of a 50% reduction by 2050 as long ago as 2009 (through the International Civil Aviation Organisation, a UN agency). It was one of the few global industries to adopt such a target, which then looked very ambitious and ahead of most other industries.

However, this was overtaken by the wider UN target of net zero and a growing threat of a public opinion backlash against aviation in the year leading up to the COVID-19 pandemic.

The industry was increasingly under the spotlight – not least because of high profile public campaigns such as the 'flight shame' movement that started in Sweden.

Aviation's once ambitious target to halve emissions by 2050 has become increasingly vulnerable to the changing tide of public perception.

Nevertheless, the 50% reduction target remains the official goal of the global airline trade body IATA, in addition to leading regional associations such as Airlines For America.

The plan uses analysis carried out by Royal Netherlands Aerospace Centre and SEO Amsterdam Economics of flights within and departing from Europe.

Its modelling envisages a reduction of 293 MtCO2 (Metric tons of carbon dioxide equivalent) in 2050, compared with a hypothetical reference scenario where no sustainability measures are implemented.

The biggest contributor to this reduction is improvements to aircraft/engine technology (37% of the total reduction, split between hydrogen powered aircraft, 20%, and kerosene/hybrid electric, 17%), followed by sustainable aviation fuels (34%).

ATM/aircraft operations contribute 6% of the reduction and economic measures contribute 8%.

In addition, the costs of implementing these pillars is assumed to lead to increases in air fares. This contributes 15% of the modelled emissions reduction through lower demand, while maintaining a compound average annual growth rate in passenger numbers of 1.4%. 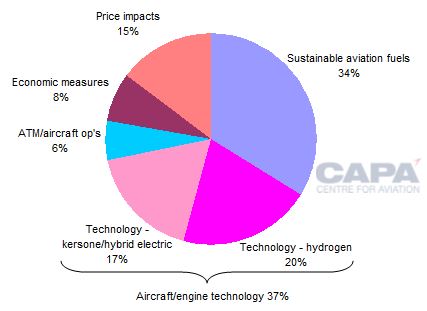 Technology is by far the most important overall factor for cutting carbon emissions, embracing both aircraft and engine technology and sustainable aviation fuels.

Aircraft/engine technology improvements includes both evolutionary change to 'upcoming aircraft' (i.e. aircraft models already available or in the pipeline that are more efficient than most of the installed fleet) and next generation future aircraft types.

A hydrogen-powered single aisle aircraft, modelled to be introduced in 2035, would have zero carbon emissions.

The plan models the use of sustainable aviation fuel (SAF), growing from negligible levels today to 6% of total fuel volume in 2030, and then to 83% in 2050. On an average life cycle basis, SAF cuts CO2 emissions by close to 100% in the modelling.

The challenges for SAF are the development of industrial production capacity, helping to increase availability and reduce prices, and a supportive government policy framework.

Improvements in air traffic management and aircraft operations are expected to be an important short to medium term source of cuts in carbon emissions, pending bigger step changes from technology.

The biggest impact would come from the completion of the Single European Sky. Improved efficiency of ATM and the decarbonisation of ground operations, including electric towing and taxiing of aircraft, are also important elements.

Economic measures – putting a price on carbon emissions through emissions trading and offset schemes – are an important measure in cutting aviation's net emissions in the short term.

They will also play a role in balancing out any remaining emissions in 2050 after the technological improvements mentioned above have been implemented.

The four pillars described in Destination 2050 are broadly the same as those used by the global aviation industry in its plans to halve emissions.

European aviation is able to be more ambitious for a number of reasons. These include its slower projected traffic growth rates, given its higher level of maturity as a market; a greater feasibility of substitution by rail travel; and greater political will.

This last point is crucial. The Destination 2050 document maps out a possible pathway to net zero emissions. It demonstrates that the target is achievable, but it is not a guarantee of success.

Policy makers in the European Union and in Europe's national governments need to back their aviation industry's decarbonisation plans with regulatory, investment and fiscal incentives.