In the past week there has been another batch of headlines about flight cancellations and airport capacity caps, including at British Airways, Wizz Air, KLM, Lufthansa and Heathrow Airport. Staffing shortages across much of European aviation have limited the industry's ability to meet pent-up demand as the summer peak approaches.

This helps to explain why Europe's capacity recovery as a percentage of 2019 levels has been range-bound for eight weeks.

Europe's passenger traffic is recovering at a slower pace than capacity – at least, it was up to the most recent monthly traffic data in May-2022. Nevertheless, passenger load factors were improving, and this trend is likely continuing into the summer peak, partly thanks to cancellations.

In the week commencing 11-Jul-2022, total European seat capacity is scheduled to be 31.8 million, according to OAG schedules and CAPA seat configurations.

This week's total seat capacity for Europe is split between 7.5 million domestic seats, versus 8.1 million in the equivalent week of 2019; and 24.3 million international seats, versus 28.8 million.

Europe remains in fifth place in the ranking of regions measured by seats as a percentage of 2019 levels this week.

Asia Pacific, Latin America and Middle East have taken upward steps in the trend this week, whereas North America, Africa and Europe have taken downward steps. 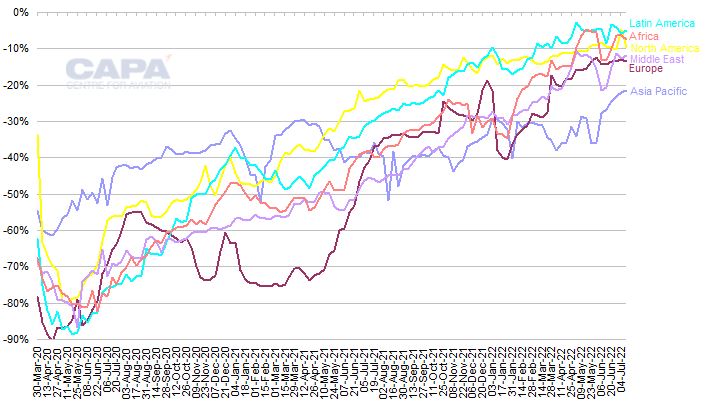 There has been a slow, but steady, trimming of 3Q schedules as a result of staffing challenges in the industry.

Over the past week Wizz Air has trimmed its peak summer schedule by 5%, British Airways has cut an additional 10,300 flights from London airport schedules between Aug-2022 and Oct-2022, and Heathrow is reviewing schedules submitted to it by airlines.

Further trimming to bring 3Q2022 in line with the 86% to 87% range of the past eight weeks seems likely.

Europe's passenger traffic is recovering at a slower pace than capacity

As noted above, Europe's capacity recovery has been on a plateau for nearly two months.

Data on traffic lag capacity data – monthly passenger data are available only up to May-2022 – so it is not yet possible to determine whether or not the traffic recovery is also treading water.

This indicates that passenger traffic continued to recover at a slower pace than capacity, as has been the case throughout the pandemic. 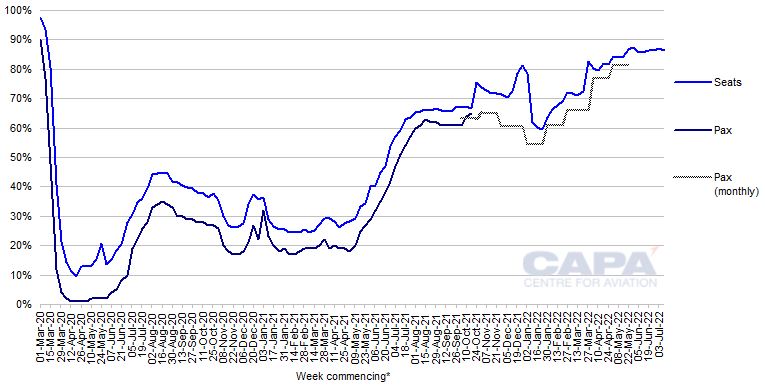 Passenger load factors were improving as of May-2022…

Nevertheless, IATA data on load factors show that the gap was narrowing – at least up to May-2022.

Relative to load factors in the equivalent month of 2019, the gap narrowed from 10.0ppts in March, to 5.7ppts in April and 3.0ppts in May.

…and improvement is likely continuing into the summer peak

Monthly traffic data for Jun-2022 are not yet available, but OAG/CAPA seat data show that there was not much change in capacity as a percentage of 2019 levels from May-2022.

It seems likely, however, that the trend of load factor improvements continued into Jun-2022.

The trends reported by these low cost airlines cannot necessarily be extrapolated across all of Europe's airlines. However, they provide some support to the hypothesis that load factor continued to improve into Jun-2022, even if the pace may have slowed.

Recovering demand into the summer season should anyway have led to improving loads, which were likely further boosted by flight cancellations and consequent rebooking onto other flights.

These factors can be expected to lead to further load factor gains into Jul-2022 and Aug-2022.

However, to sound a note of caution, continued headlines about flight cancellations and schedule reductions could eventually start to erode demand.