According to UNWTO research, Europe is ahead of other regions in easing travel restrictions as the region moves into what is historically its peak quarter for aviation. Moreover, World Health Organisation data on weekly COVID-19 case numbers in Europe have fallen from their Apr-2020 peak.

Europe's total airline seat capacity is scheduled to have been reduced by 71.9% year-one-year in the week commencing 29-Jun-2020, according to schedules from OAG combined with CAPA Fleet Database seat configurations.

Europe's cut is 7.7ppts narrower than last week's 79.7% drop and the fourth consecutive week of a tightening trend.

However, the curve of Europe's COVID-19 case numbers is no longer falling, and a Jun-2020 survey by IATA shows that worldwide traveller confidence has slipped since Apr-2020.

Summer 2020 schedules continue to be trimmed, but this year's summer peak will not be like any other year for Europe's airlines.

Europe's domestic seats have been cut by 49.4% year-on-year (compared with last week's -62.2%). This brings domestic capacity to more than 50% of last year for the first time since Mar-2020.

The 71.9% year-on-year cut in total seats this week is the 15th week of very heavy double digit percentage (more than 50%) declines in seats.

This compares with -79.7% in the week of 22-Jun-2020 and continues the modestly improving trend since the period between mid April and late May, when the underlying rate of reduction was in the region of 90%.

Africa and Latin America have deeper cuts than Europe

For the first time, Africa has the deepest cuts, with seat numbers down by 77.4% this week. However, Latin America's capacity is down by almost the same percentage, by 77.1% (its deepest cut so far).

Seats have been cut by 65.2% in Middle East, 62.9% in North America and 45.7% in Asia Pacific. Capacity in Asia Pacific continues to see-saw above and below 50% of last year's levels over recent weeks. 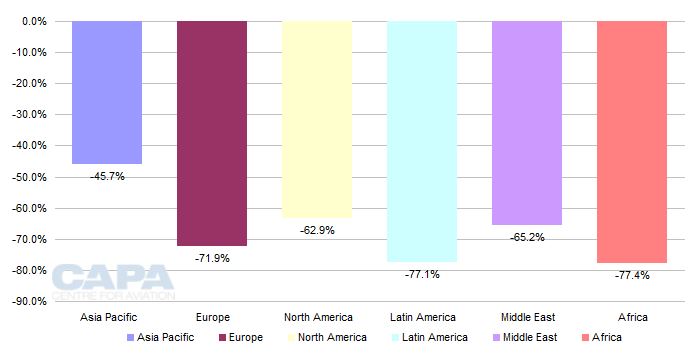 All world regions are implementing a narrower cut in capacity compared with the previous week.

In addition, all are experiencing a week-on-week increase of double digit percentages, led by Europe's 39.3% growth and Latin America's 37.3%. 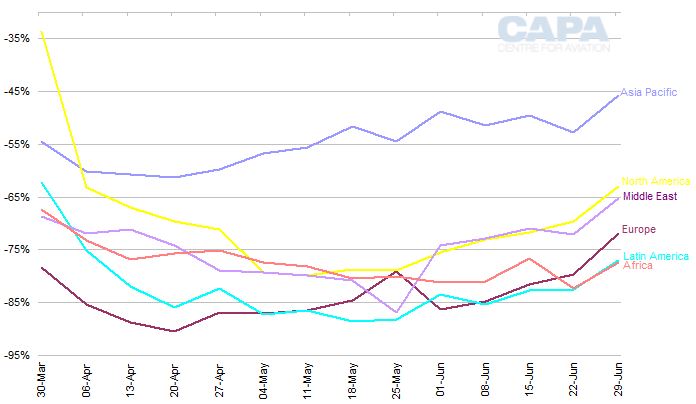 In percentage terms, this week's capacity increase compared with last week is the biggest since the crisis began.

However, the capacity scheduled for the week is lower than was projected a week ago for this week.

This is the first time during the crisis that the current week's capacity has been lower than was projected for it a week earlier. 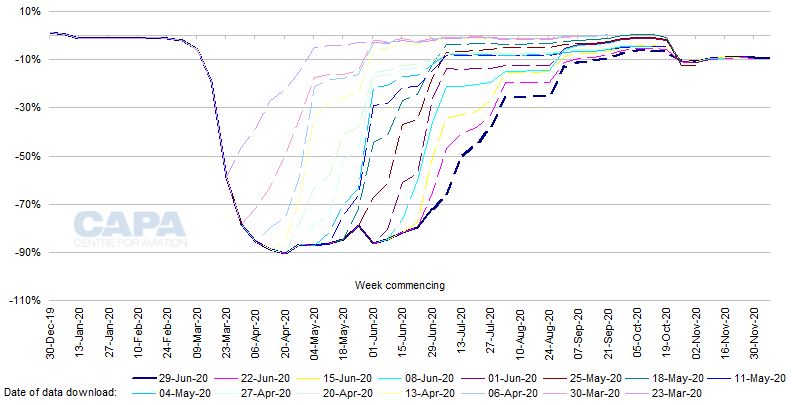 Future schedules continue to be trimmed with each passing week.

Capacity for Jul-2020 is now projected to be down by 58% year-on-year, compared with a 48% decline anticipated last week. The outlook for Jul-2020 capacity implied by filed schedules data has fallen by 45% over the past three weeks, and by 20% since last week.

Projected capacity for Aug-2020 has been trimmed by 8% since last week and is projected to be 26% below capacity in Aug-2019.

Projected Sep-2020 seat numbers have been lowered by 2% since last week, but are still expected to be within 11% of Sep-2019 levels.

For 3Q2020 as a whole – normally the peak quarter of the year – European seat numbers derived from schedules filed with OAG are projected to be 32% below the same quarter of 2019, i.e. at 68% of last year's level (compared with 74% projected a week ago).

However, capacity projections implied by schedules for the early part of the winter 2020/2021 season are showing a growing disconnect with likely reality.

Nov-2020 capacity derived from OAG schedules has increased slightly since last week. It is currently projected at 90.5% of 2019 levels, compared with 90.1% projected a week ago.

Europe is ahead of other regions in easing travel restrictions

The week-on-week increase in European seat capacity this week partly reflects the easing of travel restrictions, which is set to gather pace in early Jul-2020.

According to UNWTO research at 22-Jun-2020, 37 countries in Europe have started to ease restrictions, including 24 of the 26 Schengen member states. This makes up the large majority of the 48 countries worldwide where easing has begun (22% of all destinations worldwide, up from just 3% on 18-May-2020).

In Africa, borders remain closed to tourists in 85% of destinations, while the figure is 76% in the Americas, 67% in Asia Pacific and 92% in the Middle East.

The easing of restrictions is good news for Europe if the very large intra-European international airline market (which accounted for 50% of seats in 2019) opens up.

Europe's lead on restrictions is partly a reflection of some coordination within the EU and the geographical proximity of Europe's nations to one another.

By contrast, WHO data indicate a more clearly rising trend is still prevalent in the Americas, South East Asia and Africa.

…but the curve is no longer falling…

However, Europe's weekly count has since risen slightly and has been hovering around 130,000 in each subsequent week. This has coincided with an easing of several domestic lockdown restrictions in many European countries.

The flattening of the curve of case numbers in Europe may have an adverse impact on consumer appetite for travel, particularly if numbers start to rise more appreciably.

…and traveller confidence is slipping

According to IATA on 26-Jun-2020, passenger confidence is slipping anyway.

In a Jun-2020 IATA survey, only 45% of respondents indicated that they would be likely to return to travel within a few months of the pandemic having subsided – down from 60% in the Apr-2020 survey.

Around 50% of respondents said they would wait six months to a year (up from 36%) and 5% said that they did not intend to travel at all in the foreseeable future.

Return to travel after the pandemic has subsided (IATA surveys) 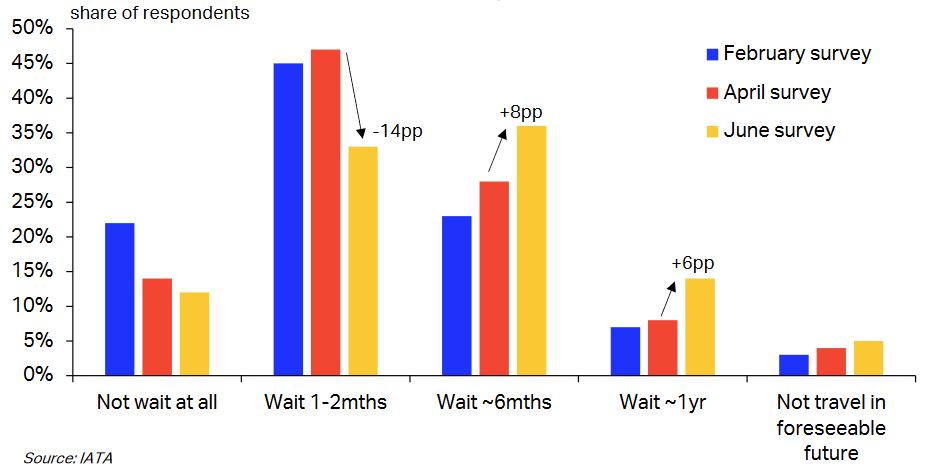 European aviation is now entering 3Q2020, the quarter containing what are usually the peak summer months for demand, profits and cash flow.