According to OAG/CAPA, airline seat capacity in Europe fell by 57.7% in 2020. This was the biggest drop among all regions, pushing Europe from second to third place by total seat numbers (behind Asia Pacific and North America).

Early suggestions of a V-shaped recovery gave way to hopes of a U and then a W shape. In reality, there is no letter of the alphabet to describe the curve that is inscribing itself. The crisis has lasted longer than expected at the outset and will remain for months to come. The new strain of coronavirus spreading in the UK is a reminder that COVID-19 will continue to pose fresh challenges.

Nevertheless, 2021 offers hope. The UK, normally Europe's biggest aviation market, was the first country in the world to approve and administer a COVID-19 vaccine. Many other European countries are now also beginning vaccination programmes.

As in 2020, a recovery led by domestic and other short haul markets and by VFR and leisure travel favours LCCs. They also (mostly) have better balance sheets and a more nimble approach to market entry and exit when demand fluctuates, as surely it will through 2021.

The 57.7% fall in Europe's seat capacity, from 1,661 million in 2019 to 703 million in 2020, was heavier than in all other regions, according to schedules from OAG combined with CAPA Fleet Database seat configurations.

By seats, Europe fell from second to third largest region

Asia Pacific remained the biggest region by annual seat numbers, but Europe was leapfrogged in second place by North America. Whereas Europe's capacity had been 18% bigger than North America's in 2019, it was 9% smaller in 2020. 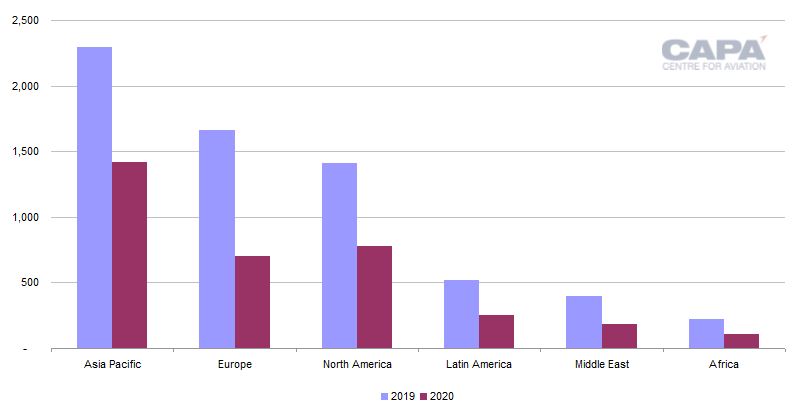 Weekly seat numbers in Europe suffered their biggest drop in late Apr-2020, when they fell by 90.4%. This was lower than suffered by any other region at any point during the year. Most of Europe was in a very strict lockdown and the majority of airline fleets were grounded.

Europe then staged a strong recovery as travel restrictions eased from Jun-2020, to reach a level of around 55% below 2019 levels for much of Aug-2020.

At that stage, only Asia Pacific and North America had narrower year-on-year declines.

However, an inconsistent and unpredictable patchwork of travel restrictions and quarantine rules and a further rise in COVID-19 case numbers in Europe led to a further slump in capacity.

Seat numbers were 74% below 2019 in late Nov-2020, before news of vaccine approval and some relaxation of quarantine restrictions in the UK helped to narrow the reduction to 61% in late Dec-2020.

However, this narrowing of the decline in Europe has been interrupted by a fresh surge in cases in the UK, resulting from a new strain of the coronavirus.

Moreover, it is the 42nd week of very heavy double digit percentage (more than 50%) declines in seats versus 2019.

Europe remains in last place behind the other regions

Ranked by the decline in weekly seat numbers and compared with the equivalent week of 2019, Europe has now spent 11 weeks at the bottom of the regional league table.

Only Europe and the Middle East have yet to reach the 50% threshold.

Year-on-year percentage change in passenger seat capacity by region: week of 30-Mar-2020 to week of 4-Jan-2021 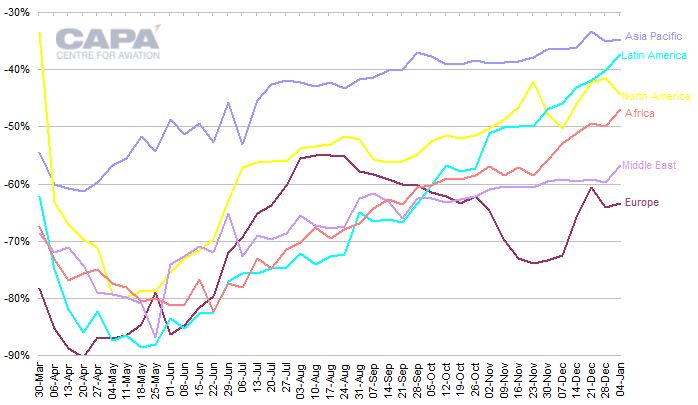 Europe's traffic decline has been worse than the capacity decline

Capacity data do not reveal the full extent of the decline in aviation in Europe.

The most recent data available, for the week commencing 6-Dec-2020, show an 82% fall in passenger numbers, compared with a 72% fall in seat numbers in Europe. 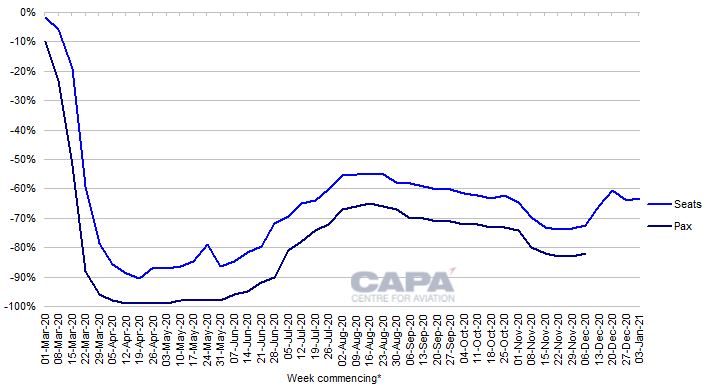 *Note: data for seat numbers is for the week commencing one day later than the date indicated for passenger numbers.
Source: CAPA - Centre for Aviation, ACI Europe.

Projected capacity in Europe derived from OAG schedules for Jan-2021 is projected to be at 32% of Jan-2019 seat numbers.

This suggests a continued stabilisation, although the trend throughout the crisis has been that the weekly capacity outlook has almost always fallen as each week comes nearer.

The shape of the capacity curve has many wrinkles, but it has consistently lengthened and flattened since the early projections of a sharp V-shaped recovery in Mar-2020 schedules for summer 2020.

Europe: percentage change in airline seat capacity vs equivalent week of 2019, with outlook at different dates* 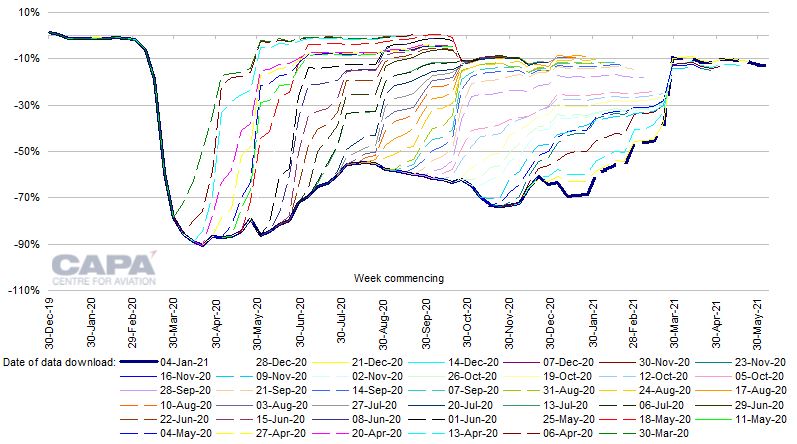 …but further cuts are likely

There are lockdown-like restrictions in much of Europe, but sharply rising COVID case numbers in the UK (and rising less sharply in countries such as Spain and Italy) mean that tighter restrictions are likely. In Dec-2020 many countries banned all but essential arrivals from the UK. In Jan-2020 the UK announced new lockdown measures.

Airline schedules for the rest of winter 2020/2021 look set to decline further.

Vaccines give some grounds for cautious optimism; LCCs are best placed

Nevertheless, as 2020 recedes into history, there are grounds for cautious optimism for European aviation in 2021.

Any meaningfully positive impact of vaccines on demand for air travel may still be some months into the future, but vaccination programmes are now under way.

The months ahead will be very challenging, and perhaps not all airlines in Europe will make it. The recovery in 2021 will depend on the timing, take-up and efficacy of mass vaccination, and on the continued application and development of biosecurity measures and COVID testing, as well as on the economy.

LCCs, with greater experience of moving in and out of markets according to changes in demand, and a greater focus on short haul and leisure segments, seem better able to adapt to the challenges. Moreover, with the exception of Norwegian, LCCs typically have better cash and liquidity than their legacy rivals in Europe.

There is still a long way to go, and the turning of the calendar from 2020 to 2021 does not in itself make any difference.

Nevertheless, whereas aviation in Europe (and elsewhere) ended 2020 much worse than it began, it should end 2021 in a better situation – particularly so for LCCs.