EU Transport Commissioner Adina Vălean has articulated what is common knowledge about airline demand in Europe: “Air traffic levels remain low, and more importantly, they are not likely to recover in the near future”.

She is not alone in her gloomy assessment. Ryanair CEO Michael O'Leary has reportedly predicted that the coming winter will be a "write-off".

Meanwhile, the summer slide in European capacity continues. The year-on-year cut of -59.2% in Europe's total seat numbers in the week commencing 14-Sep-2020 is the fourth consecutive week of deepening cuts. Sep-2020 capacity is projected to slip to 42% of 2019 levels, from 45% in Aug-2020.

Winter 2020/2021 schedules currently project European capacity at well over 80% of last winter, far exceeding likely demand. The European Commission's 14-Sep-2020 decision to extend the waiver of the rule requiring airlines to use 80% of their slots into winter 2020/2021 should lead to more realistic schedules.

Total European seat capacity is scheduled to be 14.7 million in the week of 14-Sep-2020, according to schedules from OAG combined with CAPA Fleet Database seat configurations.

This week's total is split between 5.6 million domestic seats, versus 8.3 million last year; and 9.1 million international seats, versus 27.8 million.

Europe's domestic seats have been cut by 32.0% year-on-year, compared with last week's -30.5%. This was the fourth successive downward step, but still the 12th week running with domestic capacity at more than 50% of last year's.

The 59.2% year-on-year cut in total seats this week is the 26th week of very heavy double digit percentage (more than 50%) declines in seats.

It is 0.9ppts wide than last week's 58.3% drop, and the fourth week of deepening cuts after 11 previous weeks of narrowing year-on-year percentage cuts.

Europe again has the third narrowest year-on-year cut in seat numbers this week.

Latin America continues to have the deepest cut, with a reduction of 66.2% year-on-year, below the Middle East, where seats are down by 63.1%. 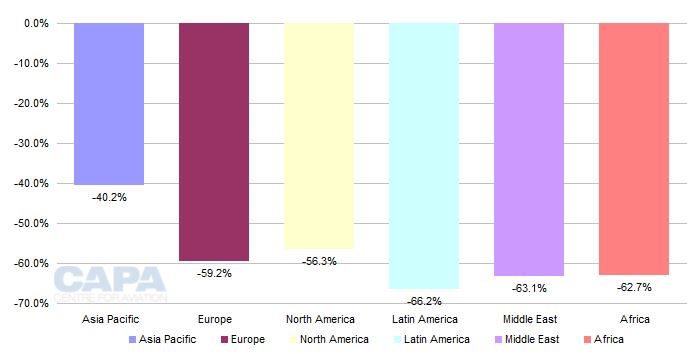 Asia Pacific and Africa have the clearest upward step this week; other regions are flat to down

Asia Pacific and Africa are taking upward steps this week, while the trend in percentage declines is flat to down in other regions.

Europe's four-week slide is a longer run of deteriorating year-on-year capacity changes than in any other region. 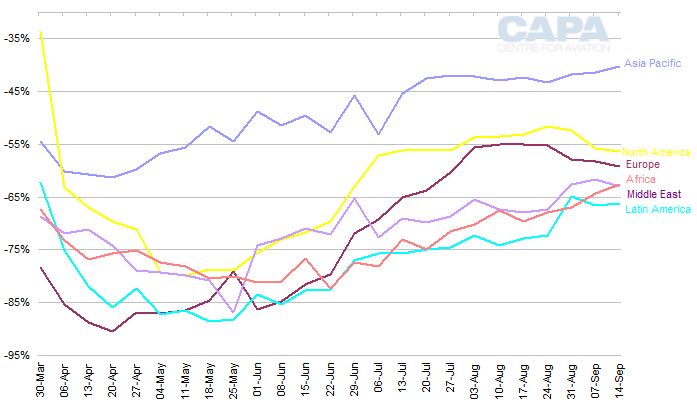 Further cuts have been made to September and October schedules…

Even three weeks into Sep-2020, projected seat numbers for the month continue to slide. They are 3% lower than expected last week and are now anticipated to be down by 58% year-on-year (compared with -57% projected last week).

This compares with a reduction of 55% in Aug-2020, making Sep-2020 the first month in the recovery to fall at a greater year-on-year rate than the previous month.

For 3Q2020 as a whole – normally the peak quarter of the year – European seat numbers derived from schedules filed with OAG are projected to be 60% below the same quarter of 2019, i.e. at 40% of last year's level.

Projected Oct-2020 seat numbers are 8% lower than expected last week are now anticipated to be down by 49% year-on-year (compared with -44% projected last week). That still looks high after the 58% decline for Sep-2020.

There are only small further cuts to the winter schedule this week.

This means that capacity for the final two months of the year is currently scheduled to be 84% of last year's levels.

The first two months of 2021 are currently scheduled to be at approximately 88% of the seat numbers of Jan-2020 and Feb-2020 (which were the final two months before schedules worldwide were heavily affected by the virus). 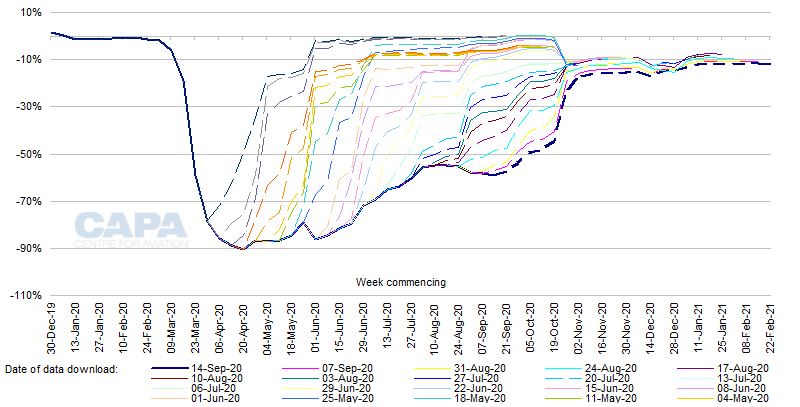 Given 3Q2020 capacity at only 40% of 2019 levels, the above analysis highlights, schedules currently filed with OAG for the coming winter season are unrealistically optimistic.

Moreover, capacity has been consistently above traffic since the post-lockdown recovery began.

Airlines are holding on to schedules for the winter season partly to give them the flexibility to choose which routes and frequencies to operate. They will adjust capacity downwards from currently filed levels according to the way that demand evolves.

The visibility of winter demand is very low

At this stage, it is very difficult for airlines to have a clear view of winter demand.

The so-called 'use it or lose it' slot rule has been a significant contributory factor in the high capacity levels currently filed in European airlines' winter schedules.

The EU rule requires that airlines must use 80% of their allocated airport slots at the approximately 100 slot-constrained airports covered by the bloc's regulations, or risk losing them in the same season of the following year.

The rule was suspended for the summer 2020 season, meaning that airlines could cut capacity dramatically without fear of losing their slots for next summer.

The decision by the European Commission to waive the rule for the winter 2020-2021 season was anticipated. Airline and airport representative bodies had campaigned for it, and had already agreed conditions to enable the waiver into the coming winter.

Nevertheless, with formal EC approval now granted, uncertainty on this issue has been removed. This should pave the way for more significant cuts to scheduled capacity this winter.