Etihad Airways appears to have re-gained momentum in 3Q2014, with passenger revenue growth of 26% outpacing its 16% increase in ASKs. This reverses the trend from 1H2014 when 14% passenger revenue growth was outpaced by a 19% increase in ASKs. The strong third quarter coincides with what is the peak travelling season in many of Etihad's markets, and is also Etihad's busiest period for growth.

Etihad does not release full figures, including costs or profits, so this report is based on the limited information available. A more thorough analysis would be possible with greater transparency. Based on revenue and passenger figures, Etihad appears to have had a stronger 3Q2014 than 1H2014. Passenger revenue of USD1.3 billion grew 26% from 3Q2013's USD1.03 billion. This was far faster growth than Etihad's 16% increase in ASKs, and an improvement on 1H2014 when passenger revenue growth of 14% was outpaced by a 19% increase in ASKs.

RPKs, load factors and unit revenue information was not disclosed and cannot be calculated based on available information.

The sharp variance between 1H2014 and 3Q2014 may be explained by the relatively weak performance in 1H2014 coupled with the strong performance of 3Q2014. In the nine months to 30-Sep-2014, passenger revenue comprised 67% of total group revenue. 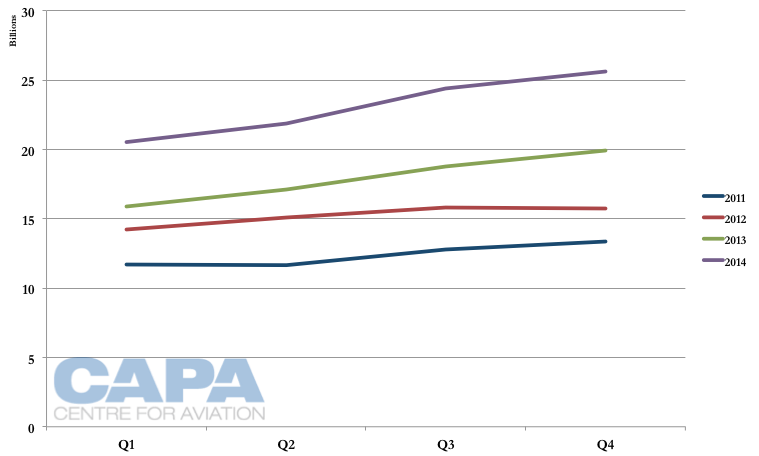 The important of the third quarter to Etihad's growth is apparent when looking at quarter-on-quarter comparison. In 2011, 2013 and 2014, the third quarter had the highest quarterly growth of the year. Etihad's 3Q2014 capacity is nearly 12% greater than in 2Q2014. 3Q2014 was Etihad's fastest-growing quarter in four years. 4Q2014 will see about 5% greater capacity than 3Q2014. 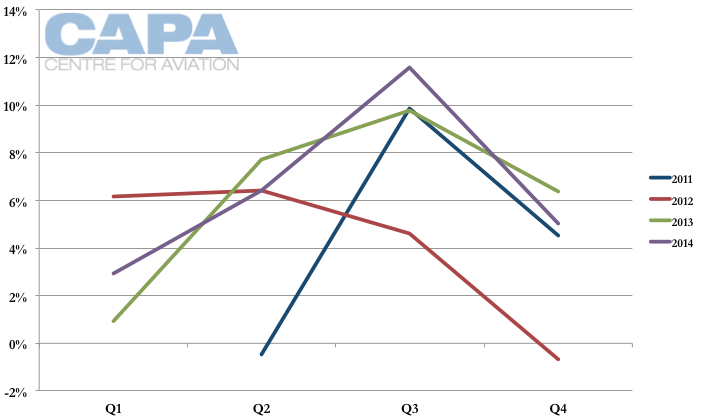 Partner revenue accounts for 27% of all passenger revenue 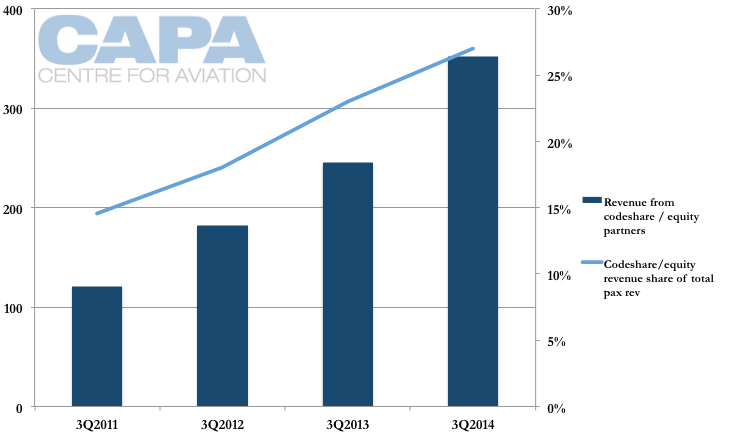 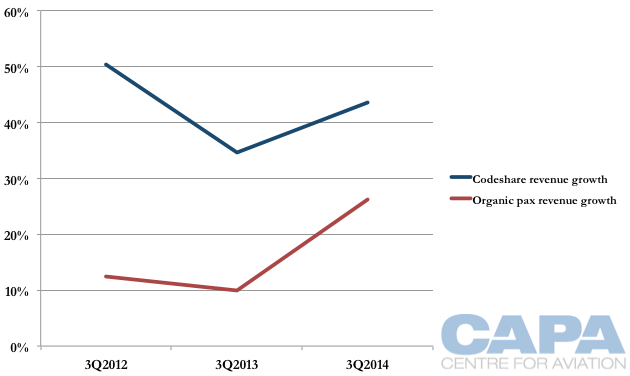 The outlook on revenue growth from partners is clouded with Germany rejecting plans from Etihad to codeshare on airberlin. Etihad's exact calculation of partner revenue is unclear, but presumably the codeshare rejection (if it stays) should not impact the revenue Etihad receives from partners. Etihad's proposed codeshares were for its flight number on airberlin, and not airberlin's code on Etihad – the latter of which would qualify as revenue from partners.

However, there could be a concern that restricting Etihad's placement of its code on other airlines could spread to other airlines being restricted on placing their code on Etihad. Such possible rescinding is not known to be actively considered, but the antiquated air transport regime has proven itself capable to innovate in twisted and absurd ways in order to achieve protectionist measured. The mere possibility of decreased liberalisation is negative enough; Etihad and its partners could benefit from greater codeshare access than they already have. The global trend is towards greater codesharing, and codeshare growth outpacing operating flight growth, as identified in Airbus' 2014 global market forecast.

Germany’s Luftfahrt Bundesamt (LBA) rejected Etihad Airways’ plans to codeshare on 34 airberlin services in the carrier’s winter 2014/2015 schedule, affecting around 46,000 bookings. The LBA, which evaluates codeshares for each seasonal schedule, rejected the plans on the basis that they violate Germany’s air services agreement with the UAE. The story appears complex as the codeshares were previously approved, with an Etihad Airways spokesperson stating: “Etihad Airways challenges the LBA’s decision to reverse earlier approvals for 34 existing codeshares…these codeshares have been consistently approved by the LBA, with the German Ministry of Transport’s full knowledge…for the last six seasons.”

airberlin CEO Wolfgang Prock-Schauer said: “This decision does not reflect our legal position and will shake the trust of passengers in these flight connections, which have been available for a long time.” Mr Prock-Schauer added: “As the financial impact will be borne mainly by Air Berlin, the airline will take all legal steps within its power to fight this decision.” Etihad said: “We are calling on the authorities to immediately reverse this unprecedented, unilateral and incorrect decision" while airberlin said it would would appeal the decision. In the interim, customers holding tickets for the codeshare services will have their bookings reissued without an Etihad Airways flight number.

3Q2014 saw Etihad commence services to Yerevan, Perth and Rome in addition to increasing frequencies on eight routes including Dublin, Athens and Chennai. Growth in the remainder of the year includes Phuket in Oct-2014 (replacing airberlin's Abu Dhabi-Phuket tag), San Francisco in Nov-2014 and Dallas in Dec-2014. Dec-2014 will also see Etihad take its first A380 and 787 that feature its new products and livery.

The fourth quarter may provide Etihad an opportunity to have revenue growth continue to outpace capacity growth, helping to reverse the trend from earlier this year. Etihad's full-year results, for which the airline expects a profit, will be closely watched.

While Etihad may not match Emirates' disclosures, it is still ahead of Qatar Airways, although Qatar has said it will commence regular financial reporting in 2014. Providing transparency will begin to take away the fire detractors use to limit the growth of Gulf carriers. As shown by the examples of Air France-KLM and Air Canada, working on relationships means detractors can become partners.

The use of 70 year old protectionist rules to intervene in today's trade regimes to impase inertia is highly questionable as a public interest issue. But such is apparently the residual influence of some national airlines in directing national policy that there is now a substantial shift towards reversing much of the liberalisation movement of recent years. Etihad is not the only target of this use of arcane technicalities that exist in old bilateral air services agreement; indeed Emirates is usually the first in the firing line for indiscriminate opposition. Most usually the detractor airlines are unable to match the competitive nature of the Gulf carrier products and using the opportunities offered by the old bilateral agreements becomes an effective means of stifling competition.

The same is not possible with the "third Gulf carrier" Turkish Airlines, which is also now even more powerful than the Gulf airlines in the German market. Its bilateral access is not so easily contestable, even if its strength in the market has forced Lufthansa to break off its previously close working relationship with the German flag carrier.

The major US airlines too are lining up to take potshots as they seek to exclude the new, highly competitive models that are threatening the status quo.

Etihad, with its new generation partnership model, is an easy target in this respect. Its model is futuristic and, regardless of challenges over subsidy and other matters, offers new options for improving the global effectiveness of air services. There is little point in preventing the industry's evolution - in various directions - merely to achieve the goal of enforcing the status quo. But aviation, sadly, holds a mystique that seems to support such oblique interventions.