Ethiopian Airlines will extensively expand its network in 2013, adding Asian destinations as well as increasing its footprint in Africa and linking the two high growth regions to South America.

In Africa, Ethiopian added flights to Blantyre in Malawi and Ndola in Zambia on 31-Mar-2013, increasing its African network to 45 destinations, including 16 domestic points. The carrier also has begun negotiations with the Malawi Government to take a 49% strategic stake in failed flag carrier Air Malawi after being selected as the preferred bidder among eight chosen applicants.

The Asian network will be expanded with the addition of Ho Chi Minh City, Manila and Seoul Incheon in Jun-2013 operating from Ethiopian’s existing Asian hubs, Hong Kong and Bangkok. And Ethiopian will become the first African carrier to take advantage of the natural transfer traffic synergies that link the three regions, and form part of its strategy to develop its Addis Ababa base into a Dubai-style hub of Africa.

Ethiopian is thickening up its regional network as it expands long-haul operations. The carrier launched three times weekly service to Blantyre, Malawi’s commercial and industrial capital as its 44th African destination on 31-Mar-2013 using a Boeing 737-800 aircraft.

Ethiopian already operated to Lilongwe in Malawi via Lubumbashi in the Congo four times weekly. From 31-Mar-2013 the Lilongwe service moved to a daily service, with the addition of three times weekly frequency via Blantyre. Ethiopian is not permitted to carry domestic traffic between the two Malawi ports. 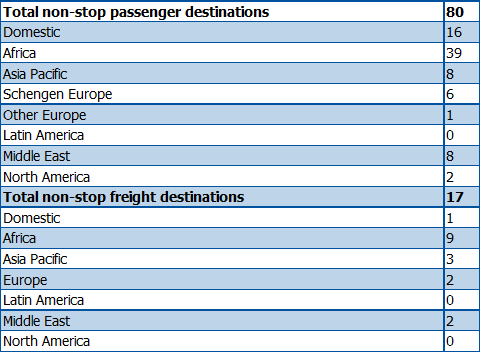 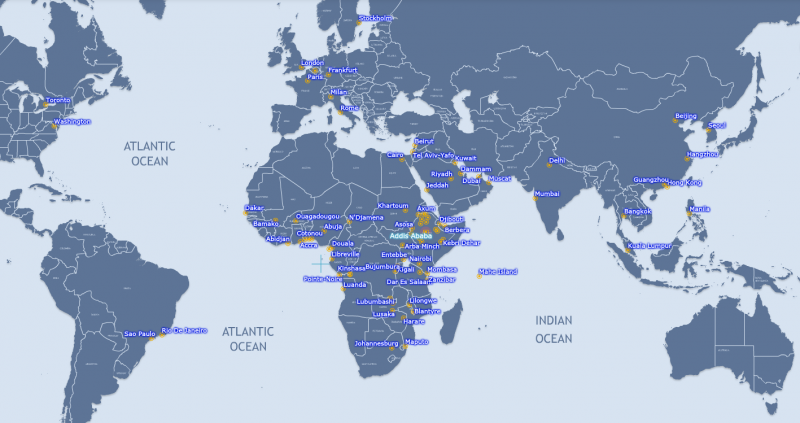 Ndola is also being served three times weekly with a Boeing 737-700. It became on 31-Mar-2013 Ethiopian's second destination in Zambia after Lusaka.

Seemingly ironically, given the growing competition for African hub operations that Emirates is providing, Ethiopian’s biggest route by some margin is Addis Ababa-Dubai. Its biggest African international route is Addis Ababa-Johannesburg. 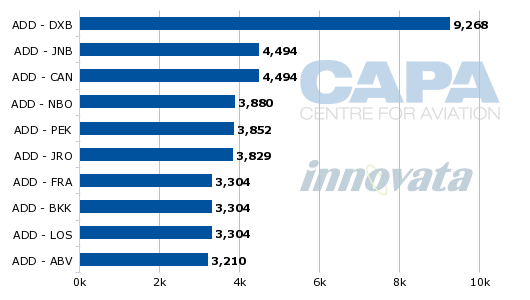 The existing 787-8s have been in storage since the global fleet was grounded in Jan-2013 and Ethiopian has cancelled services for the aircraft until mid-Jun-2013. The carrier operated its 787s to Dubai, Frankfurt, Toronto and Mumbai.

Ethiopian was in Feb-2013 selected by Malawi's Public Private Partnership Commission as the preferred bidder to become a strategic partner of failed state-owned national carrier Air Malawi. If negotiations are successful Ethiopian Airlines could acquire a stake of up to 49% in the privatised airline with Malawi's Government holding a 20% share and the remainder being offered to private investors in Malawi.

Ethiopian could look to establish a Southern African regional hub at either Blantyre or Lilongwe as part of its long term multi-hub strategy in Africa. The carrier in 2008 established Lome, Togo based regional subsidiary ASKY. The carrier has been operating throughout Western Africa since 2010 and codeshares extensively on its parent’s network. Ethiopian plans similar operations in Southern and Central Africa.

Land-locked Malawi is one of the world’s most densely populated and least developed countries. Air Malawi was placed in voluntary liquidation by the government in Nov-2012 after two failed restructuring projects and reportedly USD50 million of debt. The airline’s assets have been transferred to a new company under the same name, and the carrier continues to operate while the government, through the Privatisation Commission, seeks to complete an equity partnership deal to recapitalise the airline.

Air Malawi operates limited services on a network of five domestic and regional routes, including Lilongwe, Johannesburg, Harare and Lusaka. The carrier’s apparently profitable subsidiaries Air Cargo, which operates airfreight services between Malawi, Europe and the Far East, and Lilongwe Handling Company, will be separated from the privatised company and are not included in the equity sale.

Two previous attempts to privatise the carrier failed. A partnership including SAA tried to buy the carrier in 2003 followed by South Africa’s Comair in 2007.

Ethiopian Asian expansion to include Vietnam, South Korea and the Philippines

Ethiopian Airlines plans to expand its Asian network with the addition of Ho Chi Minh City, Manila and Seoul Incheon from 18-Jun-2013. Hong Kong will also become a direct route from Addis Ababa, rather than operating via Bangkok. .

Ethiopian intends to operate Ho Chi Minh, Manila and Seoul Incheon via its two existing Asian hubs, Hong Kong and Bangkok. Seoul and Manila will be an extension of the new direct Addis Ababa-Hong Kong route and Ho Chi Minh is added to the Addis Ababa-Bangkok service. Recently added Kuala Lumpur via Bangkok will be expanded with a fourth frequency from 24-Jun-2013.

Ho Chi Minh and Manila will be served three times weekly, while Seoul will have four weekly frequencies. All routes will be operated using Boeing 767-300ER aircraft. 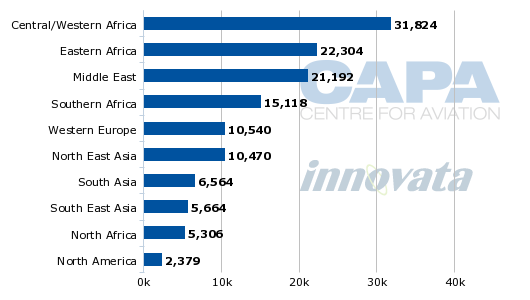 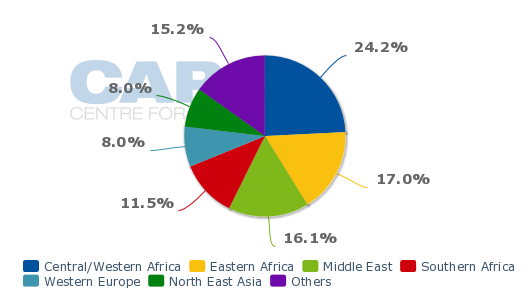 China-Africa is one of the world’s fastest growing markets, albeit off a small base, and Ethiopian’s Addis Ababa hub is well positioned to exploit this growth as Ethiopian offers fast connections throughout Africa from its four Chinese destinations.

In addition to Guangzhou and Hong Kong, Ethiopian serves Hangzhou four times per week with 767-300ERs via New Delhi. Ethiopian also operates direct from Addis Ababa to Beijing, a route which was upgraded in May-2011 from a one-stop 767-300ER service via New Delhi to a non-stop service with 777-200LRs.

Ethiopian currently operates daily to Bangkok with four weekly flights going on to Hong Kong and the other three to Kuala Lumpur. When Hong Kong becomes a direct daily service from 18-Jun-2013, Kuala Lumpur will increase to four times weekly and three weekly flights to Ho Chi Minh will be added. 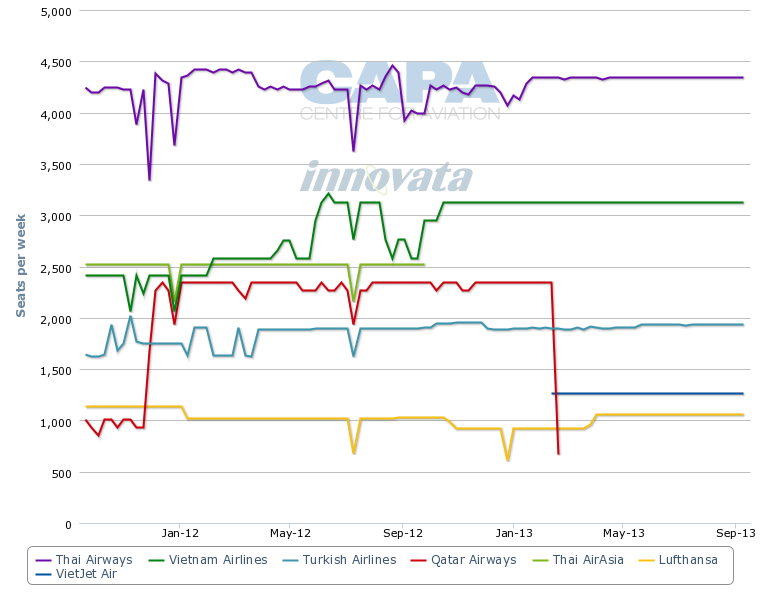 As with all Asian destinations, Ethiopian’s new routes are targeted at expanding development and investment opportunities from South Korea, Vietnam and the Philippines to grow its Addis Ababa hub.

Bilateral trade between Vietnam and Africa more than doubled between almost USD4.8 billion between 2009 and 2011 in part due to Vietnamese investment in African energy and mining projects. The Philippines is a promising work in progress. Currently the country’s trade is largely limited to South Africa but this is likely to expand into other markets as demand for its consumer electronics increases among Africa’s growing middle classes.

The 767-300ER is not able to operate from Addis Ababa, a high altitude airport, to Rio de Janeiro direct. But the stopover at ASKY’s Lome hub does provide Ethiopian with the opportunity to serve Western Africa without the need for lengthy back-tracking from Addis Ababa. ASKY and Ethiopian plan to extend their codeshare to include the route.

Ethiopian will have the potential for considerable transfer traffic along the full length of the South American-Asia route. Traffic on the route has traditionally transferred via hubs in North America and Europe, but these are coming under increasing pressure from the Middle Eastern hub carriers.

Well placed African hubs in the Northern half of Africa like Addis Ababa, Nairobi, Lome and Algiers should be ideally positioned to capitalise on future growth in trade between the three regions – relying on healthy and aggressive locally based airlines to drive the growth.

Ethiopian’s strategy of developing its network in Asia, expanding its African coverage with the potential for a second regional hub through the strategic partnership with Air Malawi and linking both continents to Latin America should give the carrier a competitive edge against neighbouring Kenya Airways and strengthen the Addis Ababa hub. Membership in the Star Alliance offers a mixed blessing, as several other members compete directly with it on key longhaul routes; but the alliance’s support within Africa delivers mutual benefits for Ethiopian and other members.

One inhibitor on hub expansion is Ethiopian’s protectionist government policy which strictly limits foreign carrier access to Addis Ababa, especially those from Gulf states which are rapidly expanding their presence across African. Although this policy has undoubtedly helped the flag carrier deliver a strong profit record in the past, keeping other airlines out will stand in the way of the hub airport achieving its true potential.