Ethiopian Airlines is building up its West African operation, through expansion at the Togo-based affiliate ASKY and new long haul services from Lome to New York and São Paulo. ASKY is adding capacity to several of its 19 destinations as it takes delivery of two 737-800s, which will be the largest aircraft in its fleet.

ASKY commenced operations in 2010, with Ethiopian as a strategic partner. Ethiopian has a 40% stake in ASKY and all of ASKY’s aircraft are registered in Ethiopia. ASKY launched with 118-seat two-class 737-700s and added all four of its Q400s – which are in two-class 71-seat configuration – in late 2012 and 2013.

The Ethiopian CEO, Tewolde Gebrermariam, told CAPA on the sidelines of the 1-Jun-2016 IATA Annual General Meeting in Dublin that two 737-800s would be added to ASKY’s fleet by the end of 2016. The first 737-800, which was delivered in early-Jun-2016 in 164-seat two-class configuration, is being used for growth ahead of Ethiopian’s launch of services between Lome and Newark.

The 737-800s represents significant expansion for ASKY as the capacity of its fleet increases by 40%, from 638 total seats to 895 total seats. ASKY is adding capacity to several of its existing destinations through a combination of additional frequencies and upgauging existing frequencies.

Abidjan and Dakar are among the ASKY destinations that will connect with Ethiopian’s new thrice weekly Lome-New York service. Ethiopian is also selling one-stop connections from New York to Bamako, Bissau, Brazzaville, Conakry, Douala, Kinshasa, Lagos, Libreville, N'Djamena, Niamey, Ouagadougou and Yaoundé. ASKY has introduced a new schedule on several routes to facilitate connections to and from Newark.

Mr GebreMariam estimated that West Africa will account for 60% of passengers on the new Lome-Newark service, with East Africa accounting for the remaining 40%. As Togo-US is a very small market almost all of the West Africa passengers will connect beyond Lome, with Ghana and Nigeria expected to be particularly strong markets. Mr Gebrermariam said that Ethiopian expects strong point of sale results from both West Africa and the US, pointing out that there is a large West African community in the New York area.

West Africa is an underserved market from New York and the US generally – forcing most passengers to fly via Europe. Ethiopian is confident that the new route will succeed as it will provide a new faster – and in many cases a more affordable – option for passengers heading between New York and several West African countries.

There are currently only 33 weekly nonstop flights from the US and West Africa, including 14 frequencies from Delta Air Lines, seven from United Airlines, seven from South African Airways (SAA), three from Nigeria’s Arik Air and two from Cape Verde’s TACV.

Arik operates three weekly flights from Lagos to New York JFK and TACV operates two weekly flights from its Praia base to Providence in Rhode Island, a niche ethnic route catering to local point-to-point demand. SAA operates four weekly Accra-Washington Dulles and three weekly Dakar-Washington Dulles flights, all of which originate in Johannesburg. SAA is looking at a potential new fifth freedom route from Nigeria to New York, which could pose new competition for Ethiopian.

Delta operates daily Atlanta-Lagos services, four weekly flights from New York JFK to Accra, and three weekly flights from New York JFK to Dakar. United currently has a daily flight from Houston to Lagos but is dropping the service, its only African route, on 30-Jun-2016. This leaves a void in the US-West Africa market which will partially be filled with Ethiopian’s new service to Newark. 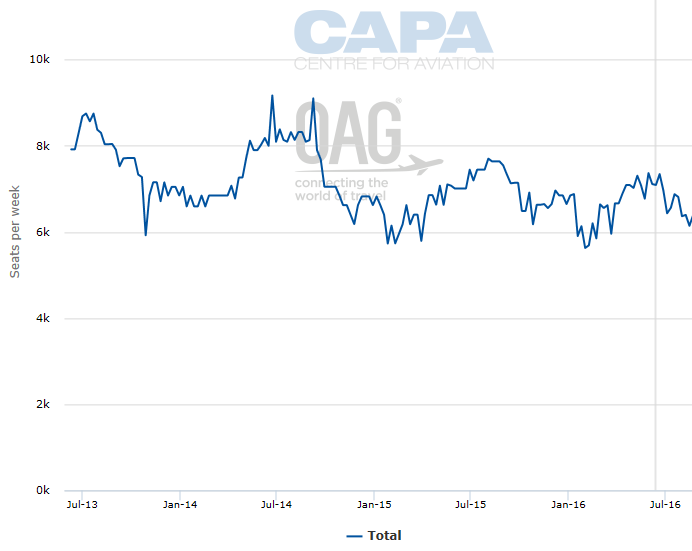 Ethiopian initially aimed to serve New York JFK but Mr GebreMariam said the airline was unable to secure slots at JFK. He said Ethiopian could later move the Togo-Newark flight to JFK or potentially launch JFK to supplement Newark. He said that JFK is generally the preferred, or more convenient, airport for New York’s West African community.

All three of the Lome-Newark frequencies will originate in Addis Ababa and be operated with 270-seat two class 787-8s. Ethiopian also uses the 787-8 to operate three weekly flights on an Addis Ababa-Lome-São Paulo routing.

ASKY traffic to increase as Ethiopian expands the Lome hub

Ethiopian’s Lome-São Paulo and São Paulo-Lome flights will have identical arrival and departure times in Lome as the Newark flights. The São Paulo flight departs Lome at 1305 on Monday, Wednesday and Saturday and lands back in Lome at 1130 on Tuesday, Thursday and Sunday. The Newark flight will depart Lome at 1300 on Tuesday, Thursday and Sunday and land back at Lome at 1130 on Wednesday, Friday and Monday. The schedule therefore provides the same regional connections to Brazil as for US passengers, but on different days of the week.

ASKY’s new schedule, introduced on 21-May-2016 as the São Paulo flights resumed, facilitates quick connections for both São Paulo and Newark. In some cases the new schedule also reduces transit times for travel within West Africa and for connecting passengers flying into West Africa on Ethiopian from East Africa and Asia.

Transit traffic has always accounted for a majority of ASKY’s traffic in Lome, as Togo is a small local market. Historically, a large share of this traffic has been travelling within West Africa. ASKY will continue to grow its share of the local West African market as its overall capacity increases but the new Brazil and US connections will be the biggest driver of traffic growth.

The Newark flight alone should generate more than 700 incremental passengers per week for ASKY, based on Ethiopian’s expectation for West Africa transfers and an average load factor of 75% on Lome-Newark. This is significant when considering that ASKY currently has approximately 12,000 weekly seats in the Lome market. Lome accounts for approximately 60% of ASKY’s total seat capacity. 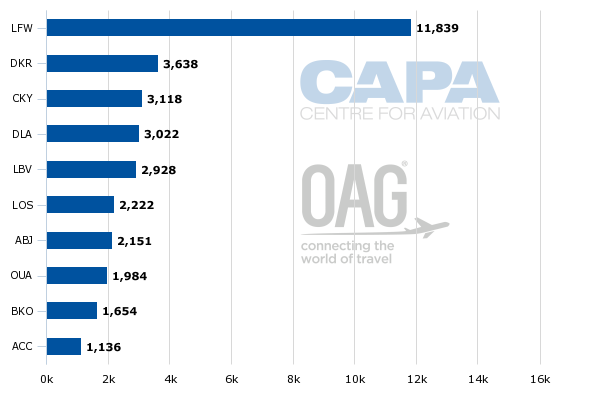 ASKY also operates fifth freedom routes from 11 other destinations. Most of these destinations are larger local markets than Togo but the biggest near-term opportunities for growth are in Togo, due to the expansion by Ethiopian in Lome.

ASKY currently serves 19 destinations (including Lome) across 16 West African countries (including Togo). Ethiopian has used ASKY and Lome Airport in Togo as its hub for West Africa since ASKY launched in early 2010. 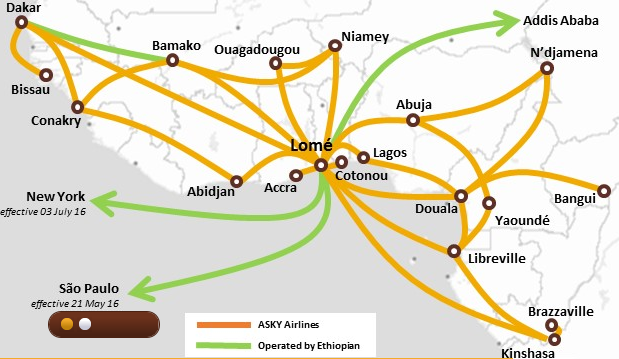 ASKY and Ethiopian combined currently account for almost 80% of total seat capacity at Lome Airport. Their share of the Lome market will expand even further as both airlines add capacity at Lome in the coming months. Lome currently only has regular services from five other airlines. 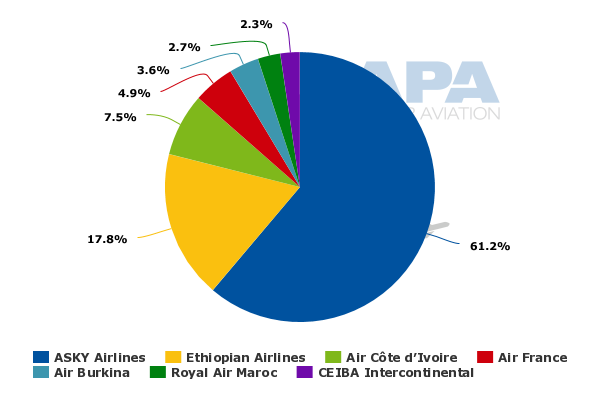 Lome Airport recently opened a new terminal with capacity for 2.5 million annual passengers. The new terminal and a planned new airport that could open next decade are part of an initiative by the Togolese government to position Lome as a hub for Africa and beyond.

The current regional expansion could finally be a springboard to launching new routes outside West Africa – Johannesburg is under consideration – and potentially outside Africa. ASKY now has the regional network – needed to feed any new medium or long haul services – to take a stab at intercontinental flights. However, such expansion will face challenges, and could prove risky.

The Ethiopian-ASKY partnership has been highly successful, with Ethiopian using ASKY to feed its Lome flights and some of its other West African services. ASKY is now profitable, and Ethiopian in recent years has been by far the most profitable airline in Africa.

Ethiopian currently has its own services to 16 of AKY’s 19 destinations; Bangui, Bissau and Conakry are ASKY’s only exclusive destinations. However, ASKY’s role in the 16 overlapping destinations is significant as it has enabled Ethiopian to provide greater frequency and more options for its passengers originating in East Africa and Asia.

Ethiopian’s investment in ASKY and its other African affiliate, Malawian, is key to the airline’s objective to continue growing its presence in Africa. Ethiopian already has the largest African network, with 47 regional international destinations – or 50, when ASKY’s three exclusive destinations are included – along with 17 domestic connections (based on OAG data for the week commencing 13-Jun-2016).

The African network has been critical in enabling Ethiopian’s rapid growth over the last several years, particularly in Asia. Ethiopian currently operates passenger services to 11 destinations in Asia, six of which have been launched since 2011. The Asian network, which is expected to grow to 15 destinations over the next year, relies heavily on connections beyond Ethiopia – including to West Africa.

Ethiopian now needs the Lome hub to support Newark and São Paulo, neither of which would likely be viable routes without the stop in Togo and significant feed from West Africa. Ethiopian is keen to grow further in the Americas – with Chicago and Houston the most likely next new destinations – but there is insufficient demand to support new nonstop services from Addis Ababa.

Ethiopian could route its future US routes via Lome or Dublin and is looking at both options. However, with Togo Ethiopian has the opportunity to carry passengers from several West African countries and meet its overall strategic goal of building up the group’s Lome hub while expanding its leading pan-African presence.