Emirates has multiple reasons for cutting back on US capacity

As the most conspicuous and largest, Emirates Airline often takes on its shoulders the increasingly difficult task of defending Gulf aviation. Emirates often single handedly represents the Gulf and "Middle East Big 3", in much the same way as Dubai carries regional geopolitics.

Just as there are significant differences between the Big 3 US airlines who have strenuously opposed the Gulf carriers in the US market, so Emirates is fundamentally different from its peers: it is longer established, has a larger home market and has had a more commercial mandate from the beginning.

Yet Emirates must compete in a market where many others would like a piece of that market. Just as Dubai Inc modelled itself in many ways on Singapore Inc, there are many who would follow the same trail. This does not lead to steady market conditions.

Certainly the policies of US President Trump have hurt aviation and tourism. But Emirates' announcement of a 19% reduction in services to the United States is less about US policies and more about the nature of the market forces that started before Trump was even a serious Presidential contender.

There is little doubt that Emirates (and others) accelerated expansion into the US for fear of the threatened imminent clamp down on growth sought by the US Big 3. But there is much more to the story.

Any comment from Emirates about overcapacity will be seized on by opponents. In response to Emirates' announcement about US service reductions, the Partnership for Open & Fair Skies stated: "The fact is, market demand has never played a role when the Gulf carriers decide where to fly. It is well known that the Gulf carriers, including Emirates, lose money on most of their flights to the United States and are propped up by billions of dollars in government cash...That Emirates would refer to itself as 'profit oriented' is simply laughable". These comments are loose with the truth, but are attractive to many who have an interest in quelling competition from this quarter.

Despite the lack of competition, networks are integrated, and destinations cannot always be solely evaluated on their own: Fort Lauderdale and Orlando are hubs for Emirates' partner JetBlue. Traffic connecting at those points may now connect at JetBlue's home hub of New York JFK. (Emirates is not reducing its presence across New York City – perhaps surprising given the overcapacity situation that is understood to exist.) Likewise Seattle is a hub for Emirates' partner Alaska Airlines. Etihad and Qatar may not fly to Seattle, for example, but can access connections on American Airlines and other airlines.

Recent load factor information is not yet available for the routes and Emirates says the cuts are being made as forward bookings showed weakened load factors. There was no comment about yields.

Emirates is now back to Nov-2016 size, Qatar narrows the gap

The reduction seems significant but needs to be placed in perspective. While Emirates is cutting flights, some flights were only recently introduced (the second Los Angeles service in Jul-2016) and there have been other recent additions that will remain (Newark in Mar-2017). The sum of the changes means that from Jul-2017 Emirates in the US will be back to its size at Nov-2016. This could represent a year of "lost growth", but after a decade of continuous expansion – even through the global financial crisis and 2011/2012 slowdown – the cyclical nature of aviation (or at least, competition) becomes inevitable.

From 2015, Qatar Airways has had approximately six fewer daily North American flights than Emirates. Even as Qatar grew, so too did Emirates, and Emirates retained a strong lead.

But with Emirates' reductions, Qatar will now have only three fewer daily flights. (The capacity gap is wider owing to Emirates' larger aircraft.) This smaller difference could mean that Qatar will be content to let the market absorb growth, rather than the airline adding more flights. 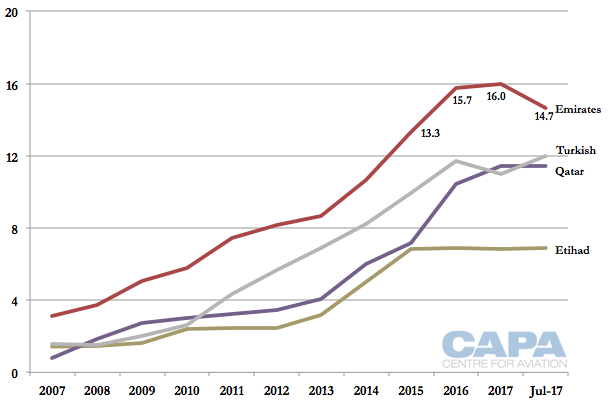 The collective presence of the three Gulf network airlines in North America is not substantially changed: they averaged 33 daily flights in 2016 and from Jul-2017 will have 33 flights again. Including Turkish Airlines, sometimes described as the "fourth Gulf carrier", they will have 45 daily flights. 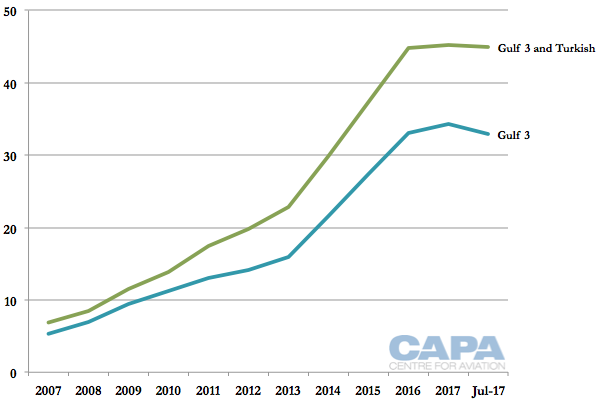 Emirates has stated that it has seen "a significant deterioration in the booking profiles" across all travel segments on all US routes over the last three months. The airline stated: "This is a commercial decision in response to weakened travel demand to US. The recent actions taken by the US government relating to the issuance of entry visas, heightened security vetting, and restrictions on electronic devices in aircraft cabins have had a direct impact on consumer interest and demand for air travel into the US". Emirates added: "We will closely monitor the situation with the view to reinstate and grow our US flight operations as soon as viable".

A US Presidential Executive Order restricted travel to the US from certain countries – mostly Muslim and many significant connecting markets for Gulf airlines. A revised US security policy prohibited passengers carrying electronic devices larger than a mobile phone in the cabin. This ban was for eight airports mostly around the Middle East and North Africa, and it includes the major hubs of Abu Dhabi, Doha, Dubai and Istanbul.

It is a good talking point to blame unhelpful policies for a 19% cut in capacity and reduction in visitors and economic benefit to the US. The service reduction could add pressure on the policies. Blaming a capacity cut on overcapacity will not receive the same attention.

The US policies introduced in recent months have undoubtedly come with a cost, including to all of aviation and tourism. Of that there can be no doubt.

But the policies alone cannot be the sole, or even major, reason to cut flights 19%. In 2016 there was a change in demand and capacity affecting Emirates. Emirates has made indulged in a little over-exuberance, including a second daily Los Angeles service that has been a costly failure. But there are significant external factors.

Demand: existing demand has been challenged, even before the needed growth to match the expansion of supply is considered. The fall in fuel prices hurt the energy sector and related companies, which are strong in Dubai. Approximately 20-30% of Emirates' traffic is O&D. While Emirates and others are known for discounted connecting fares, their O&D fares can be very high yielding, in part because they dominate their hubs.

In an 11 month period from Nov-2015 to Sep-2016, Qatar Airways grew its North American presence by 60% in terms of frequencies and 66% for seat capacity. From 2015 to Jul-2017, Emirates will have added 1.3 daily flights in North America (reflecting announced reductions), Etihad no flights, Turkish 2.1 flights, and Qatar 4.3 flights.

It may be argued that some of Qatar's growth was catch-up, and that it should have grown earlier. But Qatar now has a very large presence in North America relative to its beyond markets: in North America, Qatar Airways will have 57% as many seats as Emirates but in the important India market, Qatar is 39% the size of Emirates. In short, Qatar must work harder in beyond markets to sustain volume and yields to/from North America.

India is strengthening: This is another influencing factor, given the market's significance in the US. India is the largest single source for Emirates and other Gulf airlines (Turkish remains heavily limited). Their success in India has been because of their own commercial strength, network and product. Gulf and other intermediate airlines - including those such as Lufthansa and Singapore Airlines - have benefited in the Indian transfer market from the deficiencies of local Indian carriers. (As CAPA has noted before, these shortcomings are the direct result of India's misguided "protection" of its airlines.)

Air India is however showing signs of improvement and is also growing in North America, challenging the Gulf airlines' networks. Its membership in Star Alliance makes it more attractive to some passengers than before.

There is more competition to come: there are rumours of American Airlines and Delta re-evaluating nonstop India-US flights. India's Singapore Airlines JV, Vistara, is also expected to go long haul.

Kuwait Airways, Saudia, PIA and more: The revitalisation of Kuwait Airways, Saudia and Pakistan International Airlines adds challenges in other key Emirates source markets. Even if the growth of those airlines in North America is small, product and service changes improve their existing positioning.

Oman Air does not serve North America (although it has codeshare access) but its growth in non North American markets has an indirect impact as traffic flows change. The same is true of general growth from Kuwait Airways, Saudia, PIA etc. Gulf network airlines have such integrated connecting flows that a change in one market can have impacts across the network. The impacts can be small, but add up.

This combination of factors produces an outcome with challenged demand but far more capacity. There have certainly been lost bookings from the new US travel related policies. But bookings have also gone away as a result of pressures on the oil sector and general business. Other bookings have gone to competitors, since Emirates is reluctant to match lower yields.

Since the fall of fuel prices airlines have generally lowered yields to maintain or improve load factors. Consequently, airlines have come under pressure – from banks, from the public, from government – about falling revenue.

Yields and load factors remain, as always, a delicate balance. There are signs that airlines are willing to reduce load factors (which, if above the high 70s, generally do not receive much attention) in order to soften the yield fall, or even try to recover it.

The reduction of four daily flights frees up significant capacity, since a daily ultra long haul flight requires the commitment of 1.5-2 aircraft. These are expensive assets. In a statement Emirates said that it would seek new markets for those aircraft: “Emirates has therefore responded as any profit-oriented enterprise would, and we will redeploy capacity to serve demand on other routes on our global network.”

But Emirates will be challenged to redeploy the capacity, and that adds to existing excess frames. Emirates is already accelerating the retirement of older aircraft. The result will surely be the parking of some aircraft and reduced utilisation of others.

In May-2017 Emirates is due to report its financials for the year to 31-Mar-2017. In recent years Etihad has reported unaudited financials anywhere between March and May (it has not yet disclosed 2016 figures). Qatar Airways released its first annual report in Jun-2016, for the year ending 31-Mar-2016.

For 1H2016 (the six months to 30-Sep-2016) Emirates reported a 75% profit drop in airline profit to AED786 million (USD214 million). There have been further challenges since then, but Emirates President Tim Clark told Bloomberg on 20-Apr-2017 that Emirates would report an annual profit.

Although Emirates is thought of as the new challenger, it is well into its fourth decade. With the onset of adulthood, this is the time to settle down and make plans for the future.

Emirates is restructuring: its cost structure now has considerable fat to be trimmed; it needs greater agility in its network and is evaluating medium sized widebodies; it needs integration with its sister short haul airline flydubai; and finally, there needs to be a plan to carry its constrained Dubai hub (slots are largely full, per the graph below) for a number of years until it relocates to Dubai World Central. 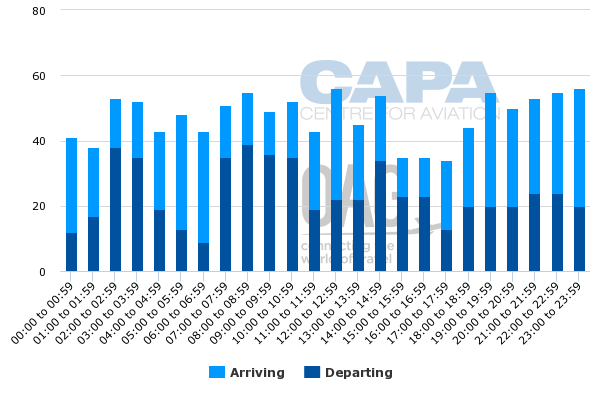 This is not a small or easy target list. But with the history of what Emirates has achieved, it has shown it can refine itself.

That would suggest that, if the Emirates of today is a worry to airlines, the future Emirates – smarter, leaner, bigger and cheaper – will definitely require other airlines to undertake their own changes.