The shape of Embraer’s response to the Bombardier CSeries and the possible re-engining of the B737/A320 will likely be known by the end of the year, according to the new Executive VP of its new division - New Programs, Airline Market - Mauro Kern.

Mr Kern, speaking to AINonline confirmed that Embraer is now turning its attention back to the commercial aircraft market, after its early success in the very light jet and business jets arena. The company is now considering what shape its new aircraft programme will take, with the new unit due to undergo heavy growth as plans develop.

Embraer has already let it be known that it is considering a larger aircraft, potentially 150 seats, based on its already successful E195 platform. But it could also develop a new jet aircraft or even a large turboprop, although the company’s interest in turboprops has “lessened” in favour of the 110-120 seat jet market.

The direction the company takes with the new programme will shape Embraer’s future. If it does decide to move beyond its current 70-120 seat regional jet range into larger aircraft, this will bring it into direct competition with Airbus and Boeing for the first time, as well as offering an alternative to Bombardier’s new CSeries.

The current four-aircraft E-Jet family has been one of the most successful regional jet aircraft programmes in history, with close to 900 aircraft ordered since the programme debuted in 1999. Of these, over 600 have been delivered, transforming Embraer in the process and turning it into the world’s fourth largest aircraft manufacturer. In 2000, the company’s annual revenue was USD2.8 billion, in 2008 it was USD6.3 billion, before falling to 5.5 billion in 2009, with the downturn in regional jet and business aircraft ordering.

Recent CSeries ordering may be the spur that Embraer needs move into new territory, but the manufacturer has previously expressed its reluctance to move into Airbus’ and Boeing’s competitive space, and the threat of new engines on their existing narrowbody families may also blunt its enthusiasm.

The OECD’s decision on aircraft funding rules, to be made before the end of the year, will also certainly have an effect on Embraer’s direction. Regional jets had previously enjoyed some advantageous funding and financing terms. If these are removed, and there is a level playing field for all aircraft types, a smaller regional jet may not be an attractive option for the company.

In trading on Wednesday, Embraer was up 0.8%, while Bombardier dropped 1.6%. Larger manufacturers Boeing and EADS (parent of Airbus) were down 0.4% and 1% respectively. 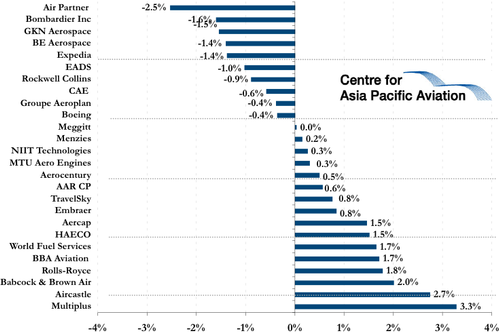