The global slowdown is still affecting Embraer, with quarterly revenue dropping 13.9% year-on-year to USD990.1 million as the manufacturer shifts production to a mix of regional jets and business aircraft, particularly the new very light jets.

Embraer delivered 41 aircraft in 1Q2010 but 19 of these were business jets. Commercial aircraft deliveries were down by better than half in the quarter, following the manufacturer’s production slowdown in 2008 and 2009. Embraer’s order backlog at the end of 1Q2010 was USD16 billion, down from USD19.7 billion at the end of 1Q2009.

The lower commercial aircraft output has also helped Embraer trim costs, which dropped approximately 15% in the quarter. However, the appreciating Brazillian real has made cost cutting more difficult. Embraer cut staff by approximately 20% in 2009. As of Mar-2010, the company employed 16,792 workers, not including its GMA and HEAI subsidiaries.

Elsewhere, Rolls-Royce CEO, John Rose, has produced a cautious forecast for the engine manufacturer for 2010, stating the company was still facing a challenging market environment. Some segments of the global economy are recovering and there is more market stability, but the overall outlook remains unchanged.

Rolls-Royce expects underlying revenue, underlying profits and average net cash balances to be broadly similar in 2010 to 2009, when the company earned a profit of GBP915 million.

With several important new aircraft projects pending, including the B787 and the A350 (accounting for close to 1,400 orders between them), Rolls-Royce has better expectations of long-term growth. Over the next decade, the company expects revenues to double as Boeing and Airbus increase their commercial aircraft output and other projects the company is involved in, such as its oil and gas, and maritime engine divisions. 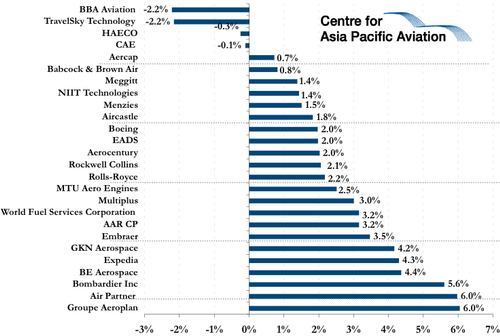