Economic downturn provides the right conditions for most LCCs: Germanwings

Germanwings CEO, Thomas Winkelmann, stated the economic downturn has provided the "right growing conditions" for most LCCs, adding that Germanwings is in a good position, making in-roads into the UK market. The carrier has not been financially pressured by over-ordering aircraft.

Mr Winkelmann also stated the LCC is in talks with Condor regarding a similar agreement to the carrier’s new booking partnership with bmibaby. Mr Winkelmann stated the main aim of teaming-up with other smaller European carriers is to “create new low cost ways of distributing tickets”, while avoiding the complexity of codeshare partnerships.

Also in Europe, shares in easyJet and Ryanair were down 3.8% and 4.6%, respectively.

SpiceJet’s shares gained 4% yesterday, upon the release of the carrier's 2QFY2010 financial results, with the carrier stating it expects to break even in the 12 months ending Mar-2010, if oil prices and rupee-dollar exchange rates remain stable. 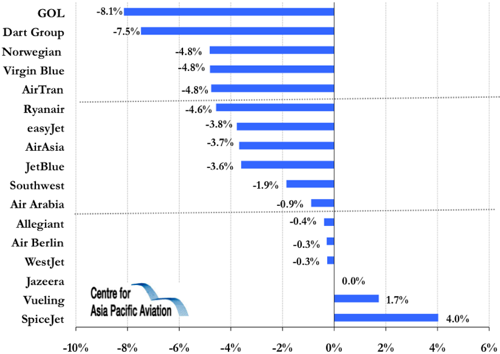