North and South American carriers’ stocks surged on Monday (01-Feb-2010), pushed by gains in the wider market. The Dow (+1.2%) ended trading higher on improved energy stocks, thanks to better than expected results from Exxon Mobil, while materials stocks were also on the rise, due to a lift in metals futures.

American Airlines (+7.2%) shares made the largest gain on Monday, after the European Commission (EC) confirmed it is assessing the effectiveness of proposed commitments received from the carrier, British Airways and Iberia to alleviate the EC's concerns regarding potential anticompetitive agreements (related to passenger transport on certain long-haul routes). See related report: British Airways and Iberia merger seeming more likely to analysts; Ryanair and SAS up

American is also still also in talks with Japan Airlines. JAL President, Masaru Onishi, stated during trading that discussions with an alliance partner are continuing, with the company's stance on the matter remaining “neutral”, but added that a decision on a partner will be made “as soon as possible”, reportedly by 15-Feb-2010. Delta Air Lines (+3.3%) also made gains, as did other US full service carriers, US Airways (5.5%), Continental (4.9%) and United (4.3%). See related report: JAL takes neutral stance on alliance issue. New Chairman: carrier to be rebuilt “swiftly”

Allegiant (+0.0%) meanwhile announced its Board of Directors have approved increased authority under its existing Common Stock repurchase programme. On 29-Jan-2010, the Board increased remaining authority under the program to USD25 million, effective 01-Jan-2010, an increase of USD14.6 million. Under the current Common Stock repurchase program, Allegiant spent USD24.4 million in open market transactions during 2009, repurchasing a total of 637,902 shares at an average price of USD38.26 per share.

For further highlights, including coverage of the Department of Transportation and Department of Homeland Security (DHS) budgets, please see today’s America Airline Daily, your one-stop shop for news, data and analysis from the dynamic North American, Caribbean and Latin American aviation markets. 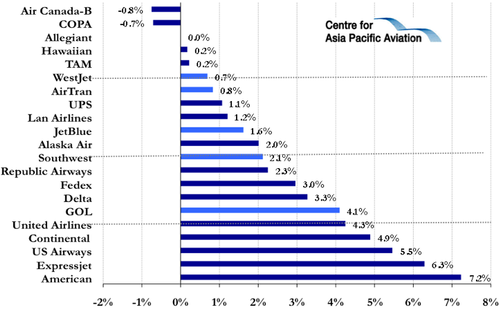