easyJet's FY2014 pre-tax profit increased by more than 50% to its highest ever level and its operating margin returned to double digits after more than a decade at less than 10%. Its pursuit of a more passenger-focused and business-serving LCC model has driven it to improve and innovate in terms of product, with features such as allocated seating and a user-friendly website now being copied by the likes of Ryanair.

This customer focus, together with what the company has called “a benign capacity environment”, as competitors were forced to reduce seat numbers, has led to impressive unit revenue growth, while management has not lost sight of cost control. Its confidence in the future was signalled by a dividend totalling GBP308 million.

Looking into FY2014, however, the outlook for unit revenues is less certain as capacity growth steps up a little, and profits are unlikely to grow as rapidly as they did in FY2013. Nevertheless, easyJet's business model remains robust and should deliver sustained healthy returns.

Pre-tax profit up 51% to its highest ever level

In FY2013 (year to Sep-2013), easyJet increased its profit before tax by 51% to GBP478 million, its highest ever result and towards the top end of the guidance range of GBP470 million to GBP480 million issued in Oct-2013. The result included an adverse impact from currency movements of GBP44 million, mainly from ex fuel costs.

Revenues increased by almost 11% to GBP4,258 million. The operating margin of 11.7% was a 3.1 ppt improvement on FY2012 and was the first time easyJet recorded a double digit margin since FY2002. This consolidates easyJet's position as Europe’s second most profitable airline by operating margin and takes it closer to the 14.4% achieved by Ryanair for the same 12 month period. easyjet’s return on capital employed (adjusted to include capitalised operating leases) increased from 11.3% in FY2012 to 17.4% in FY2013.

easyJet's balance sheet continues to be one of the strongest in the industry. Its gross cash balance (including money market deposits) increased from GBP883 million at the end of FY2012 to GBP1,237 million at the end of FY2014. This is equivalent to 106 days of revenues, a significant cushion against unexpected events. It gave easyJet GBP5.7 million of cash per aircraft, against its target of GBP4 million.

It had a net cash position of GBP558 million at the end of Sep-2013, compared with a net debt balance of GBP74 million a year earlier. Gearing (defined as net debt including capitalised operating leases as a percentage of total capital employed including operating leases) fell from 29% to 7%.

easyJet proposes to return GBP308 million of cash to shareholders, of which GBP133 million is in ordinary dividends (based on a one third pay out ratio) and GBP175 million in special dividends. The combined dividend yield is 6.2%, based on easyJet's closing share price on 18-Nov-2013. The dividend payments will bring its cash balance per aircraft down to just over its target of GBP4 million. 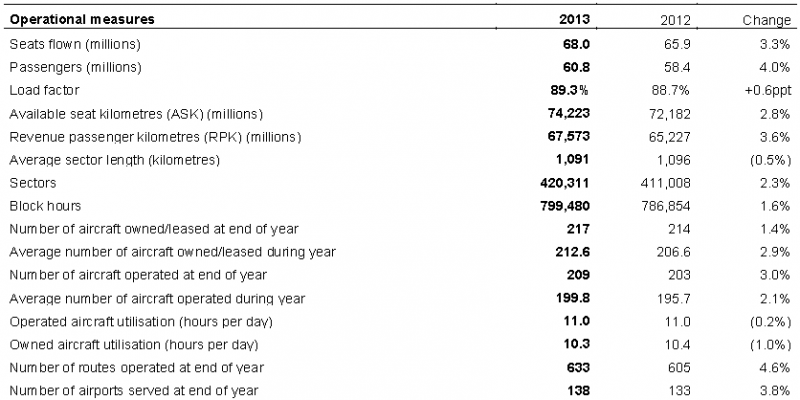 Revenue per seat increased by 7.0%, reflecting a benign pricing environment flowing from tight industry capacity conditions, the success of ancillary products such as allocated seating and easyJet’s focus on higher yielding business travellers. Total cost per seat (which includes finance costs in easyJet's reporting) increased by 3.5% and operational cost per seat by 3.4%.

easyJet growth in revenue per seat by quarter FY2013

easyJet comfortably beat its return on capital employed target of 12% in FY2013. It also increased the number of routes individually beating this target, while reducing the number that under-performed the target. Routes dropped included 14 from the airline's former base at Madrid.

Operating costs increased by 7%, ahead of capacity growth. easyJet's fuel bill increased by 3% to GPB1,182 million (28% of revenues). This increase was broadly in line with the growth in seat capacity. Although market prices for jet fuel fell slightly, the impact of easyJet's hedging programme was to keep its effective cost per metric tonne roughly flat.

Costs excluding fuel increased by almost 9%, faster than the increase in capacity. Cost per seat ex fuel was 5.3% higher than in FY2012, with 1.4% of this due to adverse currency movements. Airports and ground handling costs were a major contributor to the increase in cost per seat, reflecting fee increases in Spain and Italy and higher de-icing costs as a result of the harsh winter. Crew cost per seat also increased, albeit at a lower rate, as a result of salary increases, partly offset by a higher proportion of A320s in the fleet (more seats than the A319s).

Overhead costs grew faster than seat growth due to disruption-related costs such as compensation claims arising from winter weather-related delays and cancellations and an increase in employee performance-related pay. Brand licence cost per seat more than doubled as, under the agreement with brand owner Sir Stelios Haji-Ioannou, payments are now a fixed percentage of revenue and no longer capped.

easyJet CFO Chris Kennedy told analysts at the FY2013 results presentation that management action lowered cost per seat by GBP1.06, or 1.9%. The most significant impact on cost per seat from management action came from ‘easyJet Lean’, the airline’s cost reduction programme, which lowered costs in airports and ground handling, fuel and maintenance, and the increase in the proportion of larger aircraft. 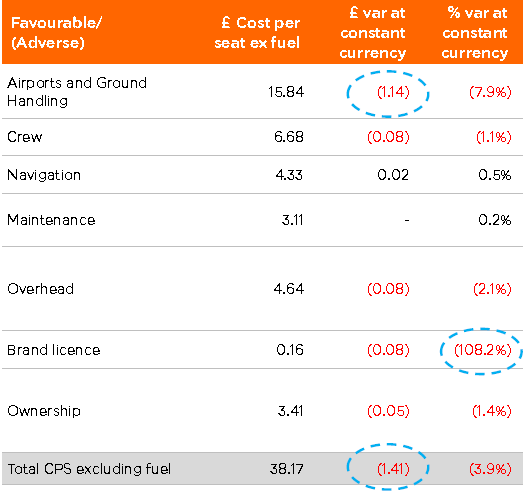 easyJet believes that it has the lowest cost base on the routes it flies. This is highlighted by its analysis of ex fuel CASK, split into two groups of cost. The first includes staff, depreciation, maintenance, aircraft ownership, marketing and head office costs and the second includes airport, ground handling and navigation charges. easyJet's analysis shows it to have the lowest ex fuel CASK in the first group of costs among European competitors.

The airline argues that the second group of costs is more open to interpretation of accounting standards (for example by netting off costs and revenues) and that this can distort comparison. 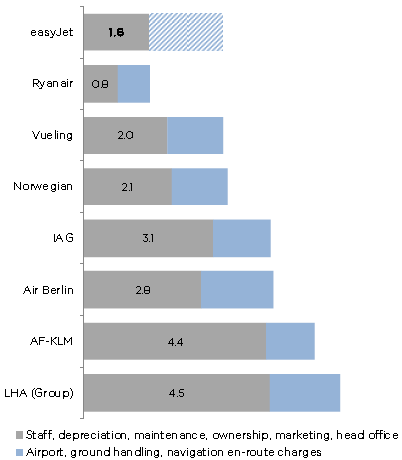 easyJet's fleet plan to FY2022 sees the number of aircraft increase to 282 in FY2022, slightly more than the 276 planned when the airline announced its most recent Airbus order in Jun-2013. The numbers are now higher by six aircraft for each year from FY2015 onwards and assume the exercise of six options. 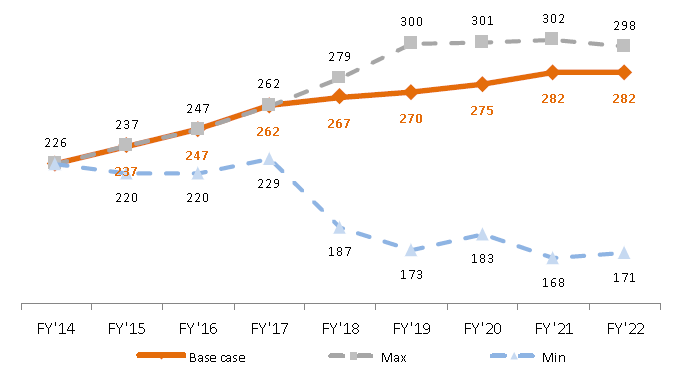 (7) Maximum, minimum and base fleet show the fleet position at the end of the relevant financial year. Base case reflects exercise of 6 options.
Source: easyJet

easyJet plans to grow seat capacity by around 3.5% year on year in 1HFY2014 (Oct to Mar). The carrier expects competitors to continue to cut capacity, but it will not all be easy for easyJet, according to Ms McCall: “We expect that industry capacity discipline will continue, although it will be less benign this winter than last winter”.

Whereas 1HFY2013 saw European short-haul market capacity fall by 4%, 1HFY2014 is expected to see market growth of 2%. On easyJet's markets, the outlook is better: competitor capacity is set to fall by 1%, although this is less than the 3% cut seen last winter. 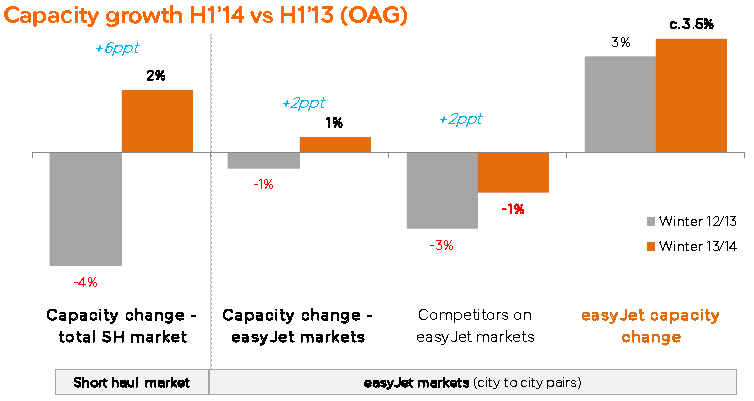 Competitor capacity cuts in 1HFY2014 are expected to be particularly deep in France, Italy and Switzerland, according to OAG data presented by easyJet. Competitor capacity will be flat in the UK and Germany and will grow in Spain (the only major market where easyJet will cut capacity). Restructuring by competitors such as Air France and Alitalia is providing easyJet with growth opportunities.

Apart from Spain, where it is reducing as a result of airport charges increases, easyJet will grow by between 2% and 4% in each of its major country markets in 1HFY2014. In the UK, although overall growth is planned at 4%, easyJet expects to grow by 17% in Manchester, 13% in Edinburgh and 6% in London. Spanish capacity cuts will focus on Madrid (-22%), while it plans to grow by 2% in the rest of Spain.

As outlined by Ms McCall at the 1HFY2013 results presentation, easyJet continues to see significant opportunity in taking market share from FSCs at its existing airports.

OAG planned seat growth for easyJet and competitors by country: 1HFY2014 versus 1HFY2013

The year has seen easyJet achieve considerable success in driving demand. In each of its major European country markets, more than 95% of passengers surveyed would consider flying easyJet again (source: Millward Brown and Gfk surveys for 12 months to end Sep-2013). easyJet says that the proportion of its customers re-booking was 55% in FY2013, up from 50% in FY2010. It also says that it is attracting an older customer base, implying higher disposable incomes, and is diversifying its customer base across Europe from its UK origins.

easyJet says that it has in excess of 10 million passengers travelling on business on a rolling 12 month basis and has increased its share of the business travel market by 4%. This reflects its focus on this market segment and the introduction of product features such as flexi fares, allocated seating, fast track security at selected airports and broadening its distribution channels to embrace the GDS and TMCs.

easyJet customers by country of origin: FY2010 and FY2013

FY2014 outlook: revenue per seat 'very slightly up' in 1H 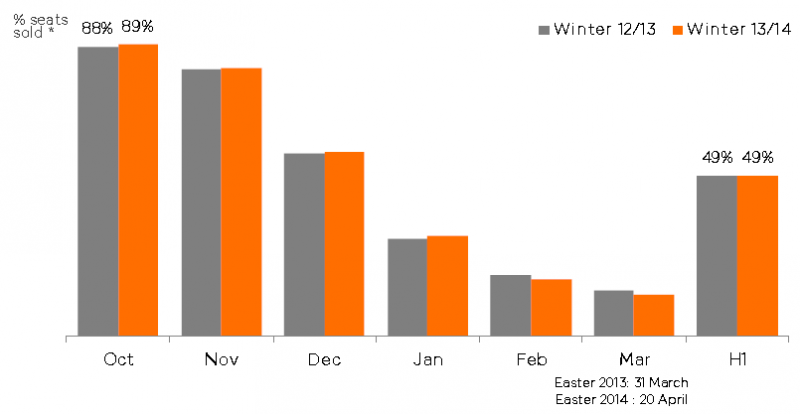 For FY2014 (year to Sep-2014), easyJet has not given a pre-tax profit target – that usually comes later in the year – but it says that forward bookings for 1H are in line with last year and has given guidance on a number of its P&L elements.

Key unknown is revenue per seat, but FY2014 profit growth set to slow down

The key unknown in easyJet’s guidance is the outlook for revenue per seat in 2H and FY2014. It is still benefiting from product improvements and attracting higher yield business passengers and these trends might be expected to support unit revenues. On the other hand, easyJet has enjoyed six successive years of growth in revenue per seat, growing from just over GBP40 to almost GBP63.

Against this backdrop, it is not surprising that this level may come under a little pressure, especially given some return to capacity growth in European short-haul markets (even if easyJet's markets will still see a small cut in competitor capacity). Moreover, with Ryanair aggressively pursuing a policy of price leadership and recently warning that its profits for the year to Mar-2014 will be lower than previously expected, easyJet can be forgiven for not committing to FY2014 guidance on revenue per seat at this stage.

Given the other elements of guidance, the current consensus forecast for pre-tax profit of roughly GBP540 million, growth of 13%, would require revenue per seat to increase by around 2% over the full year. Growth in revenue per seat of 0.5% for the year would lead to pre-tax profit level with the GBP478 million just reported for FY2013.

What seems certain at this stage is that easyJet's pre-tax profit growth in FY2014 will not match the very strong 51% growth seen in FY2013. Nevertheless, notwithstanding unexpected external events, there is no reason why it should not maintain, and even increase, its impressive return on capital.