Shares in easyJet slipped 0.9% yesterday. As the easyJet legal action continues in London, founder Sir Stelios Haji-Ioannou stated that if his dispute with the carrier is not resolved he may withdraw easyJet’s brand licence and offer it to another carrier. Sir Stelios has also suggested he could lease the name to a large online travel retailer, such as Expedia or Travelocity.

easyJet outgoing CEO, Andy Harrison, admitted the LCC has developed plans for a new name for the carrier but “only as a contingency plan”. Sir Stelios stated he is concerned easyJet’s expansion beyond its core activities could damage the interests of other businesses in the easyGroup.

While easyJet and Sir Stelios argue over what actually constitutes ancillary revenues (Sir Stelios has argued that easyJet's new charges for checking in baggage, which raised GBP238 million in 2009, are an ancillary business, while easyJet claims the baggage fees are as integral to its main business as fares), Ryanair announced it now offers a larger (20kg) checked-in bag allowance.

The new Ryanair allowance, priced at EUR/GBP25, is as an alternative to the standard (15kg) checked-in bag allowance of EUR15/GBP15. Passengers who require a second checked-in bag can also purchase an additional 15kg allowance for EUR/GBP35. Shares in Ryanair remained stable yesterday. 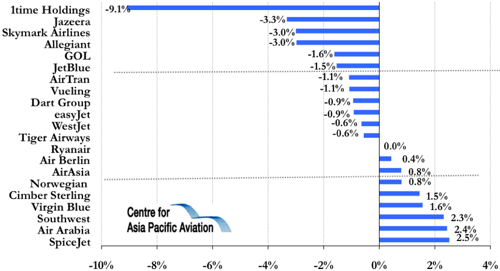