In spite of challenging market conditions and falling profits, easyJet remains on the offensive in its fight for market share with legacy airlines. It is also making contingency plans to apply for an EU AOC to ensure continued intra-European traffic rights in the post-Brexit future.

easyJet's revenue per seat, pre-tax profit and return on capital employed all fell in FY2016 (year to Sep-2016), the first reversal since before CEO Dame Carolyn McCall took the helm in FY2010. In spite of lower fuel prices, easyJet could not lower its cost per seat fast enough to offset the drop in unit revenue. Load factor was just above flat at 91.6%, so the drop in revenue per seat was all price-related. A series of external events put pressure on pricing – including terrorism, ATC strikes and the UK's Brexit vote.

Some airlines might tighten their capacity growth in the face of weak pricing, but easyJet plans to accelerate its seat growth from 6% in FY2016 to 9% in FY2017. It has its sights on an opportunity to take share from legacy airlines in airports where it already has a strong market position.

easyJet to apply for EU AOC in early 2017

easyJet has confirmed that it is in the process of establishing a new European Union-registered AOC. CEO Dame Carolyn McCall has also confirmed that easyJet's HQ will remain in the UK.

Although its preference would be for the UK to negotiate continued full internal access to the European single aviation market, it cannot control this process and there is some uncertainty about how this might turn out. The UK government plans to trigger Article 50 in Mar-2016, but the process of leaving the EU will then take two years, and negotiating its future relationship could take longer.

easyJet expressed confidence that its network would not be affected by Brexit. Its plan for an EU AOC was to secure intra-EU traffic rights in the event that its UK AOC could no longer operate on intra-EU routes post-Brexit.

It has conducted a review of where to locate the new airline and expects to make a formal AOC application in early 2017. It has not announced any further details of the holding structure for the operation, which would need to retain EU ownership and control.

As illustrated in a previous CAPA report, easyJet is potentially the most exposed airline to any loss of internal single European aviation market traffic rights (35% of easyJet's ASKs were on routes within the European Common Aviation Area/Switzerland in the year to the end of the summer 2016 schedule).

easyJet seat capacity growth to accelerate to 9% in FY2017

Regardless of the details of the post-Brexit world, easyJet is planning to accelerate its growth. It has identified the growth potential in its leading European markets by country for the period 2016 to 2021.

For most of these countries it expects compound average growth in passenger numbers of approximately 3% pa, varying from 2.4% pa in Italy to 3.8% pa in Switzerland (see chart below). 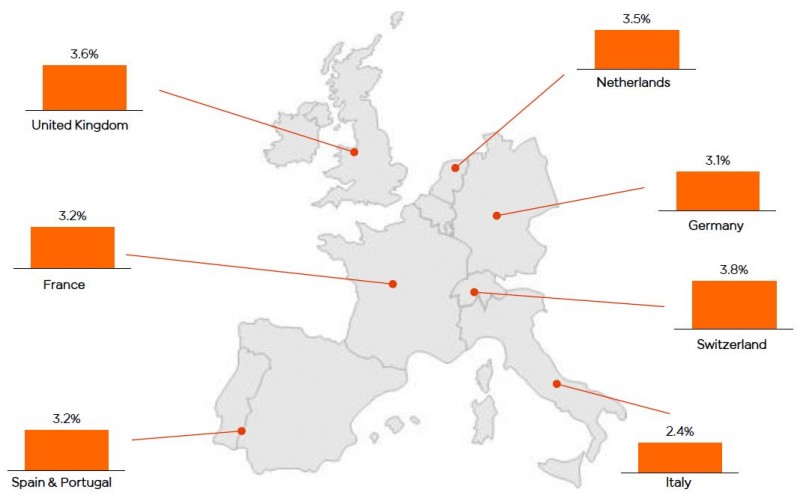 However, easyJet believes that it can achieve profitable growth considerably in excess of these rates. The airline plans 9% seat growth in FY2017 – a little higher than the 8% growth previously pencilled in – and envisages growth of up to 9% pa in subsequent years. This compares with 6% in FY2016 and 5% in each of the two years prior to that.

This growth plan is based on the strength of its network and the opportunity that it expects to use this to grow market share from higher-cost legacy airlines.

According to data presented by easyJet in its FY2016 annual results presentation, 98% of its seats in FY2016 touched an airport at which the airline is either number one (83% of its seats), or number two, by seat capacity (15%).

EasyJet seat capacity split by position at airport touched at either end of route: FY2016 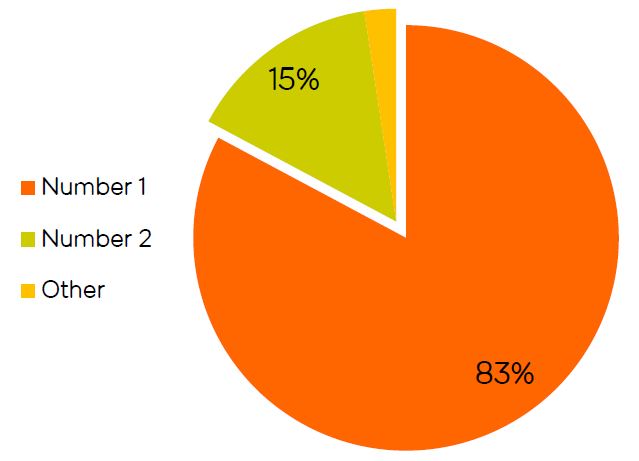 In FY2017 its 9% growth plan equates to an additional 7.1 million seats, of which 5.5 million (approximately 80%) will be on routes involving an airport where easyJet is number one, and 1.6 million seats in airports where it is number two. In other markets overall growth will be flat in FY2017.

easyJet has identified a significant market where point-to-point capacity is still controlled by airlines that are not low cost airlines.

According to easyJet more than one third of the seats at its top 20 airports are operated by non-LCCs on point-to-point routes. This market segment adds up to 77 million seats – slightly more than the capacity controlled by other LCCs at these airports.

Of the 77 million non-LCC point-to-point seats, 63 million are at airports where easyJet is the number one or number two airline. For easyJet the growth opportunity is in taking share from these non-LCC operators, rather than from the other LCCs in its top 20 airports.

Nevertheless, as CAPA has suggested previously, easyJet is also facing an increasing challenge from its lower cost rival Ryanair in primary airports.

See related report: easyJet: how the pricing model is being challenged as Ryanair moves into its territory

easyJet argues that capacity constraints in its airport network help to defend its position. Approximately 80% of its seats touch an airport that is slot-constrained during peak hours. Having a strong presence at such airports gives it access to additional slots when they become available. Moreover its fleet upgauging allows further growth, even without adding to its slot holdings. 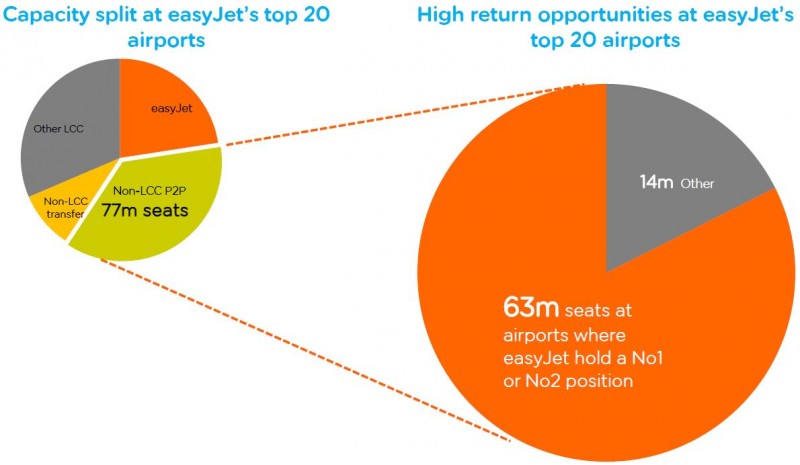 In addition, where it is number two behind a legacy airline it aims to take advantage of growth opportunities – for example, in France. Elsewhere easyJet will grow in specific catchment areas, such as Amsterdam, Venice and Berlin.

It will also invest in what it calls 'lean' (lower cost) bases – for example, Barcelona. These can offer 25% lower labour costs as a result of lower social charges and taxation. 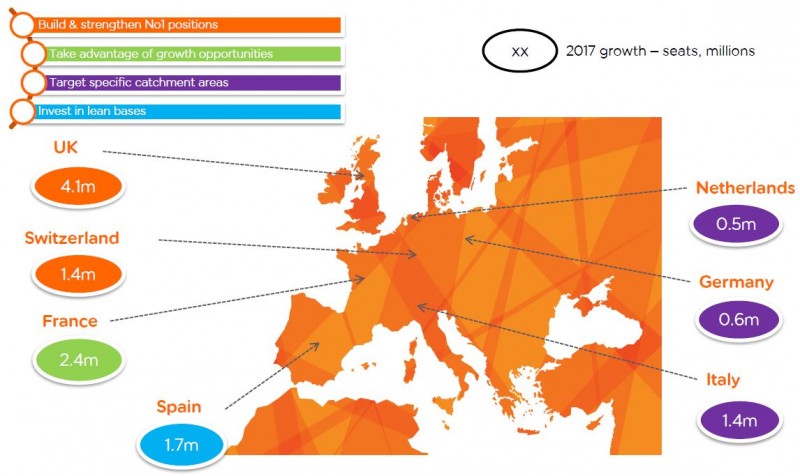 Increased capacity growth may add to pressure on unit revenue

As evidence of its ability to develop its route portfolio, easyJet cites the fact that 54% of its top 25% most profitable routes in FY2016 were not in its top 25% in FY2012.

Nevertheless, easyJet's acceleration of capacity growth is not without risk, particularly in the light of the current weak unit revenue environment.

In FY2016 easyJet estimated that the total European short haul market grew by 6%, and by 8% in easyJet's markets. The airline's own capacity growth was 7% – slightly slower than market growth in its markets.

In spite of growing a little more slowly than the market, easyJet suffered a 6% fall in revenue per seat in FY2016. Although lower fuel prices (net of hedging) allowed a reduction in cost per seat, this fell by only 2%.

As a result of easyJet's inability to cut cost per seat as quickly as revenue per seat it suffered a 28% fall in profit before tax: from GBP686 million in FY2015 to GBP495 million in FY2016.

This was the first decline in profit before tax that Dame Carolyn had presided over since becoming easyJet's CEO. 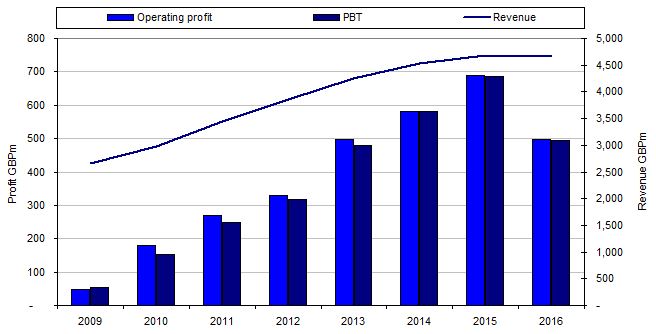 This ROCE level remained ahead of easyJet's hurdle rate of 12% (the minimum that it targets), and comfortably ahead of what it calculates to be its 7.9% weighted average cost of capital. 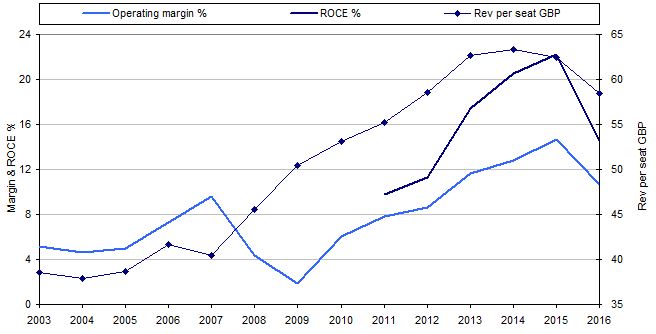 Revenue per seat weakened by "unprecedented external events" in FY2016…

Approximately one third of the revenue per seat decline in FY2016 (-6.4%, or -6.9% at constant currency) could be attributed to the immediate impact of terrorist events in Sharm El-Sheikh, Paris, Brussels Nice and Turkey, but capacity growth (partly stimulated by low fuel prices) was also a contributory factor.

Revenue per seat was further weakened by the negative demand impact of increased holiday costs for outbound UK consumers, resulting from the post-Brexit vote weakening of GBP and exacerbated by disruption due to weather, ATC strikes and airport issues also.

EasyJet estimates that the combined adverse impact on its profit before tax of what it called "unprecedented external events" was GBP150 million. It also suffered a net GBP88 million headwind from foreign exchange movements (mainly on costs), although it benefited by GBP160 million from lower fuel cost per seat.

Although the degree and relative significance of all these factors will vary, none of them is likely to disappear entirely in FY2017. Together with higher capacity growth by easyJet, 9% in FY2017 versus 6% in FY2016, unit revenue will remain under pressure.

Indeed, easyJet expects revenue per seat in 1H2017 to fall at a mid to high single-digit percentage rate, at constant currency. It fell by 7% in FY2016, so this guidance raises the prospect of a bigger drop in FY2107.

EasyJet could record another drop in profit in FY2017

Historically, easyJet has rarely experienced a fall in revenue per seat (see chart above). Since CEO Dame Carolyn McCall joined towards the end of FY2010 it has risen every year until last year, FY2015, and has now fallen in two successive years for the first time since it fell three years running from FY2002 to FY2004. In FY2002 easyJet's operating margin increased, but it then fell for three years.

Another fall in easyJet's profitability looks to be on the cards in FY2017, even if it continues to generate returns above its cost of capital. With signs gathering that Europe's airline sector may have passed a cyclical peak, the continent's second biggest low cost operator will be hoping that it weathers any downturn more successfully than Europe's legacy airlines.