EasyJet's 3Q update sent its share price up by 4% as investors cheered its better than expected revenue per seat performance, reflecting strength in the UK and on beach routes across Europe. Although this measure fell year on year - partly as a result of currency movements, but also illustrating some pricing weakness - the decline was less than expected. Moreover, the 4Q trend now appears to be positive.

Cost per seat, excluding currency movements, was slightly higher than expected, but this was the result of flight disruption caused by third parties, particularly French ATC strikes. Apart from this, there do not appear to be any cost surprises. One area of concern is easyJet's deteriorating on time performance statistics, although management insists that this is now improving.

Overall, and in spite of some challenges in the operational and macro environment, easyJet is in a relatively confident mood. Its FY2015 guidance sees pre-tax profit growth of around 10%, slower than the 21% achieved in FY2014, but still a solid performance.

As usual, easyJet's interim management statement for 3Q (it has a Sep year end, so 3Q is Apr-Jun) does not contain details of profits for the quarter, but it gives data on traffic, revenue per seat and cost per seat.

In spite of the slower than expected overall capacity growth, 3Q passenger numbers increased by 6.2%, with load factor gaining 1.3 ppts to reach 91.7%. The 1H2015 figure load factor was 89.7% and we calculate a 9M load factor of 90.6% (more than 1ppt higher than 9M2014). With one more (summer) quarter to come, easyJet should achieve a load factor for FY2015 comfortably ahead of last year's already impressive 90.6%.

Revenue per seat falls, but performs better than expected

Total revenue fell by 1.0% to GBP1,228 million in 3Q2015, with in revenue per seat down 5.4% to GBP59.04. Currency movements adversely affected revenue per seat, which would have been down by 2.8% at constant currency grew. This was better than easyJet's May-2015 guidance of a 4% drop, thanks to "trading in the UK and beach routes across Europe" in addition to revenue management initiatives.

The curves of year on year change for both revenue per passenger and revenue per seat have been on a broadly downward path for more than a year. These trends largely reflect the changing trend in the value of GBP versus EUR. The EUR has been on a weakening year on year trend versus GBP since easyJet's 3Q2014 (Apr-Jun). This means that revenues earned in EUR (which made up 42% of total revenue in FY2014) convert to a smaller number in GBP and reduce easyJet's reported revenue per passenger figures.

Nevertheless, there has also been some underlying weakening of pricing, particularly in 3Q2015 as capacity growth in easyJet's markets has accelerated this summer. Although easyJet continues to defy its critics with consistent load factor gains, there must surely come a time when further improvements in load factor are ever decreasing in magnitude. This will put the pressure of revenue per passenger as the main lever for growing revenue per seat.

Year on year change in easyJet's revenue per seat and revenue per passenger (left hand axis) and change in GBP versus EUR (right hand axis, reverse order) 1Q2014 to 3Q2015* 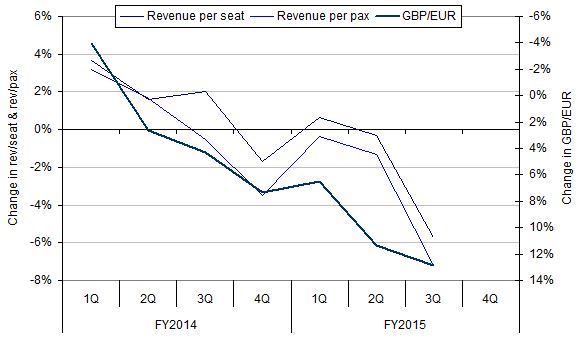 Cost per seat is a little higher than expected, due to disruption

Currency movements, specifically the weaker EUR versus GBP, have also worked to reduce cost per seat. easyJet's reported year on year change in cost per seat was a fall of 3.3% in 3Q2015, but this would have been down only 0.5% at constant currency.

Lower fuel prices also helped. Excluding fuel, cost per seat was down by 2.1% and would have been up by 2.8% at constant currency. This underlying increase in ex fuel cost per seat was similar to the 2.9% increase in 1H, but easyJet had been expecting it to slow to around 2% in 2H (although it did not specify how this might vary between 3Q and 4Q).

The higher rate of growth in ex fuel cost per seat at constant currency was the result of the disruption resulting from French ATC strikes and the Rome fire and higher charges at regulated airports in Germany and Italy. EasyJet said that disruption adversely affected pre-tax profit by GBP25 million (both in additional costs and lost revenue).

Nevertheless, its "easyJet lean" cost programme produced GBP7 million of savings in the quarter and GBP28 million in 9M2015 and the increased proportion of A320s versus A319s in the fleet led to a 0.5% cost per seat reduction year on year.

One area of modest concern is easyJet's on time performance (OTP), as defined by the percentage of flights arriving within 15 minutes of schedule. In 3Q2015, its OTP was 79%, down 5ppts year on year.

EasyJet attributes this deterioration mainly to its operations at London Gatwick, its largest base, where it had "issues" with its ground handling agent, Menzies. Speaking on a conference call with analysts to discuss the 3Q2015 results, CEO Carolyn Mc Call said that, following a change of management at Menzies, the situation was improving. A fire at Rome Fiumicino also contributed to the fall in OTP.

Nevertheless, easyJet's quarterly OTP has been consistently below its peak levels in recent quarters. When Ms McCall first arrived at easyJet, this was a major topic after the airline's OTP had reached unsatisfactorily low levels in FY2010. There was a dramatic improvement in FY2011 and further gains in FY2012, which were largely maintained in FY2013, particularly in 2H2013.

However, after a good showing in 1H2014, easyJet's OTP fell year on year in 2H2014 and has been below prior year levels every quarter so far in FY2015 (see chart below). Its 3Q2015 OTP of 79% was the first sub-80% figure for any quarter since FY2010. This is an important operational measure, particularly for business travellers, and it could have an impact on unit revenue if it is not satisfactorily improved.

Looking ahead to the rest of FY2015, easyJet had sold 77% of its 2H2015 seats as at 17-Jul-2015, fractionally ahead of where it was at the same time last year. The airline says that the underlying performance of the business remains consistent with the capacity and cost guidance given in May-2015, when it said that FY2015 seat growth would be around 5% before disruption and ex fuel cost per seat at constant currency would be up 2.5%, in spite of GBP15 million higher disruption costs so far this year versus FY2014. 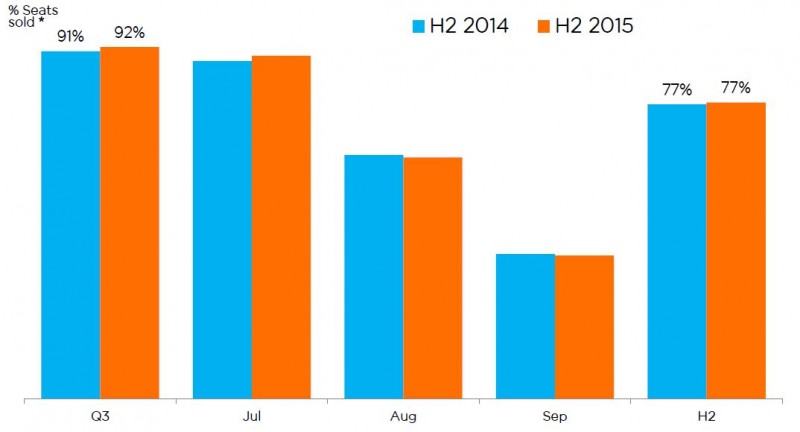 Ms Mc Call said that there had been some short term weakness in Greece, but that it had "rebounded well". Moreover, she said, easyJet had less exposure to Greece than does Ryanair and no exposure to the domestic market (easyJet's seat capacity in Greece is about two thirds that of Ryanair for the week of 20-Jul-2015, according to OAG). North Africa represents less than 1% of easyJet's seats.

EasyJet has provided guidance on FY2015 pre-tax profit for the first time this year, targeting a range of GBP620 million to GBP660 million. The midpoint of this range, GBP640 million, is 10% higher than FY2014's result of GBP581 million.

Nevertheless, easyJet is often conservative with its guidance and it remains quite possible that it could achieve a result towards the upper end, or even above, this range (as suggested by CAPA in our analysis of 1H2015 results, when we calculated that easyJet's guidance then pointed to a figure of GBP655 million).

Looking into FY2016, capacity plans for winter 2015/2016 are not yet finalised, but easyJet expects its seat growth to be a little higher than last winter's roughly 3.5% due to the three new bases Amsterdam, Hamburg and Porto. It currently expects overall capacity growth in its markets to be less than the 6.7% seen last winter. This may be beneficial to unit revenue. FY2015 has shown that it can grow profits even with a weaker unit revenue trend.

In summer 2016, easyJet will close its Rome Fiumicino base, while continuing to serve the airport, and open a new base in Venice. It will also expand its bases at Milan Malpensa and Naples. A new base at Barcelona will be established in Feb-2016. Barcelona is already in easyJet's network, but basing three aircraft there will allow a more efficient operation, according to Ms McCall.