Jet Airways' five-day pilot strike in Sep-2009 led to ticket cancellations and a revenue loss of USD16 million and subsequent fare reductions to stimulate demand. This negated the benefits of lower fuel costs in the quarter. Revenues slumped 27% to USD495 million in the three month period.

The carrier added that domestic air traffic, which comprises 38% of total revenues, “has started to show some signs of recovery in the current quarter”, although a worsened pre-tax loss of USD76 million was experienced for domestic operations in the quarter. 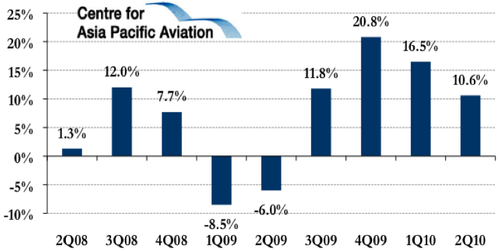 “Intense competition” and over capacity leads to yield declines, but expected to improve over next few quarters

The Indian carrier, which reported a 4.6% yield decline in the quarter due to “intense competition” and overcapacity, “expects yield improvements with the peak season, as well as premium demand revival in the next few quarters.”  Jet Airways and other airlines in the Indian market have started to raise fares over the last few weeks to improve the yield position, with Jet stating these increases “have not shown any negative impact on traffic”.

Jet Airways Executive Director, Saroj Datta, added, “the current capacity-demand situation is improving, capacity growth has been under check, while the demand continues to grow at a healthy pace. This coupled with a stable business scenario and steady GDP growth is an ideal environment for yields to go up from current levels. Further impact of our cost initiatives will start to show full blown results in the next few quarters”.

Jet transported 2.8 million revenue passenger in the quarter (-1.2% year-on-year), as the carrier reduced system-wide capacity by 18%, resulting in a load factor improvement of 10.7 ppts to 77.0%, although this was still significantly below the carrier’s breakeven load factor point of almost 95%. 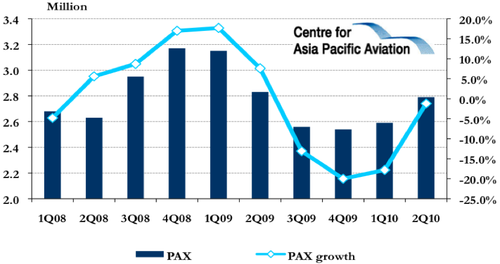 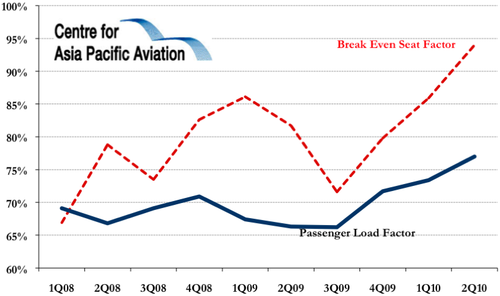 China Southern has benefited the most from the improved demand for domestic travel, as domestic passengers account for 92% of its total of 49.0 million in the nine months to Sep-2009 (+13.6% year-on-year).