European aerospace concern EADS has reported a strong 1H2009 financial performance, increasing revenue and preserving its cash stockpile, rallying investor confidence in the company, despite ongoing concerns regarding some major programmes. The company is “sticking to our priorities” of protecting its cash position, managing its order book and deliveries by closely responding to customer demands, and striving to ensure a competitive positioned across its different market segments. EADS shares traded up 2.3% yesterday, to EUR13.01 per share, after hitting a EUR13.56 peak in early trading.

EADS 1H2009 revenue climbed slightly, to EUR20.2 billion, most due to stronger performances in its Eurocopter (+6%) and Astrium (+29%) businesses. Revenue at the Airbus commercial aircraft segment dropped marginally, down 1% to EUR14.0 billion. Higher production volumes and cost cuts through the ‘Power 8’ programme were more than offset by price deterioration, hedge rates deterioration and increasing support activity costs.

As a result, the stronger revenue performance has not translated to improved profitability, with Group EBIT dropping 23% to EUR888 million, and net income down 6% to EUR378 million. 2Q2009 EBIT was up 69% to EUR656 million, compensating for 1Q2009 weakness. Foreign exchange effects heavily burdened profitability, with EADS reporting EBIT before exceptional items of approximately EUR1.3 billion.

EADS’ order intake has dropped from EUR51.2 billion in 1H2008 to EUR17.2 billion in 1H2009, a decline of 66%. Airbus accounted for the lion’s share of this drop, recording EUR6.2 billion in orders in 1H2009, compared to EUR44.1 billion in the same period last year. The Astrium satellite business increased its orders from EUR1.9 billion to EUR6.4 billion.

Despite recording just 90 aircraft orders (and 22 cancellations) for the first six months of the year, EADS has maintained its official expectation of 300 (gross) orders for Airbus for 2009. The commercial aircraft manufacturer has delivered 254 aircraft this year, slightly more than matching the 483 deliveries it made in the full year of 2008. EADS CEO, Louis Gallois, stated that the market for aircraft is still “alive”.

Airbus reaffirmed its goal of delivering 14 A380s in 2009, but has ordered a review of the programme as costs are still higher than expected. Airbus also confirmed it is maintaining its 2013 in-service target date for the A350 XWB, but stated the target is both “ambitious” and “tight”. The manufacturer still faces challenges related to aircraft weight, technical integration and certification.

EADS A400M troubled military transport programme received a boost on 24-Jul-2009 when member nations reaffirmed their commitment to the programme. Nonetheless, EADS stated there is a “continuing high level of uncertainty on the programme”, and there may be “substantial” penalties to pay for the manufacturer in the future, depending on the progress of development and the outcome of continuing negotiations on the programme. EADS has already booked EUR2.4 billion in fees on the programme, which is running approximately four years late.

EADS is still unable to determine the full effect that the global economic breakdown will have stretching into 2010. However, with Airbus deliveries expected to match 2008 levels, overall group revenues are expected to be “roughly stable” for the full year.

However, EADS sees no clear signs of stabilization yet, with traffic and yield still declining and funding conditions challenging airlines’ financial results. Despite the hazy outlook, Mr Gallois, stated that the market has emerged from the “panic” situation of earlier in the crisis. 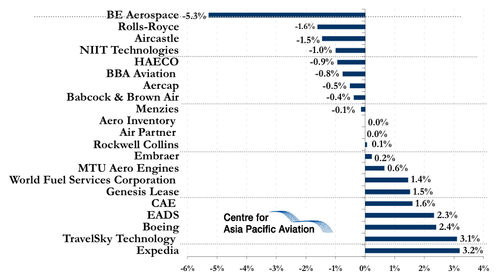