EADS rises on surprise order for Airbus, will the Boeing 787 fly earlier than expected?

Airbus’ orders and deliveries update for Nov-2009 contained a surprise: an order for 52 A320s from an “unidentified customer”. The order pushes the manufacturer’s gross orders to 225 for the year (and 194 net), and helped the share price of parent, EADS, rise 2.4% in trading on Thursday.

The manufacturer booked a total of 74 orders for the month, the strongest month of ordering this year. Airbus has maintained its target of approximately 300 gross orders for the year, suggesting it expects to book another 75 or so orders in Dec-2009. 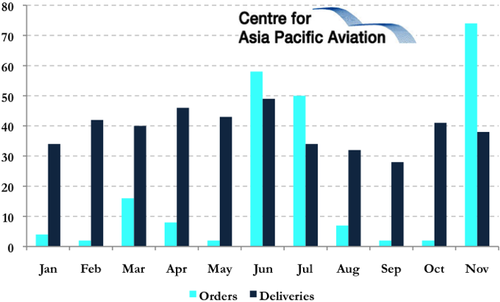 Meanwhile, Boeing could reportedly conduct the first test flight of its delayed B787 by mid-Dec-2009, slightly earlier than initial reports. The manufacturer recently completed the static test necessary to validate the side-of-body modification made to the B787, clearing the aircraft for its planned first flight. Boeing’s shares were flat on Thursday.

Bombardier’s aerospace division reported a 10% decline in revenue in 3Q2009, contracting to USD2.1 billion. The decline in revenue reflects lower deliveries and selling prices for business aircraft. This has been partially offset by higher revenues for commercial aircraft, mainly due to increased deliveries.

Commercial orders were down in 3Q2009, “reflecting the significantly reduced demand for commercial aircraft, consistent with the current worldwide economic environment”. American Eagle Airlines did convert 22 CRJ options to firm orders at the end of the quarter, but Bombardier intends to reduce CRJ production in 2010. The business aircraft market is “experiencing difficulties”, but there are “some signs of stabilisation”.

Bombardier’s firm order backlog slipped to USD18.1 billion as at 31-Oct-2009, compared to USD23.5 billion as at 31-Jan-2009. The decline in the backlog is due to business aircraft order cancellations, as well as lower overall levels of new orders in business aircraft and regional jets. Orders for the manufacturer’s new CSeries family in 1Q2009 has only partially offset the lower ordering in other segments.

Aerospace EBIT in 3Q2009 was USD103 million, a margin of approximately 5%. This compares to the USD176 million EBIT in 3Q2008, a margin of 7.7%. EBIT was affected by a lower prices for business aircraft and higher cost of sales per unit.

The outlook for 2010 is not strong. The Conference Board of Canada recently forecast a reduction in prices, production and profits for the Canadian aerospace industry in 2010, dragged down by slowing business jet ordering. Pre-tax profit is expected to decline nearly 20% year-on-year in 2010, and further production cuts are “likely” if the trend of deferred and cancelled orders continues.