Airbus' parent EADS reported a net profit of EUR103 million for 1Q2010. Revenue is up for the aircraft and aerospace manufacturer, but operating and net margins slipped over the first three months of the year.

EADS' revenue rose 5.7% to EUR8,950 million, an increase of EUR483 million. EADS took EUR14.4 billion in orders over the period, mostly from Airbus, well up from the EUR9.3 billion in orders in the slow 1Q2009. Revenue in most other business segments was relatively stable, with Airbus Military revenue down 15%, but compensated for by small improvements in the Astrium and Eurocopter businesses.

As of 31-Mar-2010, EADS' order book is valued at EUR415.8 billion, reflecting increases at all units, including a positive revaluation impact of approximately EUR22 billion due to the closing spot rate of the US Dollar that has significantly strengthened since year-end.

EADS’ costs were up EUR584 million, to EUR7,844 million. EBIT before one-offs fell to EUR83 million, down from EUR210 million the previous year. Operating profit was EUR103 million, down 64% year-on-year.

EADS free cash down approximately EUR1.1 billion in the period, declining from over EUR9.8 billion to just under EUR8.8 billion. Free Cash Flow before customer financing of declined EUR972 million. The manufacturer is having ongoing problems with its A380 programme and is funding development of the new A350. Customer financing cash-outflows of around EUR1 billion are expected over 2010.

EADS is reporting signs of improvement in the commercial aircraft environment. CEO Louis Gallois, expressed cautious optimism that the industry is “slowly on its way back up”. However, the manufacturer has suffered from hedging losses and exchange rate fluctuations, which cost it nearly EUR300 million. The company suffered a decline of EUR3 billion in the net fair value of its cash flow hedges.

EADS reaffirmed its outlook for the full year, with revenues in line with 2009’s EUR42.8 billion. EBIT before one-offs is expected to be EUR1 billion, although the A380 will continue to weigh substantially on the manufacturer. EADS is forecasting gross orders at Airbus of 250-300 aircraft in 2010, with deliveries “roughly stable” on 2009. 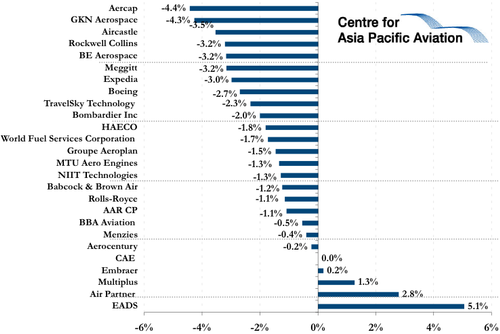