EADS CEO, Louis Gallois, defended the use of launch aid by EU governments to support Airbus programmes, claiming they were more visible and transparent that subsidies received by Boeing. He told the Seattle Times that Airbus would “not plead guilty, and will produce arguments in its defense" in the ongoing WTO case.

Mr Gallois also stated EADS favours the establishment of a new trade agreement to end the dispute, but if no agreement can be reached the company will continue with the dispute until a final decision is reached, in 2012 or 2013.

Boeing Commercial Airplanes meanwhile reiterated its forecast that the Asia Pacific region will become the world's largest aviation market over the next 20 years, requiring 8,960 new commercial jets valued at approximately USD1.1 trillion. The market is the largest in the forecast for new aircraft in terms of both units required and market value. The Asia Pacific region is forecast to grow from 31 to 41% of the world air travel market between 2009 and 2028. Over the 20-year forecast period, Boeing expects 5,600 narrowbody, 2,590 twin engine widebody and 330 large widebody deliveries, as well as 440 regional jets. The Asia Pacific fleet will nearly triple from 3,910 to a total of 11,170 aircraft.

Bombardier Commercial Aircraft VP Sales Asia Pacific, Trung Ngo, meanwhile stated the decline in airline passenger traffic has bottomed out and the manufacturer forecasts a resumption of “modest growth”. Cargo traffic is also expected to resume growth, with the recovery of economic and manufacturing activity. Bombardier cautioned that there would be a lag between aircraft orders and profitability, as manufacturers would be forced to wait for airline profitability to return before aircraft sales rebound. China is expected to be a key market for Bombardier, accounting for 17% of total aircraft demand for the next 20 years.

In trading yesterday, major aircraft manufacturers were mostly positive, with Embraer up 0.1%, EADS gaining 0.3% and Boeing up 2.1%. Bombardier gained 2.4% in trading. 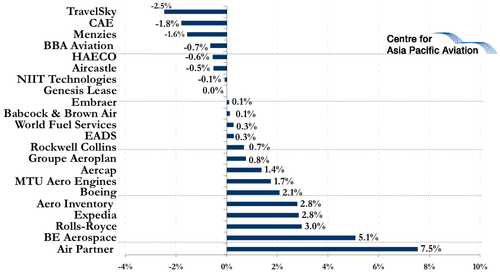