DXB handled 18.36 million international passengers over the first three months of 2014, while LHR handled a total of 16 million passengers. Dubai had growth of 11.4%, while London Heathrow traffic grew just 0.5% for the period.

Dubai Airport’s stay at the top was short-lived however. From 01-May-2014, runway works at the airport have cut capacity by better than 20%. At present traffic and growth rates, that could reduce the airport’s total annual traffic by as much as 2 million passengers. DXB is however still on track to handle more than 70 million passengers in 2014.

Planned new capacity will allow continued high levels of growth; but southeast England is meanwhile unlikely to achieve even one additional runway within the next 10 years.

This has been a remarkable decade of growth for Dubai

Over the past decade, traffic at Dubai has more than tripled, while growth at London Heathrow has effectively stagnated.

When Heathrow was the largest airport for international passenger traffic in the world in 2004, handling 67.1 million passengers, Dubai was 45th on the list, handling just under 22 million. 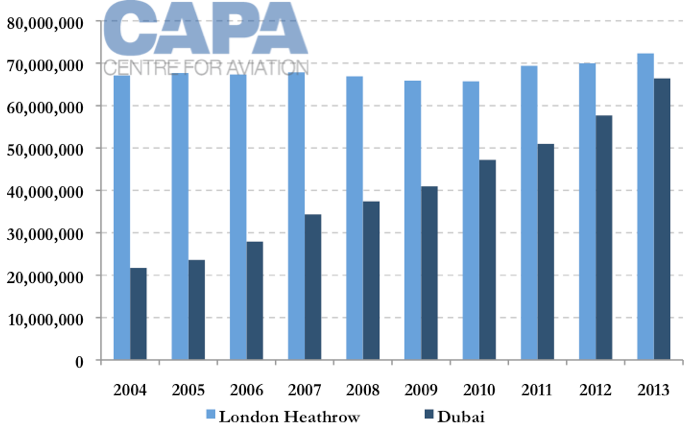 The growth of DXB and stagnation at LHR is as symptomatic of the Middle East’s rise as a new hub for international aviation as it is of the crisis of airport capacity in the southeast of the UK.

Meanwhile, the southeast of the UK shows little sign of even one new runway, despite decades of talk. Dubai Airports has plans to increase capacity at DXB from 75 million currently to 100 million by 2020, investing more then USD7.5 billion in the expansion.

According to the UK Airports Commission, London Heathrow is “effectively full and operating at 98% capacity”. The airport’s two runways handle a total of 472,000 flights per year. According to LHR, the capacity constraints faced by it are costing the UK economy up to GBP14 billion p/a in lost trade opportunities, a figure it estimates could balloon out to GBP30 billion p/a by 2030 if the situation does not change.

LHR is lobbying for a third runway, which it estimates could be built by 2025 at a cost of GBP14-18 billion and would add enough capacity to increase capacity to 130,000 million passengers and 740,000 flights p/a. However, the airport faces competition for the investment and approval, with proposals for expansions at London Gatwick and London Stansted, as well as an ambitious plan for a completely new Thames Estuary airport with four runways and capacity for 110 million passengers p/a.

Dubai is not without its own problems though. According to UAE General Civil Aviation Authority director general Saif Mohammad Al Suwaidi, the airport “has reached its maximum capacity [and] cannot offer more slots to newcomers.” For several periods per day, during the major arrivals/departures banks of main home carrier Emirates, the airport operates either at or near to peak runway capacity.

However, the airport master plan calls for development of four more runways and an ultimate expansion in capacity to 160 million passengers p/a. Total investment in the airport, as well as the related cargo and logistics facilities, residential and industrial areas and free trade zone is projected at around USD80 billion.

There are also “invisible infrastructure” constraints in the skies, in the form of airspace management concerns.

Runway capacity in the Middle East remains a limiting factor, even with so much investment. Additionally, much of the Middle East’s airspace is dedicated to military operations or otherwise blocked for access by commercial flights.

DXB operator Dubai Airports, as well as airlines and other regional aviation industry stakeholders, have expressed concerns that unless a cooperative approach is adopted between Middle East states, capacity bottlenecks and operational inefficiencies will constrain growth in the Gulf’s already extremely complex air traffic environment.

Over the full year, as a consequence of the redevelopment, DXB may not beat LHR to the top spot for international passenger traffic, due to the 80-days of phased refurbishment and upgrades for both runways. For most of the period, the airport will be reduced to just a single operational runway.

The works are expected to cut flight numbers by 26%. DXB’s two home carriers, Emirates and flydubai, are contributing 52.8% of the total required reduction, while the restriction of freighters and charter operators together with other scheduled passenger airlines are contributing the remainder. Dubai Airports stated it has built in flexibility into the flight schedule over the 80 days to “ensure that should there be any delays, such as poor weather conditions, it is able to quickly recover to normal operations.”

Actual seat and passenger numbers will drop by less than the 26% in flight numbers, as airlines are expected to prioritise larger aircraft for DXB flights during the period, maximising seat counts and load factors where possible.

The UAE’s smaller airports will see a major benefit from DXB’s loss. All freighter, charter and general aviation flights will be diverted to DWC for the period, as well as a fair proportion of scheduled airline traffic. More than 600 flights a week will operate at DWC during the DXB works. Sharjah International Airport expects to receive an additional 200 weekly flights. Al Ain and Al Bateen also expect extra flights, particularly from private and charter operators.

Some 18 airlines have applied for slots at DWC during the runway refurbishment period.

flydubai shifts to DWC; a UAE1 billion impact on Emirates

flydubai plans to shift flights to 25 destinations to the new airport during the period DXB is affected, while operations to a further 11 destinations will be split between DWC and DXB. According to flydubai, the approach it has taken will minimise disruption to passengers during this period, operating some flights from DWC while DXB is constrained. However, it has advised passengers to check bookings to confirm which airport they are arriving at/departing from.

The carrier plans to transfer flights back to DXB from 21-Jul-2014, but in the long term, flydubai is due to shift away from DXB in favour of the new airport at Jebel Ali. According to UAE General Civil Aviation Authority director general Saif Mohammad Al Suwaidi the low-cost carrier's move to DWC will not not involve splitting its operations between the two airports.

Emirates expressed full support for the runway upgrades, commenting they are in the “wider interests of Dubai’s development as a global aviation hub”. The carrier accounts for nearly half of all DXB traffic with around 220 flights per day. It does not plan to shift any passenger flights to DWC. However, Emirates Cargo freighter operations will be operated from the new airport. The carrier also has plans in place to accommodate flights at other UAE airports, if necessary.

The DXB runway closure will affect around 5,400 Emirates flights.

The carrier will ground 22 aircraft over the period, a scaling-back of operations during the runways closure that has been planned months in advance. Emirates stated passengers will not be affected, as those flights were not made available for purchase thanks to long term planning.

The carrier estimates that its full-year revenues will be affected by UAE1 billion (USD272 million) from the disruption. Flights will be reduced to 40 destinations and there will be schedule and timing alterations to others.

Emirates will also use the DXB situation to its advantage, using the runway refurbishment period to carry out maintenance and avionics enhancements to its aircraft. Work will include upgrades to its GCS (Global Communications Suite), which requires about 2,200 man hours of mechanical and avionic work per aircraft, as well as continuing its fleet-wide inflight entertainment system and cabin maintenance improvement programme.

Emirates Engineering will also carry out its first-ever landing gear change to a Boeing 777-300ER, the first of 70 it will eventually perform.

While the short-term effects will see DXB slip behind LHR for the full year, the upgrades will ensure that Dubai has the infrastructure and capacity required to not only become the largest international airport in the world by 2015, but also maintain that position.

With Dubai Airports investing more than USD7.5 billion in enhancements to existing terminals and the construction of new ones, as well as continued growth by the home carrier and the addition of new airlines, DXB's growth will quickly leave behind the traditional international hubs.