Planned Northern Mariana Islands flag carrier Saipan Air has indefinitely postponed its launch following its charter partner Swift Air failing to fulfil its contractual obligation to provide aircraft a mere week before Saipan Air's planned 01-Jul-2012 launch to Tokyo Narita. Swift Air subsequently filed for bankruptcy, leaving it unclear if Saipan Air can recoup any of the USD1.26 million it paid to the US charter operator.

At the same time of Saipan Air's collapse, Delta announced it would increase summer capacity between Tokyo Narita and Saipan from 14 weekly flights to 18, although this addition will still be less than what Saipan planned to introduce, and will leave other markets unserved. Delta is the sole operator between Tokyo and Saipan, an island commonwealth of the US that has been vying with Guam to increase tourists. The current wave of Japanese LCCs, as part of a larger North Asian LCC movement, may achieve that in Saipan Air's place.

While the Northern Marianas in recent years had seen a number of proposals for its first flag carrier, Saipan Air by far came the closest to launching. It intended to restore tourism arrivals from Japan, which plummeted and never recovered after Japan Airlines pulled out of Saipan in 2005.

Japanese visitor arrivals to Guam and the Northern Mariana Islands: FY2002 to FY2011 The tourism industry provides half of the employment of the Northern Marianas, a territory of the US. Saipan Air intended to launch services to Osaka and Tokyo, and also gain access to new markets via flights initially to Beijing and Shenyang. Although Saipan competes with Guam on visitor arrivals, Saipan receives more Chinese visitors than Guam, a potentially critical stepping stone to amassing further scale as that market grows.

Saipan Air's failure to launch was largely due to circumstances outside of its control. The carrier was privately owned by Tan Holdings, which has significant business interests in Saipan, including hotels, and thus stood to benefit from an increase in the number of visitors. The Northern Marianas had counted on the increased tourist numbers boosting the territory's budget by USD5-7 million, a critical amount as its budget in recent years had been slashed from over USD200 million to USD102 million.

Saipan Air pursued a virtual airline business model, which reduces risk as well as operational work for the owners. Saipan Air had contracted US charter operator Swift Air for two Boeing 757-200s and a 737-400.

Saipan Air said in a statement that Swift Air backed out of the venture one week prior to the planned 01-Jul-2012 launch and cited "financial incapability" as well as failure to acquire certification from the US Federal Aviation Administration (FAA) for an expanded Air Operator's Certificate (AOC). Saipan Air said it had paid Swift Air USD1.26 million in security deposits, but it is unclear if Saipan Air can recoup as Swift Air filed for Chapter 11 bankruptcy protection. Saipan Air said it has filed proceedings with the US Federal Bureau of Investigation and is considering legal action against individuals at Swift Air, which is permissible under bankruptcy law.

Swift Air also reportedly owes USD12.6 million to lessor ILFC. The source of Swift Air's troubles reportedly originate in the charter carrier failing to secure a USD5 million loan to fund its operations between April and September when sports charters, a large component of its business, are light as it is the off season.

Saipan Air elected to indefinitely postpone its launch as the preparation work could not easily be transferred to another partner, and the time required for regulatory approvals would see Saipan Air miss the peak summer season of traffic.

Delta Air Lines adds Tokyo capacity, but other routes do not see backfill

Delta moved to add four additional weekly flights between Tokyo Narita and Saipan, bringing its total roundtrips on the route to 18. Delta's additional frequencies represent just over half of the capacity Saipan Air planned to initially put into Tokyo. Saipan Air's other planned markets have not yet seen backfilling of capacity. Saipan Air was due to challenge Asiana between Saipan and Osaka Kansai as well as provide new service to Beijing and Shenyang.

The carrier spoke of later expanding to additional Japanese destinations like Fukuoka, Nagoya and Sapporo, as well as to Hong Kong and Taipei. It may be some time before those cities receive services to Saipan. All of those destinations currently do not have non-stop service to Guam. 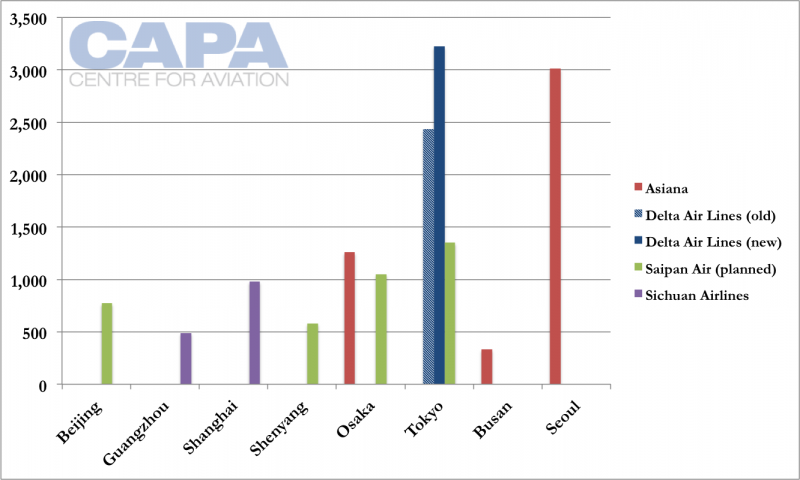 It is inevitable Saipan will see new services as the expansion of North Asian LCCs gains scale. The three new LCCs in Japan – AirAsia Japan, Jetstar Japan and Peach – are contenders, as are carriers like Jetstar Hong Kong, Hong Kong Express and future LCCs. Peach has made general remarks about serving Saipan and Guam.

While service to Saipan would require significant regulatory work with the US, clearance could also be used to served Guam. AirAsia Japan and Jetstar Japan, which have not ruled out widebody service, could also potentially serve Hawaii, where legacy carriers see high fares but varying profitability due to the lack of substantial business traffic. Short-haul routes offer greater potential. Delta in the year to Nov-2011 recorded a 78% load factor between Tokyo Narita and Saipan while current bookings indicate yields of approximately USD15 per available seat kilometre, double Delta's systemwide average.

There was no significant past history at Swift Air that should have given Saipan Air cause for concern, although the slim nature of Swift Air's operation – which provided the agility and prices Saipan Air needed – had previously resulted in contention with operators, although this is far from the exception in the industry. Saipan Air did not have a flawed vision, but rather its effort to reduce risk by being a virtual operator also made it place all risk with one partner that ended up being unsound.

Whether the carrier plans to launch in the medium term remains uncertain. Tan Holdings may want to spend the rest of the year seeing development in North Asian airlines and if they will backfill the capacity Saipan Air intended to serve. If there is still a gap in air services, Saipan Air may still have relevance. Otherwise Tan Holdings will benefit from the ground-based activities of any influx of visitors.