If anyone was in doubt about who the 900-pound gorilla is in New York City, one of the world’s top aviation markets, that doubt was eradicated on 16-Dec-2011 when Delta announced it is making a domestic hub of New York’s LaGuardia Airport (LGA), improving its USD13 billion economic impact on the area. But Delta will still be in second place. It offers approximately 400,000 weekly domestic and international seats across New York's three airports compared to United-Continental's 651,000.

The move comes a few days after the airline closed its slot swap deal with US Airways, giving Delta 132 new slot pairs at the airport, which the airline described as New York’s preferred business airport. Delta may be able to close the gap on United-Continental, but the world's largest airline will still be able to claim that title in New York.

In terms of weekly capacity by seats, Delta is presently third to US Airways and American Airlines at LaGuardia. However, the Port Authority of New York and New Jersey puts Delta first by passengers with its 29.6% market share, compared to American’s 20.9% and US Airways’ 17.6%. The slot swap gives Delta a 45% market share, placing American – which has pegged New York as one of its five cornerstone markets – at a significant disadvantage. 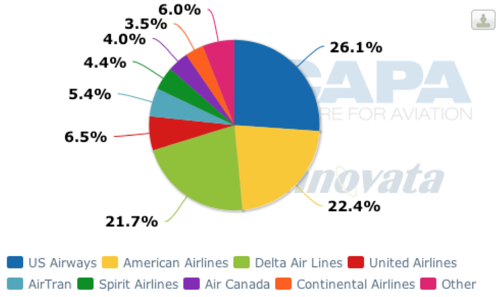 Star Alliance leads alliances in terms of seat market share at LaGuardia, holding a 40.1% capacity share through US Airways, United Continental and various other carriers. American Airlines (the only US oneworld member) has 22.4%, while Delta accounts for almost all of SkyTeam's 21.7%. 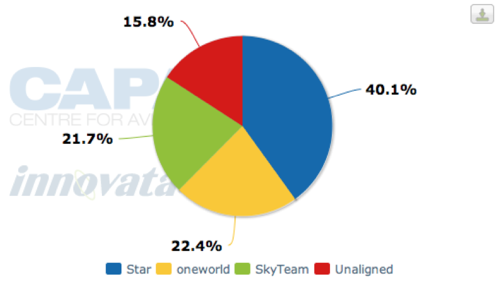 Delta CEO Richard Anderson was on hand for the announcement as senior vice president – New York, Gail Grimmett, described the impact Delta will have on New York. It is the single largest expansion by any carrier at LaGuardia in 40 years and increases flights by more than 60% and total destinations by more than 75%. By next summer, Delta will add 100 new daily flights to 29 new cities, many of which will launch on 25-Mar-2012.

Delta is adding this capacity without going beyond the largest landing and takeoff footprint it ever had at the airport (it has decreased its presence in recent years), but is accomplishing its expansion by upguaging aircraft, which adds more than four million new seats in the market. It will offer more domestic flights and seats from New York’s three major airports than any other carrier, with more than 400 daily domestic departures from LaGuardia, JFK and Newark. 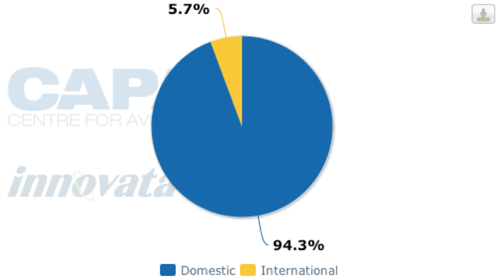 LaGuardia is largely a domestic market, with international services limited to Canada and the Caribbean. (This is a result of a lack of full customs and border control facilities; passengers from Canada and the Caribbean typically pre-clear customs and immigration in the foreign port. La Guardia also typically restricts flights from the airport to be short- and medium-haul flights in almost.) 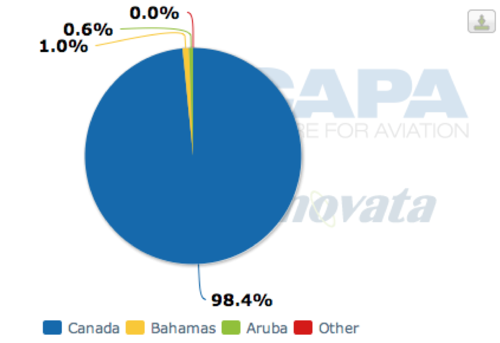 Delta's New York plan is aided by similar cuts at Washington National Airport and thus will not impact the airline's plan to cut 2012 capacity by 2-2.5%, said Mr Anderson.

He reiterated his expectation the company will make USD800 million (USD1.1 billion excluding special items) in profit in 2011, adding moves at New York are key to the airline’s strategy. System wide capacity will also be down 5% at Delta in 4Q2011. The increase comes despite a 30% (USD3 billion) increase in fuel costs.

During the airline’s Investor Day this month, Mr Anderson also raised the company’s operating margin guidance to 6-8%, compared to the 5-7% in earlier guidance. He also indicated unit revenue will rise 11-12% in the fourth quarter. With its SkyTeam partners Air France-KLM, Delta is expected to cut European capacity by 7%.

In total, Delta will operate 260 daily flights to 60 cities, including the airport’s top 50 markets, more than any other airline. In addition, it has 140 flights to more than 80 destinations out of New York JFK.

The carrier is also investing USD140 million in overhauling La Guardia Terminal C and other infrastructure at the airport including an airside aerobridge to its current operations at Terminal D, making connections between C and D easier. It is also installing a SkyClub lounge at Terminal C, taking over the space US Airways had for its club. The airline’s USD1 billion investment at LaGuardia and New York JFK airports is part of its USD2 billion investment in passenger service upgrades that have been underway for some time. Delta expects to complete the USD1.2 billion renovation at New York JFK’s Terminal 4 in the spring of 2013.

In addition, it will retain its shuttle service between New York, Boston, Washington and Chicago O’Hare out of the popular, art-deco marine terminal at the airport.

The initial route announcements includes six daily roundtrips using ERJ 170/175s to Dallas/Fort Worth as American, owing to bankruptcy, is expected to cut the 15 daily flights it has in the market. Delta is also moving into the Miami market, another American cornerstone market, with four trips daily.

American is expected to reduce capacity by about 10%, providing plenty of opportunity for its competitors. It is already down 2.5% since the beginning of December, more than the 1.5% guidance the carrier provided at the end of the third quarter. The moves impact 44 domestic routes and 11% of its total routes.

Delta already has an impressive role at LaGuardia given the fact that Atlanta is the top market, which is complemented by the fact that it added Chicago to its shuttle operations. Dallas is the fourth largest market for the airport, which will probably give Delta a bigger role with the cuts anticipated by the American bankruptcy. 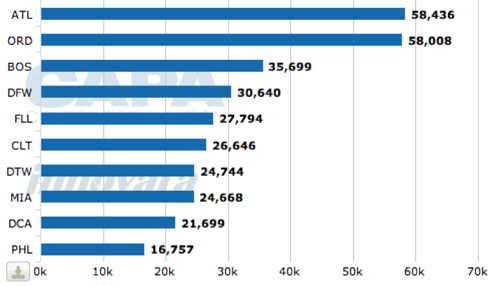 Delta is also going after Houston and Charlotte, also in the top 10, as well as Denver, Pittsburgh, Milwaukee and Cleveland while adding frequency to Chicago, Nashville, Raleigh-Durham and Portland, ME.

Its choice of markets seems to reflect a new vigour in competing against United hubs at Houston, Chicago and Denver and US Airways’ hub at Charlotte. Much of its new service will be non-stop in markets that have not enjoyed non-stop in the past. Even so, these flights will still be in minority positions compared to the flights fielded by the other carriers at their hubs but it does suggest that Delta is being more aggressive in an effort to attract the corporate traveller into and out of the nation’s top market.

It was clear that JetBlue was also in its sights as it will be providing stiffer competition with jets than the turboprops fielded by US Airways. JetBlue already serves the four new markets Delta is fielding at Buffalo, Rochester and Syracuse as well as Burlington, VT hard by the New York and Canadian borders. The move could dilute the effectiveness of the American/JetBlue deal.

As part of its New York expansion, Delta is also beefing up New York JFK service including increasing the frequency on several long-haul domestic routes from JFK to the west coast, including Los Angeles, another American cornerstone market, and San Francisco, now dominated by United. That means stiffer competition for jetBlue and Virgin America.

It is also drawing more international traffic with service from Greensboro (Southwest and US Airways territory) as well as New Orleans and Kansas City. Its new LaGuardia service to Buffalo, Cleveland and Richmond will complement the service it has at those points to New York JFK.

It is also expanding Caribbean destinations, now a cornerstone of jetBlue’s expansion strategy.

Delta still has some catching up to do in New York compared to the weekly seats in the market by United/Continental, about 600 million, between the three airports. Right now, Delta has 400,000 weekly seats at all three New York airports.

As at LaGuardia, Delta leads in passengers carried at New York JFK as it does in seats trouncing both American and JetBlue. It is also second at New York Newark Liberty International Airport. 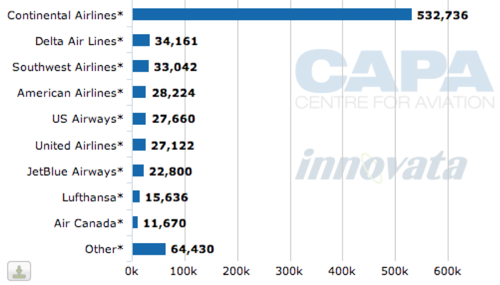 Delta went out of its way several times to note that LaGuardia was the preferred airport to Newark amongst business travellers. 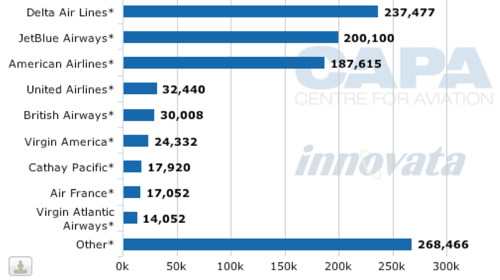 However, the LaGuardia chart will look vastly different next summer when the full impact of Delta’s additional four million new seats are felt as it replaces US Airways in the top spot at LGA. 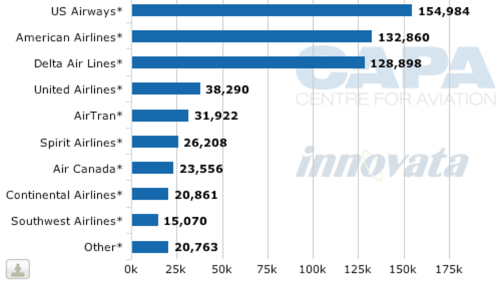