Delta Air Lines aims to leverage its strong position in Seattle and the long-standing relationship the carrier has built with Alaska Airlines to expand its offerings to Asia. Through the expansion, Delta could intensify competition from the US west coast to Asia with United, which has recorded some sluggishness in its Asian performance during the last year. If Delta succeeds in launching proposed new services to Shanghai and Tokyo’s Haneda airport, Seattle will join the airline’s Detroit hub in becoming a major Asian gateway for the carrier.

If the requisite regulatory approvals for seven weekly frequencies are awarded, Delta intends to launch new service between Seattle and Shanghai in Jun-2013. The carrier is also seeking approval to launch flights between Seattle and Tokyo Haneda. Delta already serves Seattle from Tokyo Narita. Delta is seeking approvals to transfer to the Seattle-Haneda route the traffic rights and Haneda slot it had used for its Detroit-Haneda service, which it axed on 30-Sep-2012 after declaring that the route was underperforming. But American, Hawaiian and United have also all applied to use the Haneda slot originally awarded to Delta for Detroit-Haneda service.

Delta’s decision to pursue expanded service between Seattle and Asia would allow the airline to build up its presence to Asia from the US west coast, and capitalise on the ready-made Asian passenger base in Seattle for both leisure and business traffic. Statistics from website city-data.com show that 14% of the city’s population is of Asian descent, which is higher than the 1% Asian population in Delta’s Detroit hub, the 3% representation in its Atlanta headquarters and the nearly 6% Asian population in the carrier’s Minneapolis hub.

Narita, where Delta operates an intra-Asia hub at Narita with flights to several destinations in southeast and north Asia, is about 70km from the centre of Tokyo compared Haneda, which is only about 20km from the city centre. Delta is among several foreign carriers which gained access to Haneda in late 2010 after the airport opened a fourth runway.

Leveraging a strong position in Seattle to fuel Asian growth

While Seattle is technically not a hub for Delta, the airport has strategic significance for the carrier as evidenced by its leading position among US legacy carriers in terms of seating capacity on offer and its second place standing behind Seattle’s dominant domestic carrier Alaska Airlines. Seattle was a former mini-hub of Northwest Airlines, which was acquired by Delta in 2008 and historically operated several trans-Pacific routes from Seattle.

Based on current schedules in Innovata (08-Oct-2012 to 14-Oct-2012), Delta accounts for 11% of seating capacity at Seattle Tacoma International Airport, making it much smaller than Alaska which has a 51% capacity share and slightly larger than United which has a 10% capacity share. On an ASK basis, Delta accounts for 19% of capacity at the airport compared to 10% for United and 33% for Alaska. 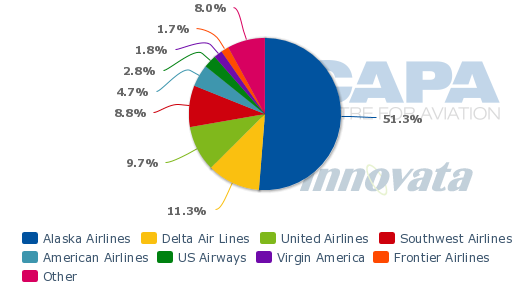 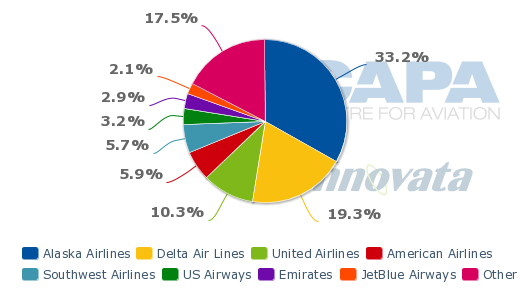 Schedules show that from ASK perspective, Delta’s capacity deployed from Seattle more than doubles its offerings from its smaller domestic hubs in Memphis and Cincinnati, which have been slowly shrinking during the last few years.

The relatively high ASK figure for Delta in Seattle reflects the fact the carrier's operation in Seattle has a predominately international focus. Delta is now the largest international carrier at Seattle, based on ASKs, with a 33% share of total international ASKs. Delta currently links Seattle with five international destinations - Beijing, Osaka and Tokyo Narita in Asia as well as Amsterdam and Paris CDG in Europe.

(Delta also linked Seattle with London Heathrow until early 2009. The Amsterdam and Paris routes have proven to be viable while London failed because Amsterdam and Paris are hubs for SkyTeam partner Air France-KLM, opening up connections for Delta's Seattle passengers throughout Europe, the Middle East and Africa.) 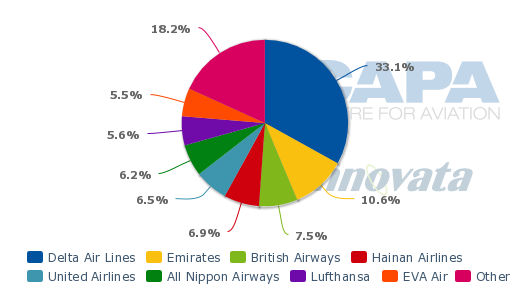 Domestically, however, Delta only accounts for 5% of seats, making it the fourth largest domestic carrier in Seattle after Alaska, United and Southwest. Delta relies primarily on domestic connections with codeshare partner Alaska Airlines to feed its international operation at Seattle. Delta operates only seven domestic routes from Seattle compared to over 50 for Alaska.

Delta's domestic routes from Seattle include flights from its hubs in Atlanta, Cincinnati, Detroit, Minneapolis, New York JFK and Salt Lake City as well as from Honolulu. As part of its Seattle international expansion announced on 8-Oct-2012, Delta unveiled plans to add a fifth daily frequency on the Seattle-New York JFK route. JFK is Delta's main hub for trans-Atlantic services. 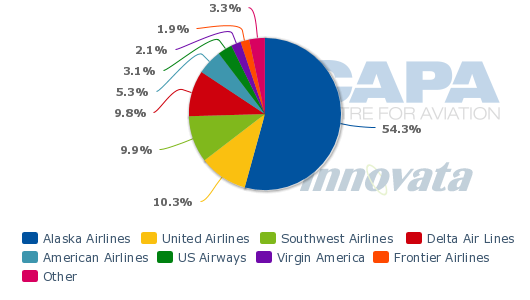 Delta is taking advantage of Seattle’s well-suited geography for Asian flights as it works to expand its network from the airport. According to Innovata, service to north Asia accounts for the bulk of international seat capacity deployment from Seattle. Narita, Beijing and Seoul are now among the top 10 international destinations served from Seattle in terms of seats on offer. 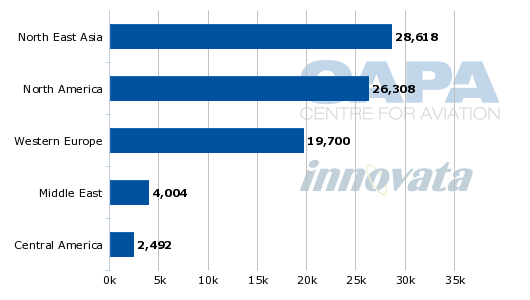 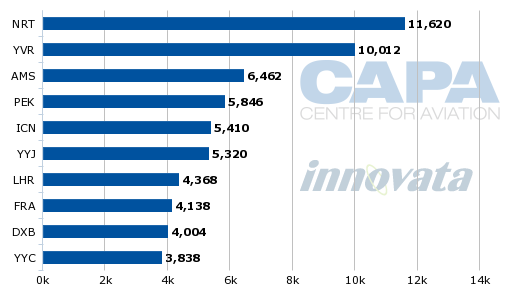 The new service to Shanghai would bolster Delta’s offerings between Seattle and Asia to four markets. Presently, Delta operates service from Seattle to Beijing, Osaka and Tokyo Narita, and its SkyTeam partner Korean Airlines offers flights to Seoul.

Asiana Airlines also serves the Seattle-Seoul route. Delta is uncontested in its service offerings between Seattle and Osaka but competes with Hainan Airlines on flights to Beijing and Star Alliance members ANA and United on flights to Tokyo Narita. Hainan is the larger carrier in the Seattle-Beijing market in terms of seats deployed, accounting for a 61% share.

Shanghai would become a new market on offer from Seattle, and it makes sense for Delta to serve one of the world’s most populous cities and one of the largest metropolitan markets in China from Seattle. Shanghai has a strong presence in both the financial and manufacturing sectors, and Delta’s fellow SkyTeam members China Eastern and China Southern both have large operations at Shanghai Pudong.

China Eastern and China Southern currently account for a total of 41% of the seating capacity at Shanghai Pudong, where the two carriers will be able to offer Delta's Seattle passengers connections throughout China and Asia. 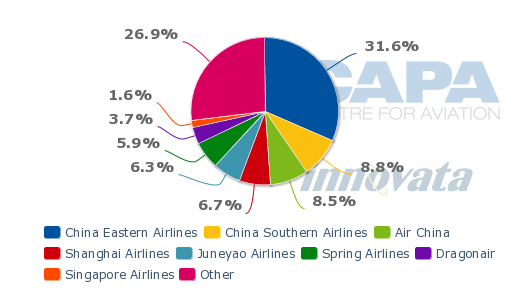 Delta currently offers service from its Detroit hub to Shanghai, but it makes sense to also offer service to the bustling Chinese metropolitan area from the US west coast. By offering service from Seattle, Delta would be shielded from the intense competition in the Los Angeles-Shanghai market, which is operated by American, China Eastern and United. 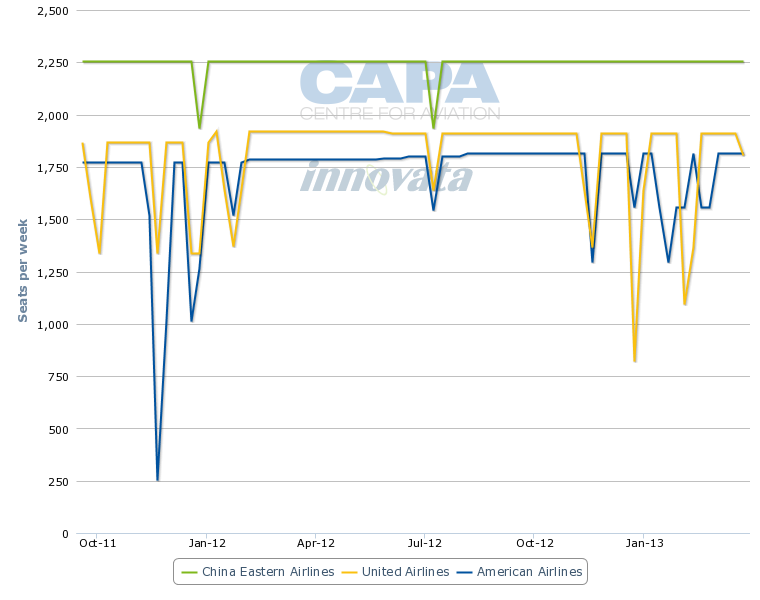 United also serves Shanghai from its Chicago and San Francisco hubs. Delta’s new flights between Seattle and Shanghai could pressure United’s San Francisco service by diminishing some of the feed on United’s Seattle flights that continue onto Shanghai.

A significant element in Delta’s new service push from Seattle is the relationship between Alaska and Delta. The deep codesharing pact between the two carriers allows Delta to access more than 50 markets served by Alaska from Seattle, while Alaska’s passengers feeding into its Seattle hub can connect to Delta’s long-haul flights.

The carriers estimate about 1,200 passengers connect each day in Seattle between Delta and Alaska flights. As Delta expands in Seattle this figure will grow significantly, benefitting both carriers. Delta estimates that more than 200,000 international passengers have connected between Alaska and Delta flights during the last year.

The feed Delta enjoys from Alaska allows the US major to retain a key position in a west coast metropolitan market with a large Asian population without the complexities of formalising Seattle into a hub operation. Essentially, the partnership with Alaska allows Delta to have a significant footing on the west coast to create some discomfort for United at its San Francisco hub, and allows Delta to diversify from the highly fragmented Los Angeles market.

Delta’s efforts to move Haneda service from Detroit to Seattle and its decision to expand its Asian offerings from Seattle could signal a shift away from Detroit, which was historically the Asian gateway of its merger partner Northwest. If Shanghai proves to be a success, and if Delta triumphs in fending off competitors to launch Seattle-Haneda service, Seattle could be on its way to challenging Los Angeles and San Francisco as west coast Asian gateways with Delta leading the charge.