The majority of North and South American carriers stocks fell on Tuesday (15-Dec-2009), after IATA forecast further losses for airlines in 2010, despite the AMEX Airline Index currently up 50% year-on-year, in anticipation of an economic recovery in 2010.

IATA revised its financial outlook for 2010 to an expected USD5.6 billion global net loss, larger than the previously forecast loss of USD3.8 billion. For 2009, IATA maintained its forecast of a USD11 billion net loss.

North American carriers are expected to see losses reduced from USD2.9 billion in 2009 to USD2.0 billion in 2010. The relative improvement is largely the result of pricing power and cost reductions gained through capacity adjustments. Latin American carriers are meanwhile expected to be the only profitable regional grouping in both 2009 and 2010. The profit in each year is expected to be USD100 million, largely due to the benefit of relatively strong economies in South America and the efficiencies gained through regional airline structures.

Delta Air Lines (-1.3%) made its own forecast during trading, with President, Ed Bastian, stating the carrier expects to report a loss of USD1.1 billion in 2009. However, Mr Bastian added 4Q2009 revenue trends have suggested financial performance will improve in 2010.

The carrier now expects unit revenues to return to positive growth in 1Q2010, and consistently achieve a 10-12% margin and a decent return on investment, to be achieved through maintaining current capacity and cost levels. 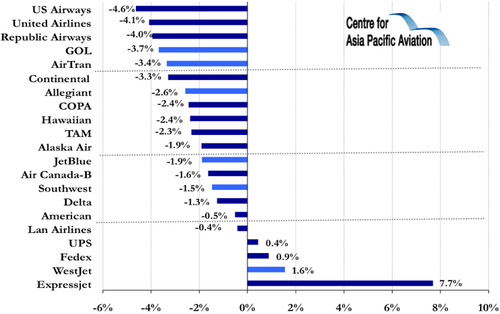