US major carriers Delta and United are capping off expansion to the region of western North Dakota in Jun-2013 when they introduce service to Dickinson, a destination which has suddenly become attractive as the energy industry is driving a thriving economy in the region. Both carriers introduced flights to nearby Williston, North Dakota in late 2012 to take advantage of strengthening traffic patterns triggered by the extraction and production of crude from the Bakken Shale formation, which is a cheaper option for US refineries than Brent crude sourced from the North Sea.

In addition to capitalising on increased demand for air travel to western North Dakota, Delta hopes to benefit from the improved economics of Bakken crude as the carrier recently received its first shipment of oil from the Bakken Shale at its Trainer refinery near Philadelphia, Pennsylvania.

Delta and United are hoping to take advantage of continued economic strength of the western region of North Dakota that started with the uptick in production of Bakken crude that began in 2007. Since that time output has mushroomed with the US Energy Information Administration estimating North Dakota’s total oil production averaged 660,000 barrels per day in Jun-2012, a 71% jump year-over-year. In the short-term the moves by Delta and United to bolster their service to the region seem logical as the economics of operating to the majority of smaller markets in the US become less viable for the country’s major carriers.

Estimated crude oil production in North Dakota (thousands of barrels per day): Jan-2005 to May-2012

Both Delta and United began serving Williston, North Dakota in Nov-2012 from their Minneapolis and Denver hubs with 50-seat regional jets. United also codeshares on service from Denver to Williston with small turboprop operator Great Lakes Aviation, which operates 30-seat Embraer Brasilia turboprops on the pairing. Great Lakes also partners with Denver-based Frontier Airlines on service between Denver and Williston.

Williston was already enjoying a steady increase in traffic driven by the oil exploration industry prior to Delta and United introducing their respective service from Minneapolis and Denver. North Dakota’s representative in the US Senate, John Hoeven, estimates that boardings at Williston Sloulin Field International Airport jumped roughly 119% between Aug-2010 and Aug-2012. The accelerated activity at the airport has resulted in an evaluation by Williston city officials of potentially constructing a new airport or expanding existing facilities at Sloulin Field to support the increase in air traffic.

Dickinson, roughly 166km southeast of Williston, has also recorded dramatic growth as its boardings jumped roughly 380% from 5,000 in 2011 to 24,000 in 2012. A USD1.3 million terminal expansion project was completed at Dickinson airport in late 2011 to accommodate 50 individuals within the waiting area and 50 passengers in the sterile waiting area (beyond the security checkpoint). Other upgrades introduced at the time included updating baggage claim and new LCD displays throughout the terminal.

Once Delta and United each introduce two daily flights to Dickinson from Minneapolis and Denver in Jun-2013, they will add roughly 1,400 one-way weekly seats to Dickinson. Mr Hoeven in Feb-2013 issued statements regarding Delta and United’s new service to Dickinson being operated by SkyWest Inc subsidiaries SkyWest Airlines and ExpressJet, respectively. United also partners with Great Lakes on its Brasilia service between Denver and Dickinson. But Dickinson will achieve a major milestone in Jun-2013 after Delta debuts its service from Minneapolis, which will allow the airport to service to another US major airline hub.

Prior to the service additions from Delta and United, capacity growth in North Dakota was already outpacing the US average. Data from the North Dakota Aeronautics Commission show that from Apr-2011 to Apr-2012 weekly seat capacity at the state's airports grew 12% while overall US capacity fell roughly 1%. During that time seating capacity increased 48% to Williston and 8% to Dickinson, which was prior to United introducing flights in Nov-2012 to Williston and their planned service introduction to Dickinson.

North Dakota airport change in weekly seating capacity versus US average: May-2011 to Apr-2012 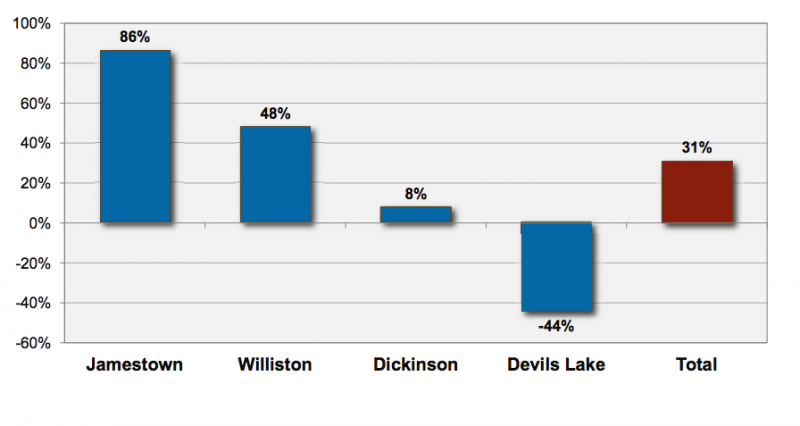 Based on projections from online tracker Sperling’s Best Places, Delta and United stand to fare well on their new service to North Dakota. Statistics for Jun-2012 show that Dickinson’s unemployment rate was 1.7% compared to an average of 8.6% for the US. Recent job growth – the percentage increase or decrease in available jobs over the 12 months ending Jun-2012 – was 10% compared to a US average of 0.35%.

For Williston, the unemployment rate was roughly 1% for Jun-2012, while recent job growth was 32%.

The new service to North Dakota is relatively low risk for both Delta and United, and perhaps a somewhat viable region to operate less-than-desirable 50-seat aircraft. Passengers might appreciate travelling on slightly larger jets versus 30-seat turboprop flown by Great Lakes. Delta is in the midst of significantly reducing its 50-seat jet fleet, including more than 60 aircraft operated by SkyWest as the regional carrier prepares to add larger-gauge jets. It is quite plausible that the 50-seaters SkyWest is operating to Williston and Dickinson are aircraft already pegged to exit Delta’s operations, so if the flights fail to meet Delta’s expectations, the carrier is likely carrying little risk on the aircraft used in those services.

Delta through its new ownership of the Trainer refinery has a deeper interest in North Dakota’s energy industry. Around the time Delta revealed its acquisition of the Trainer facility, the carrier indicated that sourcing cheaper crude at the facility could generate greater annual fuel savings than its originally projected USD300 million. Many US east coast refineries have largely imported Brent crude from the North Sea, which is priced higher than crude sourced from Bakken.

“Super storm” Sandy which struck the US east coast in Oct-2012 hampered production at Trainer shortly after operations restarted at the facility in Sep-2012. As a result Delta recorded a USD63 million loss from Trainer’s operations during 4Q2012 instead of meeting its original target of posting cost savings from Trainer, which is expected to supply Delta with about 80% of its domestic jet fuel supply in 2013.

Trainer accepted its first shipment of Bakken from North Dakota in Feb-2013. During an investor discussion in Jan-2013 Delta CFO Paul Jacobson explained that Trainer has a multi-year agreement with BP for crude sourcing. He explained it was too early to determine the success of using Bakken as a high-volume source of crude, “but as we run this first shipment this quarter [1Q2013] we’ll have more color to what the total potential is, but it’s pretty significant”.

As previously noted by Delta, its USD300 million investment in Trainer is just a small fraction of what some US carriers are spending on fleet renewal. If the refinery’s performance fails to miss Delta’s initial financial projections, an argument could be made the acquisition is still less risky than committing to long-term financing of aircraft that could prove to be costly in the wildly cyclical airline business.

Whatever the outcome of Delta’s refinery experiment, the carrier, along with its main US legacy competitor United, can at least benefit in the short-term from the rapidly rising air travel demand triggered by North Dakota’s energy boom. Over the long-term the fuel used to operate those flights could return full circle to its origin.