Delta Air Lines continues to beat the protectionist drum against the emerging Gulf carriers even as Etihad is reportedly examining a stake in Delta’s fellow SkyTeam member Alitalia.

Beleaguered Alitalia in some ways is at the centre of Delta’s latest in a series of strenuous efforts to stymie expansion by Gulf carriers as it challenges Emirates’ new Milan-New York service in the Italian courts. The stakes for Delta are much higher than a single flight. The carrier appears willing to use litigation to stop Emirates from further expanding on fifth freedom rights to serve points in North America from Western Europe as the region represents roughly one quarter of Delta’s international seat deployment.

Delta is reverting to tactics from a bygone era as the global aviation business continues to change rapidly. The Gulf carriers are a major component of the changes under way and as much as Delta aims to thwart their expansion, the reality is Delta will continue to face new competition from those carriers at every turn. Like some of its long established partners, such as Air France, which went from arch-enemy to ally with Etihad, Delta may just have to coordinate more closely with those airlines if Etihad succeeds in becoming a major stakeholder in Alitalia.

Emirates launched service from Milan Malpensa to JFK in Oct-2013, stopping in Milan from Dubai to pick up new passengers in Italy. Emirates utilised fifth freedom rights to introduce the service, and now holds an approximate 34% seat share on the pairing. 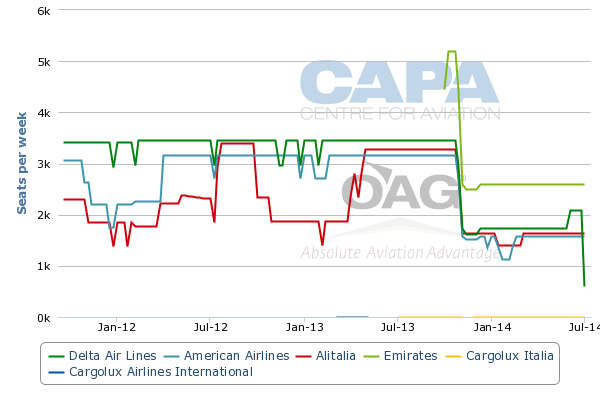 At the time Emirates decided to introduce the service, carrier President Tim Clark explained the airline determined that New York-Milan (which is also served by United from its Newark hub), was underserved, especially in the premium travel segment. At the beginning of Sep-2013, the 30 day moving average business class fare between Milan and JFK was nearly USD6,300. On 2-Jan-2014 the average was USD3,157. Some of the drop is likely due to the onset of the lower-demand shoulder season in September, but Emirates’ entry into the market also likely drove lower fares.

Fielding questions from investors about competing with the Gulf carriers on a connecting basis, Delta vice president of revenue Glen Hauenstein in discussing the competitive situation in Milan remarked that in the early stages of Emirates' new service, it was “hampered a little bit here because of the current condition of our partner Alitalia...so for the Italian origin traffic coming to New York, it was fertile ground”.

Mr Hauenstein remarked that initially “they had some very good bookings, and what we traced that back to was that Alitalia’s commission programme was paying in arrears”. Given those circumstances, Italian brokers were opting to book with Emirates “because they were paying up front”, he explained.

Even though Emirates opted to use fifth freedoms for service on a Dubai-Hamburg-JFK routing that ended in 2008, Mr Hauenstein concluded Emirates' new Milan-JFK service is “kind of ground zero on fifth freedoms, and we have to stay vigilant to get fair skies, not open skies”. "Fair" has typically been the word used by airlines and their governments to protect the flag carrier from open market competition.

For Delta the crux of its challenge to Emirates’ new service in the Italian courts is its contention that Emirates has exploited local laws, which only allowed two sections per week, Mr Hauenstein explained. “That’s what we’re fighting in court, that they’re flying daily.”

But for Delta the issue is about more than just one route. If Emirates executes its Dubai-Milan-JFK routing successfully, more fifth freedom routes could be in the offing. The carrier has already mentioned a Copenhagen-Seattle pairing as a possibility, which Delta has likely taken notice of now that Seattle is the carrier’s west coast gateway to Asia. There is no direct service from Copenhagen to Seattle, but Emirates likely sees an opportunity for pick up traffic in Copenhagen, whose major carrier SAS recently returned to profitability, but which also faces its own set of competitive challenges.

In the larger picture, Delta likely sees its valuable traffic flows under threat from Emirates and the rest of the Gulf carriers that have crafted their own respective strategies in serving North America. Emirates’ threat is on more than one front, as the expansion of direct flights continues with new service to Boston later in 2014 and its fifth freedom experiment in Milan.

Any traffic Emirates siphons from Western Europe matters, as the region remains the largest for travel from the US in terms of seat deployment, representing nearly 23% for the week of 30-Dec-2013 to 5-Jan-2014. Western Europe presently accounts for nearly 25% of Delta’s international seat deployment, so obviously it takes any perceived encroachment seriously. 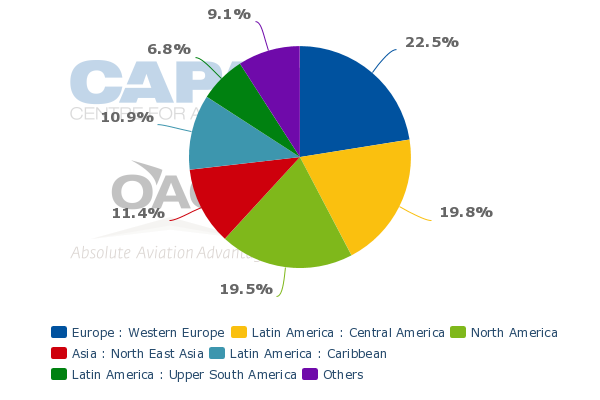 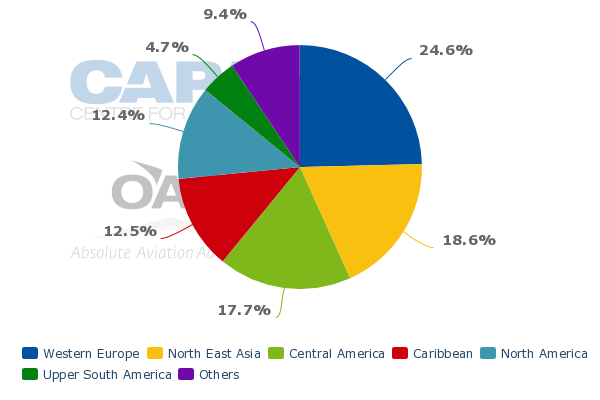 As Delta counters that Emirates has overstepped its bounds with the fifth freedom service through Milan, Emirates is in reality doing no more than engaging in competition, while it seems Delta is opting to wrangle through the courts to oust Emirates rather than competing with the carrier head-on.

The outcome of Delta’s legal challenge is not clear, but its actions and rhetoric show that it has no immediate plans to embrace the Gulf carriers, seemingly ignoring the recent milestone developments that have transpired between Gulf airlines and major global network carriers – the partnership between Qantas and Emirates, Qatar’s ascension into oneworld and the new relationship between SkyTeam anchor member Air France and Etihad.

See related report: Emirates and Qantas to codeshare in first alliance shake-up of season; next Qatar into oneworld

Delta often touts its competitive revenue advantage relative to its US peers. But any such differential disappears once it compares itself to other global airlines, and the Gulf carriers in particular, whose in-flight products are immeasurably better. Delta and (some) other US carriers often contend the Gulf airlines are propped up by their respective governments, but the reality remains that those airlines continue to expand rapidly, and North America is a region where Emirates, Etihad and Qatar are expanding aggressively. Emirates for one has delivered massive annual financial dividends to its government in recent years, implying at worst that any supposed subsidy from that government is more illusory than real.

By the end of 2014, all three airlines will serve six of the top 10 US markets in terms of system arrivals – Chicago (Qatar and Etihad), Los Angeles (Emirates and Etihad), New York (all three carriers), Dallas (all three carriers), Houston (Qatar and Emirates) and San Francisco (Emirates). In addition to introducing flights to Dallas, Qatar is also launching service to oneworld hubs in Philadelphia and Miami, and Emirates is adding Boston to its roster of US services that also includes Seattle and Washington Dulles (which is served by all three Gulf carriers). 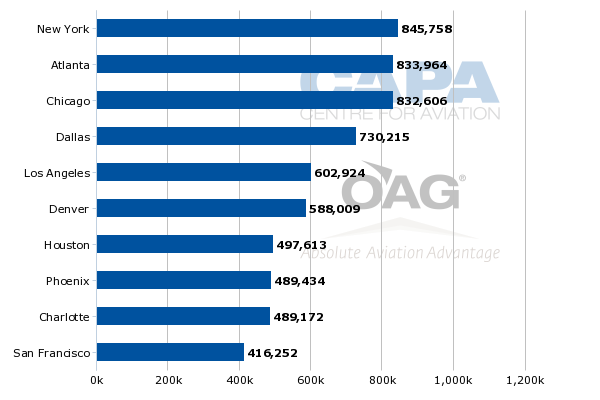 While the CEO of the new American Doug Parker recently told the Associated Press that the Gulf carriers represented a global threat, American’s strategic partnerships with Etihad and Qatar Airways will remain intact as those carriers are providing key feed to American’s Latin American markets, helping to maintain its stature as the leading carrier between the US and Latin America.

Even though Mr Parker may feel under some pressure to echo other US network carriers in citing a competitive imbalance with respect to the Gulf carriers, the reality is those airlines are funnelling connecting passengers through American’s hubs that are key to American maintaining healthy competition with Delta and United. In one way or another, similar arguments have found success with most other former opponents of the Gulf carriers' expansion.

For Delta, staying stuck in old ways of thinking could quickly become detrimental

For the moment Delta seems satisfied in avoiding the strategic relationships the Gulf carriers have forged with global airlines that until recently gave Emirates, Etihad and Qatar the cold shoulder. It has remained silent on Air France-KLM’s commercial tie-up with Etihad and Aer Berlin, and faces the possibility that Etihad will become a major investor in Alitalia after Air France declined to inject more capital into Italy’s ailing flag carrier.

Heading into 2014, it appears Delta – despite being the world's largest airline, mostly thanks to its domestic boundaries – remains on a course of protectionism rather than engaging in competition. The difference now than even five years ago is that the Gulf carriers are crafting their own highly competitive global networks through tie-ups with Delta’s partners and other major carriers that have opted to embrace the improvements in competitive connectivity offered through tie-ups with Emirates, Etihad and Qatar.

If Delta continues on its current course, the competitive advantage it continually touts over its domestic peers will slowly erode. As each of the Gulf carriers had demonstrated, their growth during the next decade is unrelenting as the Middle East emerges as a focal connecting point for passengers. Carriers who cling hard to old beliefs could find themselves at a significant competitive disadvantage much faster than they expect.