Delta Air Lines has slightly adjusted its passenger unit revenue targets for 3Q2014 triggered by oversupply in some of its markets, unrest in the Middle East and the Ebola outbreak in Africa.

The airline has previously warned of tougher year-on-year comparisons in 3Q2014 after recording 7% unit revenue growth in 3Q2013. But despite the challenges that have cropped up during the last few months, Delta still predicts a strong performance in the quarter with double digit operating margin expansion and solid cost containment as demand in the US domestic market remains strong.

As it prepares to make trans-Atlantic capacity adjustments for the US winter time period in conjunction with its SkyTeam alliance partners, Delta is also making changes in it Pacific network by down-gauging Boeing 747s it operates to Tokyo and replacing them with smaller and more efficient aircraft.

Some of American’s decline is driven by its larger exposure to Venezuela and the redeploying of capacity it has cut from the US to Venezuela as funds owed to the airline remain frozen in the country. But similar to Delta, American has cited an oversupply in the trans-Atlantic, and has opted to cut its capacity in the US trans-Atlantic market by 3% during 2H2014, resulting in a 2% capacity increase for CY2015.

Delta and its joint venture partners Air France-KLM and Alitalia have opted to reduce the joint capacity in the trans-Atlantic during the winter time period by 1% to 3%. However, Delta’s other trans-Atlantic joint venture partner Virgin Atlantic is expanding service between the US and Europe in 2015 through the addition of new flights from Delta’s Detroit hub to London Heathrow and operating one of Delta’s three daily flights from Atlanta to Heathrow, and also assuming Delta’s Atlanta-Manchester route. Virgin Atlantic is also bolstering service from London to New York JFK and Los Angeles, which has raised some concern at American that other airlines are backfilling supply it has trimmed.

Data from CAPA and OAG show for the week of 29-Sep-2014 Delta has a 14% seat share between the US and Western Europe, and its seat capacity is up 7% year-on-year. Virgin Atlantic represents a 6% seat share, but its seat counts are down 3% year-on-year. 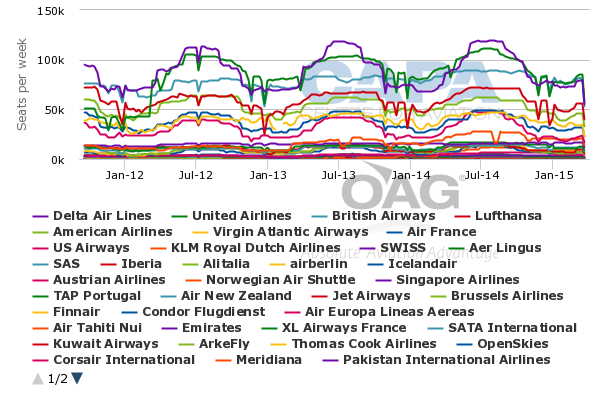 American represents an 8% seat share in the trans-Atlantic (for the week of 29-Sep-2014), but its seats on offer have fallen 2% from the year prior. United, which represents a 14% seat share between the US and Western Europe, has a relatively flat seat offering and US Airways’ seat capacity is up 1%. It accounts for 5% of the seats on offer in the market. Overall, seat capacity between the US and Western Europe is up nearly 7% year-on-year for the week of 29-Sep-2014.

Delta sees strength in Latin America outside of Venezuela

Overall Delta believes that Latin America remains on solid footing, evidenced by its 3% increase in seats on offer between the US and upper South America for the week of 29-Sep-2014. Delta represents an overall 11% seat share in the market. American, the market leader with a 30% seat share, has cut its seats on offer by 11% year-on-year (largely due to a pull down in Venezuela operations). US Airways’ seats are down 82% after it cut service from Charlotte to Sao Paulo. 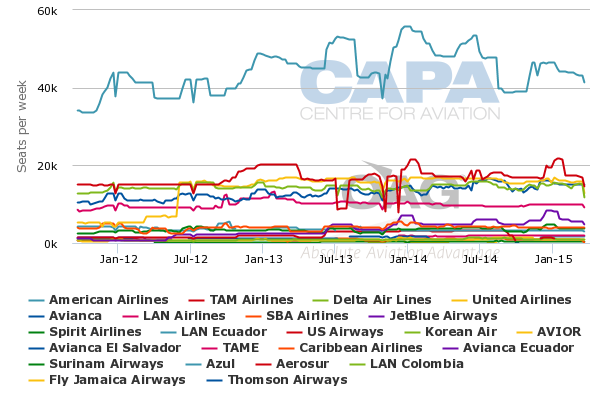 Delta is also seeing some pressure from its cuts from the US to Venezuela after it cut its daily Atlanta-Caracas service to once weekly, and has warned the pull-down would affect its Latin unit revenues in 3Q2014 by 3-4 points. So despite the relative strength it sees elsewhere in the region, the airline’s unit revenues in Latin America are likely to be pressured year-on-year during the quarter.

Delta believes down-gauging should improve its fortunes in the Pacific

Delta is making some changes in the Pacific as it has cut four Boeing 747s from its fleet. The airline recently concluded the 747 was a “tough airplane” with a large gauge in a region with overcapacity. Delta in Oct-2014 is down-gauging flights from Tokyo Narita to Atlanta, Los Angeles and Seattle from 747s to 777s and replacing the 747s operated from Narita to Taipei with Airbus A330s.

The airline believes by decreasing aircraft gauge in the Pacific, it can make its overall capacity in the region more efficient. “With that reallocation and with that right-sizing, we expect material improvements in the Pacific in the coming years,” Delta CFO Paul Jacobson recently concluded. During 2Q2014 Delta’s unit revenues in the Pacific dropped 3%, driving a 2% fall in yields on flat capacity growth.

Delta is opting to cease its service from Seattle to Tokyo Haneda (closer to the city centre than Narita) for the winter 2014/2015 timeframe. It opted to transfer the Haneda slot from Detroit to Seattle in 2013, but the slot times at Haneda are unfavourable.

American Airlines made similar moves in late 2013 when it ended service from Haneda to JFK due to unfavourable timing, saying it was a challenge to achieve profitability on the route. Delta aims to end its Seattle-Haneda service in Oct-2014 and resume the flight in Mar-2015. But it is uncertain if it can achieve profitability with the less-than-ideal slot times as connecting passengers likely find long wait times in Seattle undesirable. 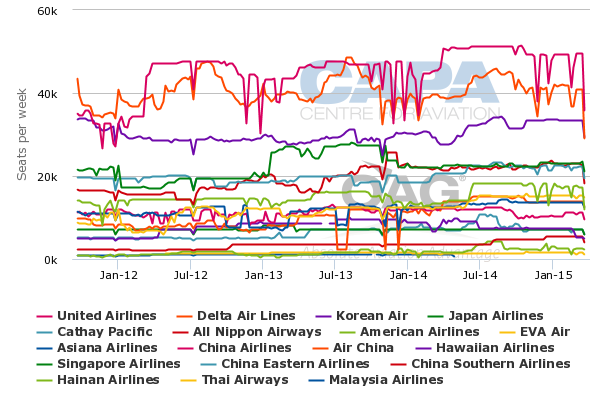 Both Delta and American believe US domestic demand remains strong, and perhaps the strength of the US market could help offset some weakness in the trans-Atlantic and other geographies.

Despite the slight revision to its passenger unit revenue guidance, Delta stresses its revised forecast is still within the original range, and that it is on track to generate USD4 billion in pre-tax income for CY2014. It estimates unit cost excluding fuel will be flat to up 1% on 3% capacity growth.

Delta reasons that it has transitioned its business to withstand the inevitable jolts created by the outbreak of disease or geopolitical shocks that materialise in various regions. It could face more headwinds now that a case of Ebola has been diagnosed in the US, and airlines are fielding questions about how they combat the spread of disease.

Overall trends seem solid for 3Q2014 even if comparisons are tougher year-on-year. Obviously it would be more positive to see a higher passenger unit revenue forecast, but some of the fallout is from Venezuela, which should be a short-term challenge rather than creating lasting revenue headwinds.

Overcapacity in the trans-Atlantic and Pacific may continue to linger into 2015. But with capacity discipline remaining the ultimate mantra of Delta and its peers, they will need to stick to their pledges of maintaining a rational supply-demand balance to ensure their declarations of a transformed industry remain intact.