Delta Air Lines plans to do what mainline carriers have never done – consistently achieve a 10-12% margin and a decent return on investment, according to CEO Richard Anderson, who spoke to analysts at Delta’s investment day yesterday.

While that is an easy mark for regional airlines and also attainable by low cost carriers, legacy carriers have rarely achieved such margins – even before deregulation when airline executives consistently complained that all they could hope for in really good years is a 5% margin. For regionals, the company is “seeking better leverage on regional contracts,” said President Ed Bastion, which will likely make it much more difficult for US regionals to maintain their margins.

Anderson indicated that the merger with Northwest brought with it new board members who were impatient to achieve margins that reflected other industries. Thus, he said, by 2012, Delta will be there.

“The airline industry is evolving,” he said, “and we have been aggressive and creative to get to that evolved state. The merger was a bold step. The evolution is underway around the world and consolidation will help with that evolution. This business has to get to a return on capital and we don’t think at this point acquiring more aircraft is a good expenditure. Instead, we will be getting the balance sheet less leveraged.” 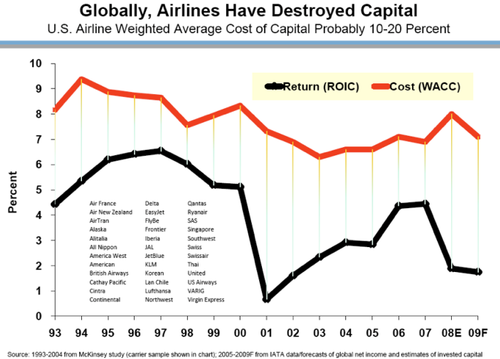 Anderson noted the merger activity in Europe and elsewhere, but also pointed to international alliances as the closest thing to a merger. “The Air France-KLM alliance will be metal agnostic and is, in essence, a cross border consolidation,” he said. “It will allow us to operate as a single entity on pricing, distribution and capacity.” He said one of the biggest achievements this year was to get the US Air Transport Association to go on record as supporting all global alliances, something it has avoided doing in the past.

He indicated that the Delta/Northwest merger proved airlines could be successful in doing a merger on a fairly rapid basis. While suggestions have been made on a Continental/United merger there seemed little appetite over the past year as United restructured to avoid another run at bankruptcy. It remains to be seen whether the Wall Street analysts will gain any appetite for such maneuvers in 2010.

President Ed Bastion echoed Anderson’s promise to gain a “sustained, low-double-digit operating margin” and to get there, the company would do little else but invest in the balance sheet and improve the customer experience, especially premium travelers. Having refinanced or paid down debt with the financing accomplished this year, the airline will continue on that path in 2010. “This will make a difference to break the model and provide a sustainable profit model,” said President Ed Bastion.

Bastion told analysts that the company was projected a full-year net loss in the USD1.1 billion range brought about by significant fuel hedge losses. “If we didn’t have that we would be generating a positive operating margin of 5.4%,” he said. “If you put everyone at the same fuel level, and measured the core business over the last nine months, Delta’s operating margin is substantially higher than anyone else’s and our EBITDAR is almost twice that of our nearest competitor.” 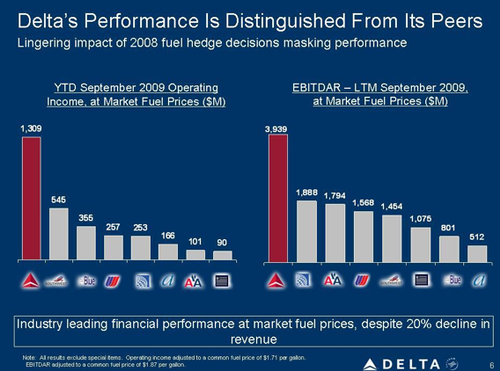 Both Anderson and Bastion seemed to be saying that since 2007 their focus has shifted dramatically away from chasing market share at any cost to increasing market share of premium travelers. Indeed, in the last few months, that is exactly what most carriers have been saying meaning the competition will be the most intense around that segment including from low cost carriers which have to invade the premium space if they are to achieve sustainable growth.

“Commercial initiatives will be focused on improving network and product to drive a revenue premium,” said Bastion. 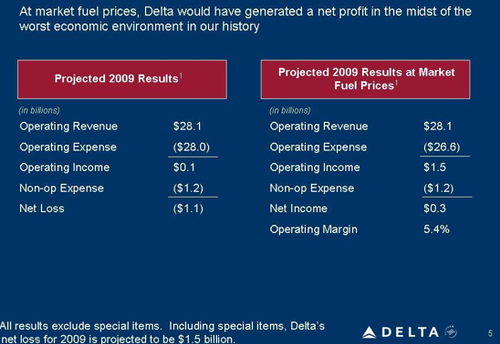 Having reached the bottom of the revenue decline in June, Delta’s revenue this month will be down only 1% from the year-ago period. Passenger revenue per available seat mile (PRASM) has achieved a 16% sequential improvement. 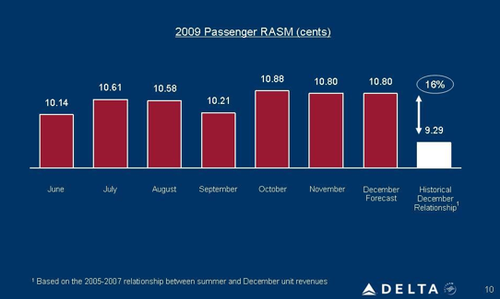 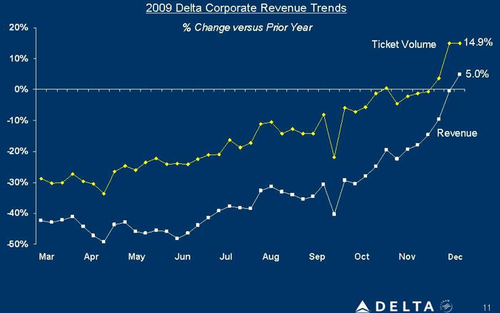 In the December quarter, Bastion reported the operating margin, ex special items was between 1% and 2%, while total liquidity is expected to be USD5.3 billion. However, consolidated passenger revenue is down 5% to 6%. The fourth quarter trends, he added, translates into a baseline revenue momentum in the 7% range. Delta’s numbers are based on a recovery in GDP in the 2% range.

Delta will retain its capacity discipline with flat capacity next year which will result in a 7% reduction from 2007. The company will get the biggest boost when it gets its single operating certificate this month which will unlock further merger synergies.

While the company is on track to deliver USD400 million in revenue increases and USD300 million in cost savings from merger synergies in 2009, it expects to deliver another USD600 million next year. The USD350 million in revenue synergies will be done by expanding wide body fleet movements in international markets, implementing domestic fleet reallocation with the A320s and MD90s, improving revenue management technology and implementation of the first fully coordinated schedule in the Air France/KLM alliance.

Bastion said the company had a five-point strategy involving reallocating the fleet, becoming the global airline of choice in New York, optimizing its Pacific network, creating a differentiated product for its best customers and diversifying revenue streams with ancillary revenues.

Focus on De-levering the Balance Sheet 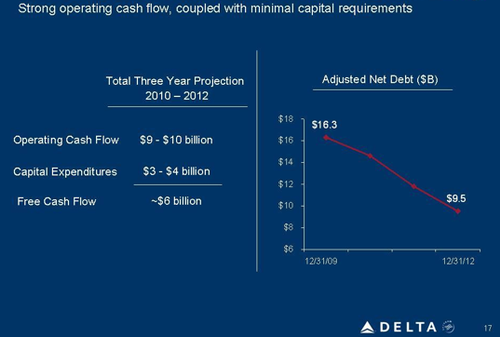 While it is pleased with its progress during tough economic headwinds, the company still has work to do, said Bastion. That includes getting to a 10-12% operating margin, further minimizing capital reinvestment requirements, achieving USD2.5 million to USD3 billion operating cash flow, and continued de-levering the balance sheet. “Once that is accomplished, we will delivery a 10% return on invested capital,” he said.