Few would challenge the conclusion that Delta has one of the soundest balance sheets among US airlines. Its reductions in adjusted net debt and leverage ratios garnered their just rewards in 2016 when the company secured coveted investment-grade rating from Fitch and Moody’s.

During the time Delta has significantly improved its balance sheet metrics it has also steadily increased its shareholder rewards, and has reiterated its commitment to increasing dividends. The airline's position is that continuing to drive the importance of its dividend performance is a key component of the company’s valuation proposition.

Similarly to many other US airlines, Delta is facing unit cost inflation in 2017; but the company’s unit costs growth for the year should fall below 2016 levels. Those costs are inflated due to a new pilot contract that joins a number of new contracts that US airlines inked in 2016, which are resetting industry pay scales.

Unlike its large US global network airline peers American and United, for the past few years Delta has been on a march to strengthen its balance sheet in order to gain coveted investment-grade status. The only other North American airlines that have attained an investment-grade endorsement are Southwest, Alaska Air Group and WestJet.

Delta won an investment-grade credit rating from both Fitch and Moody’s in 2016. The blessing by those agencies was the reward for years of work by Delta to reduce its debt and leverage. In 2009 its adjusted net debt was USD17 billion, and its annual cash interest expense was USD1.3 billion.

Since that time Delta has paid down USD11 billion in debt, and has a targeted adjusted net debt of USD4 billion by 2020. Its debt to EBITDAR was 8.2x in 2009, falling to 0.8x in 2016. The value of Delta’s unencumbered assets during that period has grown from USD430 million to USD6 billion.

Delta’s efforts at balance sheet repair have allowed the airline to begin contemplating meaningful shareholder returns, beginning in 2013. Between 2013 and 2016 Delta increased its annual dividend from USD100 million to USD615 million, and share buy-backs during that period increased from USD250 million to USD2.6 billion. The company expects to complete its current USD5 billion by mid-2017.

Delta has committed to further increases in its dividend as a means to drive its overall market valuation. Delta’s rival United has yet to pay dividends since the merger between United and Continental in 2010, and its share repurchases have been much lower than those of its two large global US rivals.

Since the merger between American and US Airways in 2013 American estimates its dividend payments between 2013 and 2017 to total USD541 million, and it expects to complete USD7.3 billion in share buy-backs during that period. But near the end of 2016 United’s USD75.72 share price was trading at a significant premium to American’s USD49.47 and Delta’s USD50.92.

Delta has also concluded that it is not starving the business in order to shore up its balance sheet. But the company stresses that its investments have been completed in a measured manner. Its consistent message during the past two years has been that capital expenditure will not exceed 50% of its operating cash flow, which is markedly lower than percentages posted by its large US industry peers – United, Southwest and American. 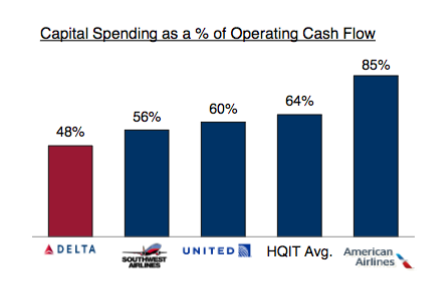 Some of Delta’s investments for 2017 include USD700 million to take a 49% stake in Aeromexico, and a USD450 million investment in technology. The airline is also in the process of replacing 30% of its mainline fleet between 2016 and 2020.

CAPA’s fleet database shows that Delta has 264 aircraft on order, against an active fleet of 843. Delta has one of the oldest fleets in the world, at an average age of 17.2 years.

Source: CAPA Fleet Database.
Orders include those placed directly by the operator and by lessors assigned to the operator, from 22-Dec-2016 onwards.

Delta pledges that its long term cost targets are sustainable, despite short-term pressure

Nearly every US airline is facing some level of cost inflation in 2016 and 2017, largely driven by employee pay rate resets. A new pilot agreement at Delta that entails a 30% pay increase over a four-year period is driving its projected unit cost increase of 3.5% for 2016. 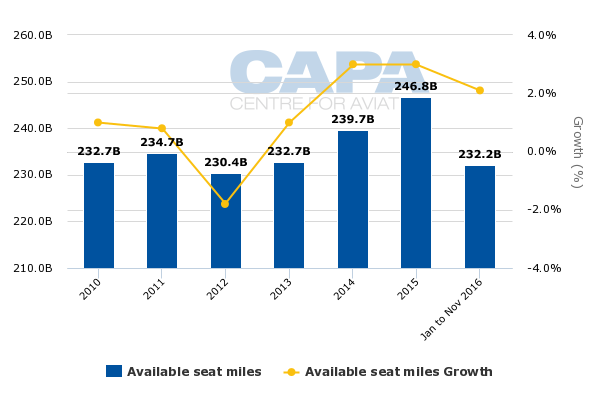 Delta continues to stress that it is equipped to meet the long-term cost targets it has established for itself, listing a raft of initiatives to drive down its costs. The airline estimates that in 2017 it will produce USD1.5 billion of productivity savings, which Delta highlights is consistent with the average of USD1.2 billion to USD1.3 billion savings it has posted annually during the past few years.

The company is also still engaged in an aircraft upgauging programme to reduce its reliance on smaller aircraft, particularly 50-seat jets. Delta estimates the average seats on its narrowbody departures should increase by 5% between 2016 and 2018. It is also touting the benefits of replacing older widebodies with newer Airbus A330neos and A350 twin-aisle jets. Based on fuel of USD1.59 per gallon and a 5,500 mile trip, Delta estimates that the seat cost of a 747 is USD420, versus USD408 for the Airbus jets.

Delta also believes the investments it has made in operational reliability ultimately drive cost efficiency. Since 2010 Delta estimates mainline maintenance cancellations have decreased 98%, and its maintenance costs are 15% below the US industry average, even with a higher average fleet age than its rivals American and United.

Another area where US airlines face cost pressure in 2017 is oil expense. The airline has stated that Brent crude prices per barrel were USD54 in 2015 and USD45 in 2016, after reaching USD102 in 2014. Delta understands that market prices for fuel in 2017 are projected to increase by 30% year-on-year to USD60 per barrel, which will drive USD1.2 billion in incremental costs for the company.

The airline has no open hedge positions and will incur USD300 million in losses during 2017 from previously closed positions.

The company believes its refleeting efforts should help mitigate the inevitable increase in fuel costs it could experience during the next couple of years. In fact it has achieved a 1.5% decrease in annual fuel consumption, and estimates the new aircraft entering its fleet are 20% to 25% more efficient than older jets being retired.

But Delta’s average fleet age of 17 years (according to CAPA’s fleet database) versus 10 for American and 14 for United means that its rivals can presumably deliver a higher level of fuel (and cost) efficiency with younger fleets, but there could be a trade-off in ownership, expense given their lower average fleet ages.

Delta acknowledges that work to prove the sustainability of its balance sheet strength continues. But the airline deserves a certain level of recognition for the significant progress it has made in debt and leverage reduction.

At the same time Delta continues work to sustain and grow its shareholder rewards, recognising the need to allocate some of its cash flows to ensuring owner satisfaction.

The airline also deserves credit for acknowledging that sustaining and ensuring further improvement to its balance sheet is an ongoing process, with no clear-cut final goal. Delta rightfully concludes that complacency is not an option in its continual efforts to prove that the positive changes in its business model are permanent.