North and South American carriers’ stocks rose for another day on Tuesday (15-Jun-2010), boosted by positive outlooks from US airline executives during the day and gains in wider markets. The Dow (+2.1%) rose on a rising energy sector and improved hopes for global economic recovery.

Also during trading, Jesup & Lamont analyst, Helane Becker, reiterated the company’s "buy" rating of Delta’s common shares, with a price target of USD20, or 10 times estimated 2010 earnings per share (EPS) of USD1.99, which is an increase from its prior estimate of USD1.93. Ms Becker also increased the company’s 2Q2010 EPS estimate from USD0.57 to USD0.62 and are using a 10.6% operating margin. Zacks meanwhile upgraded its rating of Delta’s shares from "neutral" to "outperform", based on improved economic conditions and revenue trends.

US Airways 'cautiously optimistic' for 2010

US Airways (+8.3%) was boosted by comments from President, Scott Kirby, who stated the carrier’s outlook for 2010 is “characterised by cautious optimism”. He added that the industry “appears to be turning a corner”, with the carrier seeing a “dramatic” recovery in business demand.

Continental Airlines (+4.0%), meanwhile, stated it expects USD1.0-1.2 billion p/a in synergies from its proposed merger with United Airlines (+3.6%), including revenue synergies of USD0.8-0.9 billion and net cost synergies of USD0.2-0.3 billion. 75% of synergies are expected to be achieved in the second year, with full run-rate expected in year three. The carrier also expects the combined network will add more than 2 million passengers p/a. 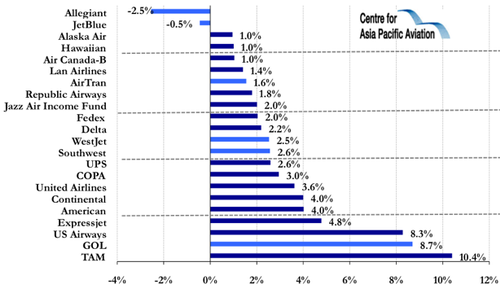