Delta Air Lines managed to continue its solid financial performance during 1Q2014 despite battling operational disruptions from a bevy of winter storms that plagued most US carriers during the first three months of 2014.

One of the most encouraging aspects of Delta’s quarterly performance was the carrier’s 16.4% return on invested capital for the trailing 12M, which exceeded the carrier’s stated goal of a consistent 15% annual return.

Despite some continuing challenges including the still-weak Yen and not achieving sustainable profitability at its Trainer refinery, the carrier believes demand is strong and expects passenger unit revenue growth to remain in the high single digits in 2Q2014.

Delta’s 1Q2014 net income was USD213 million including special items of of USD68 million. That compares with net income of USD206 million the year prior. Delta also recorded USD163 million in non-cash tax expense in 1Q2014 due to the reversal of the airline’s valuation allowance. On a pre-tax basis, Delta grew its first quarter income from USD332 million to USD335 million year-on-year.

The carrier’s top-line revenues grew 5% year-on-year in 1Q2014 to USD8.9 billion driven in part from an 8% increase in other revenues to USD1 billion. Delta estimated revenues from sales of Economy Comfort, preferred seating and first class upgrades grew 20% year-on-year to USD165 million. Delta’s top-line growth occurred as it lost USD90 million in revenue from 17,000 flight cancellations in Jan-2014 and Feb-2014. 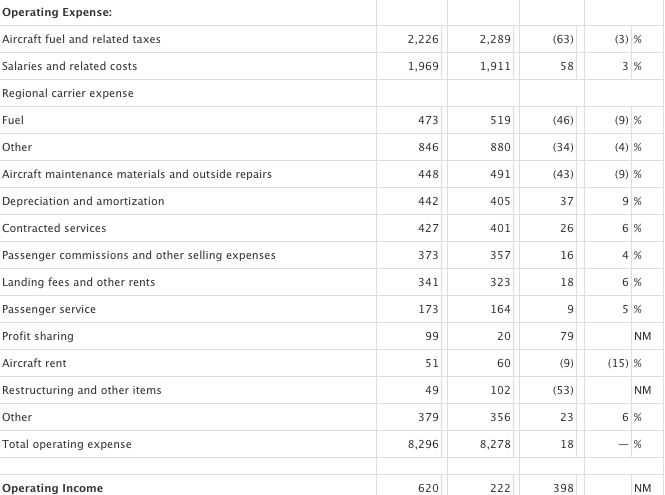 Delta’s domestic entity was its best performing region in 1Q2014

Carrier president Ed Bastian said Delta’s strong performance in US domestic markets was attributed to a 6% rise in corporate demand despite some challenges from the weather and a dip in that passenger segment in Jan-2014 and Feb-2014.

Mr Bastian noted that corporate revenues rebounded by roughly 8% in the last few weeks of the quarter. He also stated Delta posted a strong performance in its hub-to-hub flying during 1Q2014.

See related report: Delta Air Lines maintains its financial edge with a strong 4Q2013, but its peers are still not safe

International markets were not such good performers

In its Latin American markets, Delta’s unit revenues were essentially flat year-on-year as yield decreased 1.3% on an 18% capacity increase – the largest of any region. The carrier’s capacity growth was largely driven by expansion in Brazil and Mexico to improve connections onto flights operated by its partners Gol and Aeromexico. Delta also has equity stakes in each carrier.

Delta noted that China was a “bright spot” in its Pacific operations, with 15% unit revenue growth in those markets year-on-year during 1Q2014. Among the contributors to the positive performance in Delta’s Chinese markets was the re-timing of one of its Beijing slots to a more favourable peak time, the carrier explained. Delta serves Beijing from its Detroit and Seattle hubs.

Mr Bastian highlighted that Delta recorded high single digit revenue and growth year-on-year during 10Q2014 in both Seattle and Los Angeles, on double digit capacity growth. The carrier estimates that 65% of its traffic in Seattle currently connects to its long-haul markets, and is seeing increasing maturity on its long-haul flights to Seoul, Hong Kong and London. Delta also serves Amsterdam, Beijing (mentioned above), Shanghai and Tokyo Haneda and Narita from Seattle.

Delta estimated 17% capacity growth in is Seattle hub year-on-year in 1Q2014 as it added a slew of new domestic markets to feed its growing international network from the airport.

It is competing with its codeshare partner Alaska Airlines in all the markets and has opted to remove its code from several flights where it will be operating its own metal. During Jun-2014 Delta is axing codeshare service with Alaska from Seattle to Las Vegas, Los Angeles, San Diego, San Francisco, San Jose and Vancouver, to be followed by Anchorage and Houston in Jul-2014 and Seattle-Phoenix in Dec-2014.

Previously, Alaska has estimated that it will overlap with Delta in 13 city pairs from Seattle during the course of 2014, including nine of its top bases. Delta, meanwhile, boasted it would be Seattle’s largest carrier measured by revenue in 3Q2014.

Alaska and Delta overlapping markets from Seattle by YE2014 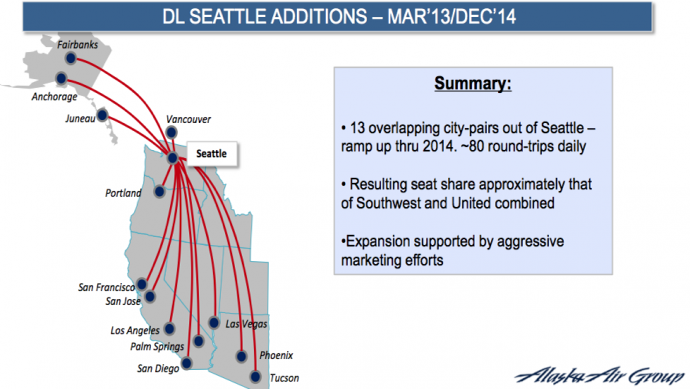 Delta did encounter some bumps in its financial performance in 1Q2014, including a USD41 million loss at its Trainer oil refinery after predicting a modest loss for 1Q at the end of 2013. Trainer’s losses during 4Q2013 were USD46 million. Delta explained that during 1Q2014 one of the facility’s refining units was taken off-line for scheduled modifications, which lowered throughput levels, and also noted the refinery’s performance was negatively hurt by an increase in Renewable Identification Numbers (RIN) expense.

RIN costs are part of compliance with the US Environmental Protection Agency’s renewable fuel standards, and previously Delta has cited RIN price volatility as a challenge in Trainer’s performance. In discussing its 2Q2013 operations at Trainer, Delta explained the refinery would have broken even absent higher RIN expense.

Delta assures it will turn a profit at its Trainer refiner in 2Q2014 and has previously predicted its refining business should generate a profit in 2014.

Delta CEO Richard Anderson painted a positive outlook for the carrier, noting that the demand environment remains strong and anticipating unit revenues would grow in the single digits in 2Q2014 on a 2% to 3% capacity increase.

The carrier estimates a 14% to 16% operating margin, which is roughy double its performance in that metric during 1Q2014. Its unit cost forecast for 2Q2014 is flat to 2% growth, which is in line with Delta’s overall goal of annual unit cost increases below 2%.

The carrier ended the quarter with USD5.6 billion in unrestricted liquidity and a 44% debt to capital ratio.

Despite the normal operational disruptions that are commonplace in the airline business (and an abnormally cold winter), Delta turned a solid performance in a typically weak quarter for the US industry.

Delta continues to deliver on the metrics it has laid out for itself and is beginning to create real shareholder returns. Although there are a few major outstanding domestic challenges, including whether to cut its losses with Trainer, Delta for now continues to set the standard for its US peers with no plans to stray from building a carrier to attain an investment-grade status. The achievements to date have been rewarded by a doubling of the airline's share price over the past twelve months, closing at USD32.52 on 23-Apr-2014.

Internationally - where the future market growth is biggest - Delta's fortunes are more mixed. A big capacity investment in Latin America is a necessary move, but comes with a cost in the short term. Elsewhere, a more cautious approach is being encouraged by a variety of more complex conditions.