Delta Air Lines: A220 delivers on performance and customer experience

It is early days for Delta Air Lines’ operation of its fleet of Airbus A220 narrowbodies, but so far the aircraft is meeting the airline’s expectations and the route network for the jet continues to expand beyond the initial deployment from New York JFK and LaGuardia.

Delta continues to believe that the aircraft offers a superior customer experience in the US domestic market while delivering much better economics than smaller regional jets the aircraft is replacing.

Until JetBlue takes delivery of its first aircraft in 2020, Delta has the distinction of being the only A220 operator in the US, which means that Delta’s strategy for the aircraft will continue to be closely scrutinised.

Delta touts the supreme customer experience of its Airbus A220 narrowbodies 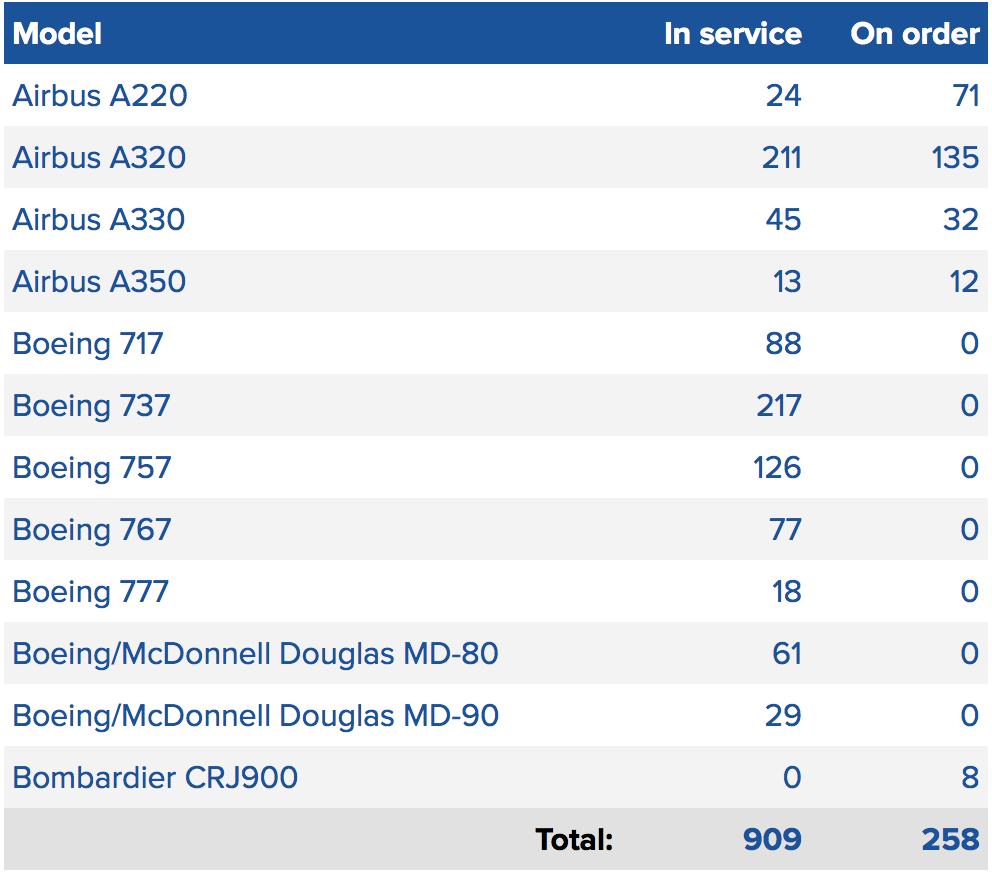 Shortly after Delta launched its A220 operations, company CEO Ed Bastian boasted that the aircraft would be the “nicest domestic product in the skies”, noting that the A220s had the widest seats in Delta’s domestic fleet and featured widebody windows on a narrowbody chassis, which gives customers a more spacious feeling.

Delta concludes that the A220 is meeting its performance targets

Previously, Delta calculated that the A220 features a 20% improvement in fuel burn per seat over a 76-seat CRJ700 and offers 12% more premium seats.

Delta’s president Glen Hauenstein has also highlighted that the cost of production for an A220 route actually drops once the aircraft replaces a smaller, less efficient jet.

Delta’s initial deployment of the A220 was on flights from its New York hubs to Dallas and Houston (hubs for American and United, respectively). Other routes include New York LaGuardia to Boston, Detroit to Dallas and Houston, and Minneapolis to Houston. The airline has also deployed the aircraft from its Salt Lake City hub.

According to CAPA’s sister publication AirlineRoute, numerous new markets are coming online in late 2019 and 2020, including Boston to Nashville; Seattle to Sacramento, Portland, San Francisco and Atlanta; Detroit to Austin; LaGuardia to Fort Myers and New Orleans; and JFK to Fort Myers, Tampa and  West Palm Beach.

At a route length of 1,896nm, Atlanta to Seattle will become one of the longest routes for Delta’s A220s, which in some ways reflects the versatility of the aircraft, having a range of 3,400nm.

The flights from Seattle to Portland and San Francisco are in line with Delta’s strategy to deploy the A220s on key US west coast markets. Data from CAPA and OAG show that at present Delta operates Embraer 175s and Airbus A319s on the Portland-Seattle route.

Delta is taking delivery of 90 A220s during the next four years after adding 15 jets to its order book in early 2019.

Mr Bastian remarked that after the airline's deployment of the aircraft on the US east and west coasts, the A220s would move into the US interior and eventually operate from the airline’s largest hub in Atlanta.

Some of that strategy is already unfolding as AirlineRoute has reported that in late 2019 Delta plans to deploy its A220-100s from its Salt Lake City hub to Seattle, Atlanta, Las Vegas, JFK, Orange County and San Francisco.

Mr Bastian believes the A220 is ushering in a new evolution in US domestic travel as airlines continue to upgauge from smaller regional jets.

He has said: “We’re not building new runways or slots. So you have to build bigger aircraft, but they also have to be nicer at the same time.”

JetBlue and the start-up Moxy are the only other US airlines that have ordered the A220.

Presumably JetBlue is using the same cost logic as Delta, and believes the A220 will drive major cost efficiency. The A220-300’s range also gives JetBlue the option to use a smaller gauge aircraft on some transcontinental routes that may not be viable for its larger A320 family aircraft.

Moxy’s business plan entails operating its aircraft to secondary markets, although The Los Angeles Times has reported that the airline could launch in 2020 with Embraer 195s from Azul before first deliveries of the A220-300s in 2021.

Moxy is the brainchild of serial airline entrepreneur David Neeleman, who was the founder of Azul and serves as the airline’s chairman. Azul is replacing its older Embraer 195s with Embraer E2 jets.

The A220 has undertaken numerous changes during the past few years – namely Airbus taking majority stake in the Bombardier CSeries programme and rebranding the aircraft as the A220.

Before that, Bombardier survived a trade dispute with Boeing in which the Seattle-based airframer claimed that Bombardier had engaged in price dumping and had benefitted from illegal subsidies.

As all those events unfolded, Delta never wavered in its support of the CSeries (now the A220). And although there is little doubt Delta got a favourable deal on the aircraft, it would no be the first time a major airline has received a good deal from an OEM. According to Delta, the A220 be delivering on its performance promises and now Delta can lean on one of the world’s leading airframers for customer support.