During the COVID-19 crisis Delta Air Lines has raised the equivalent of 19 months of liquidity, and believes it has manageable debt payments occurring over the course of the next year.

The airline is also still working to achieve its previously stated goal of reaching break-even daily cash burn by YE2020, but its daily cash burn will be flat in Jul-2020 compared with Jun-2020, as the rise in COVID-19 infections in the US is pressuring demand. Given the opaqueness of the demand environment, it appears unlikely Delta can drive its cash burn to zero by year-end.

Similarly to other airlines, Delta is holding discussions with it largest aircraft supplier, Airbus, about the future of its order book – the airline unsurprisingly has declared that it does not need any aircraft as hundreds of its jets remain grounded.

US airlines have raised massive amounts of liquidity since the onset of the COVID-19 pandemic. Delta ended 2Q2020 with USD15.7 billion in liquidity, and the company’s executives recently stated that the new liquidity it has raised (approximately USD15 billion) has a blended average rate of 5.5%.

Delta is giving assurances that its liquidity levels are more than enough to address its upcoming debt maturities, which include USD450 million due in Dec-2020 and a USD600 million unsecured loan due in Apr-2021. This is debt that Delta has raised during the COVID-19 crisis; “So we’ve already successfully refinanced that,” said Delta CFO Paul Jacobson.

Additionally, Delta has a USD3 billion bridge loan due in Mar-2021, which has collateral attached to it.

The airline has stressed that it has the ability to continue to raise additional capital, either through its own efforts or by leveraging unencumbered assets. Delta is also eligible for a USD4.6 billion CARES act loan from the US government.

The airline expects to maintain the same level of cash burn in Jul-2020 as in Jun-2020 as growth in demand has stalled.

During Jun-2020 Delta posted a steady increase in net sales while refunds were decreasing, and although the increase in sales has levelled off as infections rise, Mr Jacobson said that at this point – sales remain steady.

“So as we see the continued trajectory of reducing our operating expenses [by] 50% and keeping those net sales relatively flat, there’s where July [Jul-2020] comes out flat to June [Jun-2020]”, Mr Jacobson explained.

Delta reduced its total operating expense by 50% year-on-year in 2Q2020, and expects its costs to fall by the same amount in 3Q2020. The decline in costs is largely attributed to more than 40,000 employees that have taken voluntary, short term unpaid leaves, and crews that have reduced their hours. Approximately 17,000 of the airline’s employees have also voluntarily agreed to leave the company.

It will be tough to find more cost-cutting measures to get the airline's cash burn to zero by the end of 2020, and Delta CEO Ed Bastian has acknowledged that “it’s really going to be on the commercial side of the business, that’s going to be much more important to getting us down to that breakeven level [daily cash burn] as demand hopefully…starts to pick up again as we look into the late summer and fall”.

Overall, Delta continues to believe it could take two years or more before it benefits from a sustainable recovery, said Mr Bastian, given the combined effects of the pandemic and the associated impact on the global economy. And the airline expects its top line revenue in 3Q2020 to be a fraction of its levels a year ago – 20% to 25%.

As Delta works to attain its cash burn objectives, the airline is also engaging with Airbus regarding its order book with the airframer. CAPA’s fleet database shows that Delta has a total of 245 Airbus aircraft on order, and the manufacturer represents 98% of the airline’s total order book.

Delta Air Lines aircraft order book by manufacturer (percentage of aircraft on order), as of mid-Jul-2020 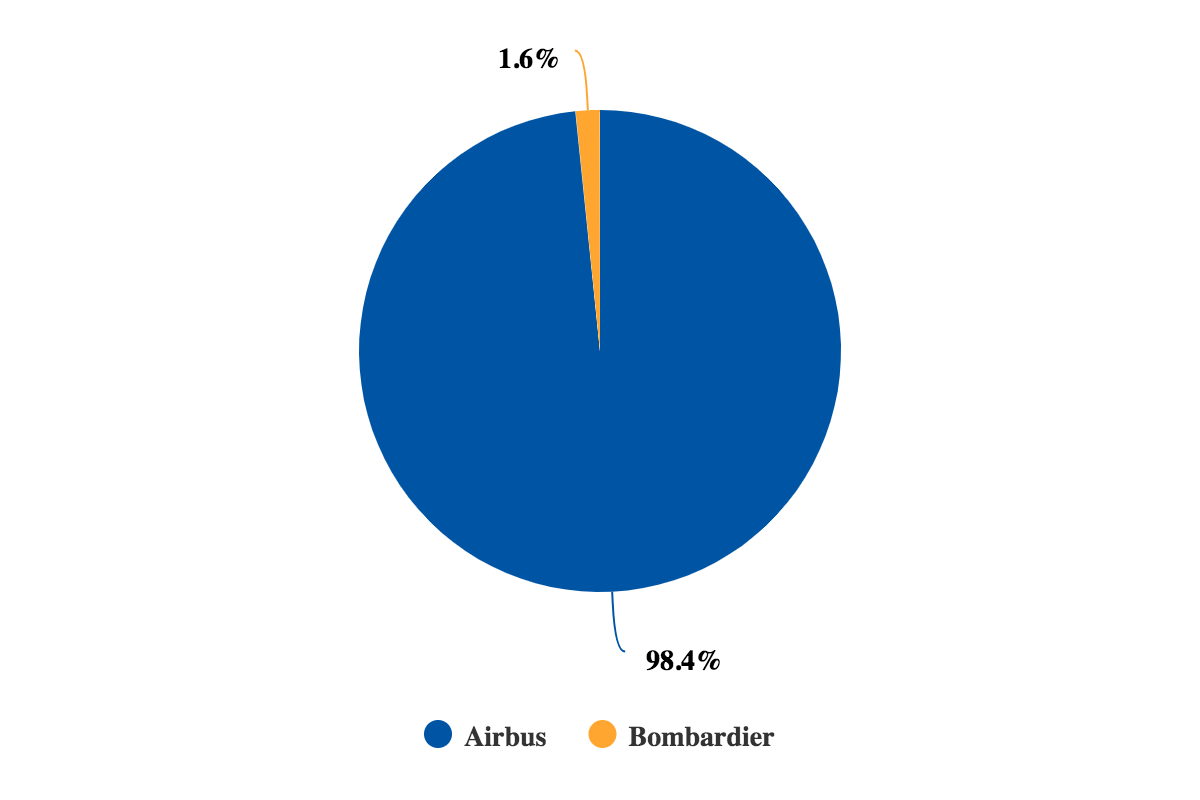 “Clearly, we are in a situation where we don’t need any aircraft,” Mr Bastian said. “We have a lot of aircraft on the ground, and doing our best through the next 18 to 24 months to minimise deliveries”, he stated.

According to CAPA’s fleet database, Delta has 597 aircraft in service and 781 inactive. The airline is also retiring 100 aircraft in 2020.

Mr Bastian explained that Delta was working with Airbus but nothing had been finalised. “I can assure you there will be no cash CapEx on any aircraft at Delta for some period of time”, he stressed.

Delta, like so many airlines, is navigating uncharted territory as it works to position the company to withstand the significant challenges stemming from the COVID-19 pandemic. And similarly to most US airlines, Delta is working feverishly to cut its cash burn down to zero so it can better withstand the crisis and manage its upcoming debt maturities.

But with near zero visibility on demand beyond the US high season, it could be tough for Delta and its US counterparts to reach their cash burn objectives.

With the autumn and winter seasons fast approaching, when cash flow is typically much more lean than in summer, airlines will necessarily be beginning to build medium term scenarios that do not rely on an early return of revenues and further reductions of cash burn.