With the launch of services to Hong Kong and Shanghai in Jun-2014, Dallas/Fort Worth (DFW) airport is nearing the completion of its Asian passenger service network coverage, which also includes Seoul and Tokyo. The last outstanding route for DFW is Beijing, and locally-based American Airlines has spoken of flying Dallas-Beijing in the near future once it receives suitable slots. DFW expects further Asian services – probably to secondary Chinese cities – to be realised in the long term.

DFW's attention now turns eastward. It would like to see a Turkish Airlines service from Istanbul, but does not expect the Star Alliance's Turkish to take up the route, given oneworld American Airlines' fortress size in Dallas. DFW has done well with Gulf network carriers, with all three offering services, including Emirates with the A380. Also on DFW's passenger wish list are services to Johannesburg, Rome and Zurich. But in the short term bigger developments can be expected on the cargo side as carriers look to deploy 747-8 freighters, for which DFW is making improvements. DFW has service from 11 freight airlines.

DFW ended 2013 as the fourth largest airport in the US based on total passenger numbers. With 60.4 million passengers, this represented modest growth of 3.2%. But the strong performer in DFW's traffic has been international passengers, which have grown nearly 10% in both 2012 and 2013. 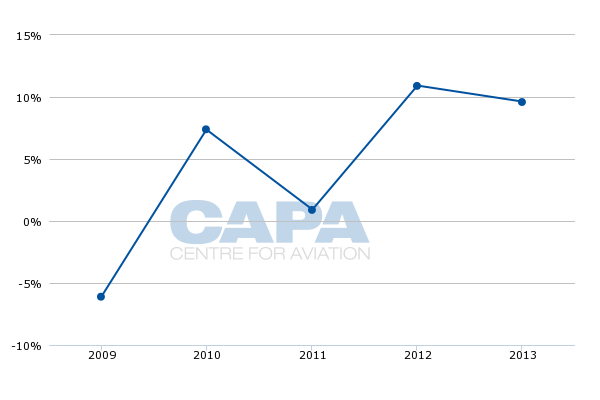 American serves Hong Kong, Seoul and Shanghai daily while Tokyo is double daily. All routes are operated by the 777-200ER, except Hong Kong which uses 777-300ERs. Korean Air's Dallas-Seoul route is the only Asian service from a carrier other than American. Korean Air flies daily with a 777-200ER, which was increased from five weekly just prior to American's entry on the Dallas-Seoul route.

Asia-Latin American connections are a small but a good niche

Miami is a larger hub for Latin America, with the Florida airport having approximately 263,000 weekly seats to Latin America compared to Dallas' 104,000, according to OAG data. However, Miami has so far proven to be too far for airlines to reach from Asia, giving Dallas a large advantage in being able to offer one-stop itineraries rather than two-stops from a US gateway and then Miami. (The industry has pondered a Tokyo-Miami service, but this has yet to eventuate.) 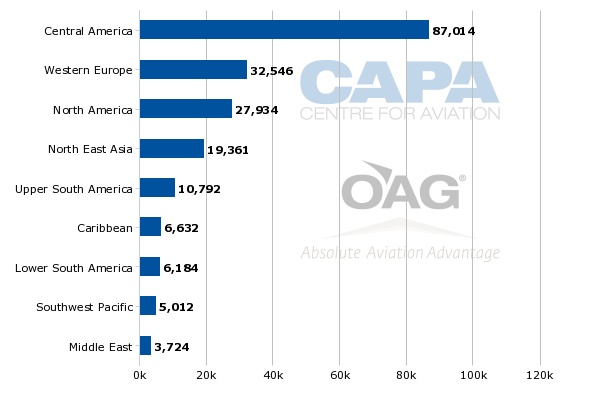 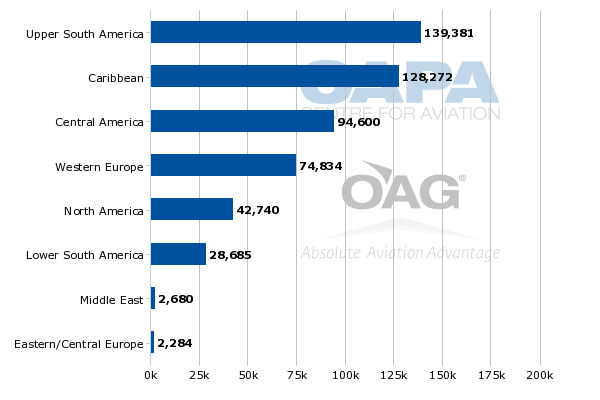 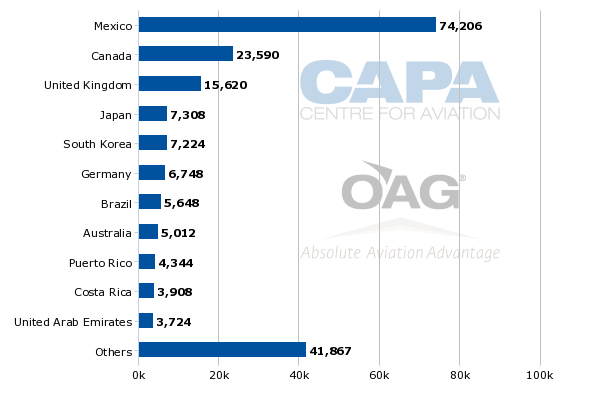 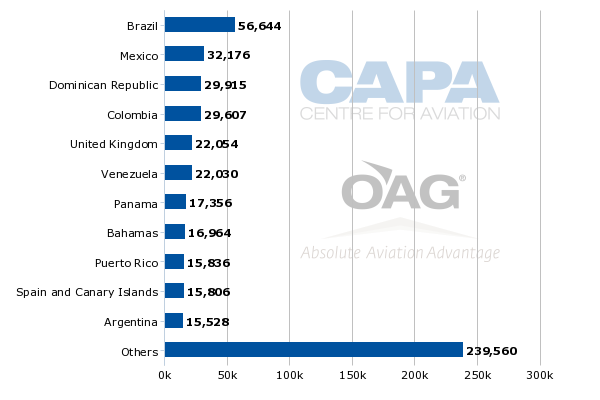 The Asia-Latin America market is large but fragmented and without a dominant hub; airlines in Europe, the Middle East and North America compete for traffic. The hubs have advantages and disadvantages. Flight times through Europe tend to be longer as airlines do not structure schedules around Asia-Latin America connections while Gulf carriers have a limited footprint in Latin America, and US carriers, much to their and airports' frustration, cannot offer a visa-free transit due to government security concerns. 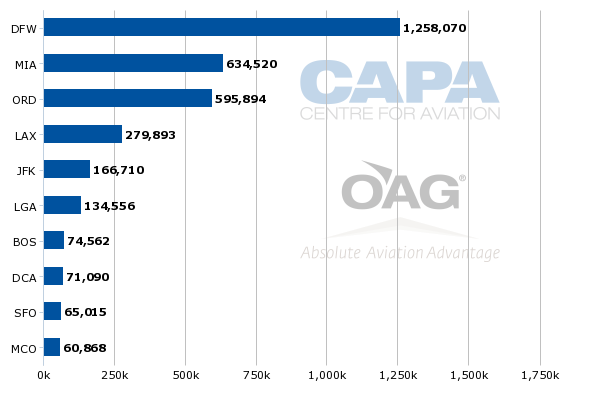 Beijing service priority for DFW. After that, Asian growth should cool

Now that the Dallas-Shanghai Pudong/Hong Kong is announced and running, DFW is focusing on securing a link to Beijing. "That will complete our Asia network," said Mr Perez. American Airlines CEO Doug Parker would like to fly Dallas-Beijing, but has said the carrier has not received suitable slots. American Airlines serves Beijing from Chicago whereas Shanghai has service from both Chicago and Los Angeles on a daily basis (and now also daily from Dallas).

There is the possibility service could eventuate from Hainan Airlines, which has been growing its North American network from Beijing. Hainan had mooted a Beijing-Dallas service, but nothing has been realised. Other than service from Hainan, it is unlikely for another Chinese carrier to operate to Dallas. Air China already serves Houston, the hub of fellow Star carrier United, while China Eastern and China Southern are members of SkyTeam and depend on Delta for connecting traffic. Although Cathay mooted a Hong Kong-Dallas service, this has also not eventuated.

A Beijing service should represent a cooling of growth between Dallas and Asia. With key cities served, Dallas – and American – would be looking at secondary cities, especially in China. Viability will depend on China's continuing growth, fuel-efficient aircraft like the 787 and relaxation of visa restrictions. United Airlines has continued to grow in Asia ahead of peers, having launched the first route (San Francisco-Chengdu) for a North American carrier to a Chinese city other than Beijing or Shanghai.

Vietnam and then the Philippines are some of Dallas' largest unserved markets, but the leisure nature of the traffic as well as distance effectively prohibit a non-stop service in the foreseeable future.

Dallas has secured service from the Middle East's three Gulf network carriers, and Mr Perez would like to see a Dallas-Istanbul service from Turkish Airlines. Although not specifically in the Gulf region, Turkish Airlines' network strategy has many similarities to that of Emirates, Etihad and Qatar.

Mr Perez is bullish on the opportunities Gulf carriers will continue to deliver Dallas. While Delta and United have repeatedly made anti-Gulf carrier sentiments, Mr Perez sees their contribution as positive. "The pie is growing," he says of international traffic. Gulf carrier expansion – including Emirates using the A380 from 01-Oct-2014 – has occurred while traditional European network carriers like KLM and Lufthansa continue to do well.

Three US cities – Chicago, New York and Washington – have services from Emirates, Etihad, Qatar and Turkish. Dallas is one of three other cities (including Houston and Los Angeles) to have service from three of the four carriers.

US destinations served by Emirates, Etihad, Turkish and Qatar: Dec-2014

Dallas is also looking east for new non-stop destinations. It would like to see Rome and Zurich, likely via American Airlines. American serves Rome from Chicago and New York JFK, and Zurich from New York. From Dallas, American serves the European points of Frankfurt, London, Madrid and Paris.

It is not just the passenger side seeing developments at Dallas, 11 freight carriers also operate there. These include all of Asia's main cargo carriers: Air China, Cathay Pacific, China Airlines, China Cargo Airlines, EVA and Korean Air. (Cargolux has flown the -8 to DFW but now serves the route with 747-400s, according to OAG.)

Mr Perez says cargo customers are interested in bringing their 747-8 freighters to Dallas, and the airport is working to ease the process by re-striping the cargo tarmac, working with third-party cargo handlers to improve facilities (only American's facility for now has a cooling facility) and ensure customs staff are available to process cargo. Mr Perez believes Dallas has a geographic advantage given its close proximity to Mexico, which facilitates trucking services to/from Dallas.

Although cargo services to Mexico are growing (from Cathay Pacific, for example, with service to Mexico City and Guadalajara), Mr Perez remains optimistic on airlines preferring to truck goods from Mexico to Dallas for onward freighter flights.

This negates needing a short but expensive tag flight to Mexico City, whose high altitude can impact aircraft performance. Further, many factories are along the Mexico-Texas border, making it efficient to truck to Dallas and its wider array of cargo services rather than truck to a Mexican city.

Foreign airlines anchoring themselves around Dallas – and American

In a few short years Dallas has gone from being American's hub, and a place served by some European carriers, to a global destination. That has been made possible through Dallas' own growth and the development of the airport, but also American Airlines working with partners – Qantas, for example, a route that took nearly a decade to come to fruition and which from 29-Sep-2014 will be served by the A380 (rather than the 747-400 currently used. Developments from Gulf carriers should ensure there is more growth to come; the Gulf carriers rarely stick to a single daily flight (and Emirates is a close partner of Qantas, also having engaged in discussions with American over closer cooperation).

American's Hong Kong-Dallas route supplanted Emirates' Dubai-San Francisco route as the world's eighth longest, joining the ranks of Sydney-DFW as the longest route. Everything is bigger in Texas, as they say, but airlines are finding reasons to make the journey and keep growing.