Cyprus Airways: an airline in need of the turnaround of all turnarounds

Mired in financial difficulty, Cyprus Airways is one of many European airlines currently working to implement a Turnaround Plan. It is probably the one with the most urgent need, although the exact state of its finances is shrouded in mystery. It has still not published an Annual Report for 2012 and it recently postponed its 1H2013 financial results pending an investigation of its position by the European Commission in connection with a State Aid application.

Cyprus has been one of the economies worst affected by the eurozone crisis and its national airline has been hit hard both by this and by ever fiercer competition, in particular from LCCs. In addition, the divided status of Cyprus prevents the airline from operating in one of the largest markets, namely Turkey. Following a wholesale replacement of the Board of Directors in May-2013, the new management team may not have another chance to save the airline.

Many of the main elements of Cyprus Airways’ Turnaround Plan make familiar reading: the provision of emergency funding through a EUR45 million capital increase, asset disposals, capacity cuts, outsourcing, headcount reduction by over 400 in 2013 (possibly more in 2014) and wage cuts. In Jun-2013, new chairman Tony Antoniou estimated that the delay in implementing a redundancy programme cost more than EUR30 million in 2012. The Plan also involves measures to improve the product, and its perception, and to grow revenues.

Cyprus Airways expects to see a “drastic reduction” in operating losses in 2013 versus 2012. According to reports in the Cyprus Mail (31-Jul-2013), the plan sees a return to breakeven in 2015. The company has been open to outside investors, but to date none has been forthcoming.

After a change of management and directors, precipitated by a disagreement with the government over redundancy compensation, Cyprus Airways submitted its new Turnaround Plan to the European Commission in Jul-2013. This submission is part of the process for the approval of Rescue Aid from the Government of Cyprus. The Commission’s review is currently expected by Nov-2013 and this has led to the delay in publication of its half year results for 2013. In the event of non-approval of the state aid, Cyprus Airways is working on alternative plans, including the use of subsidiary Cyprair Tours to take over the AOC and assets of the company

However, comparison of the two years is distorted by both exceptional income and costs. The 2011 result benefited from exceptional gains totalling EUR31.7 million related to the sale of slots at London Heathrow to Virgin Atlantic and the sale of aircraft and engines. The 2011 result also bore one-off redundancy compensation costs of EUR9.7 million and impairment losses of EUR4.9 million. The underlying operating loss of EUR49.6 million in 2012 was only EUR7 million worse than in 2011.

The 2012 preliminary results did not include a detailed breakdown of revenues and costs. On revenues, Cyprus Airways said that the 18% decrease was due to the reduction in passenger and freight revenue. “The number of seats available for sale was reduced as a result of the abandonment of unprofitable routes and the limited demand due to the economic downturn and the intensifying competition”.

On costs, which fell by 12% (excluding one-offs) the company said: “As a result of the redundancies of 2011 staff costs decreased in 2012. Aircraft depreciation decreased in 2012 after the sale of the two A319 aircraft and all other costs including fuel, en route charges, catering and selling costs decreased due to the drop in the number of flights operated and passengers carried.” 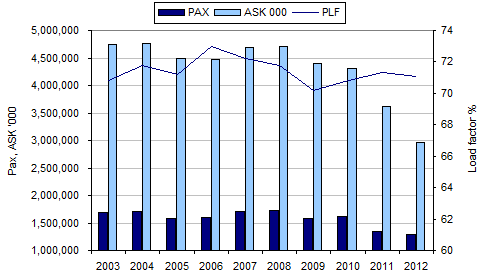 The Larnaca base is Cyprus Airways' key

According to data from Innovata for the week of 16-Sep-2013, Cyprus Airways has 28% of seats at Larnaca Airport, where it is the leading airline. Aegean Airlines, Monarch Airlines and Aeroflot are the next biggest carriers, with shares of 8% to 10% each. Cyprus Airways has 49% of the weekly aircraft movements, but its lower share of seats reflects the smaller size of its aircraft compared with leading competitors. 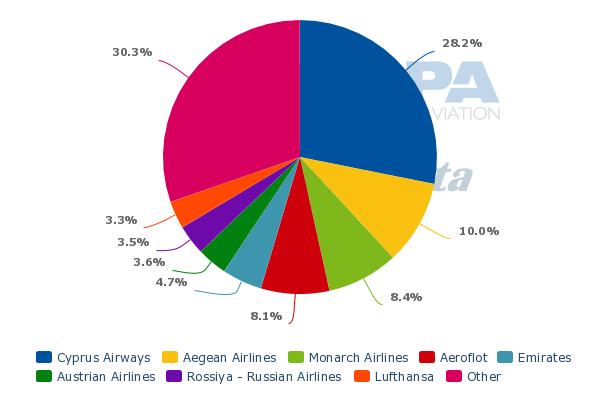 With no domestic Cyprus market, Cyprus Airways’ network is dominated by international routes, although 10% of its seats are domestic routes in other countries (almost all of this in Greece). It operates to 14 destinations in Europe and three in the Middle East from its Larnaca base. 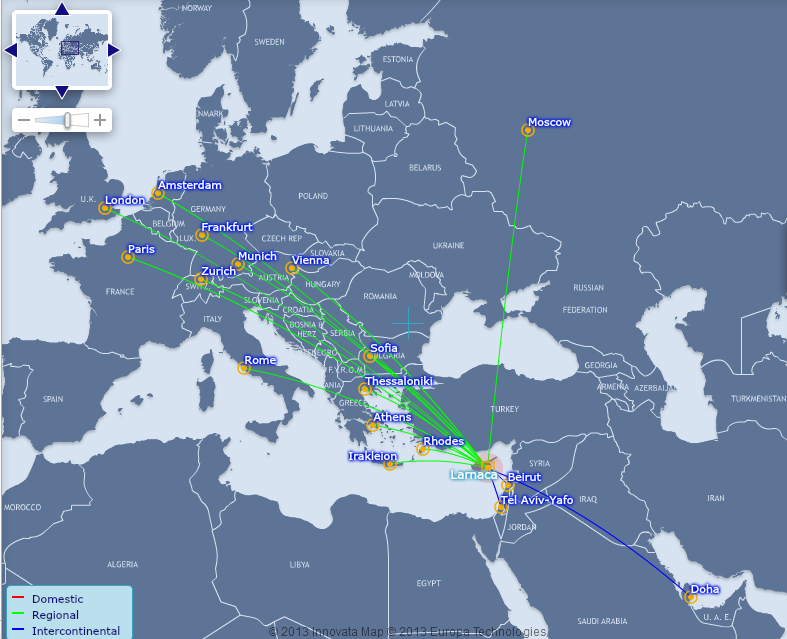 It has no long-haul routes, but offers its passengers destinations in the US through a codeshare with Virgin Atlantic. Not a member of one of the branded global alliances, it also has codeshares with a number of other European and Middle Eastern carriers. 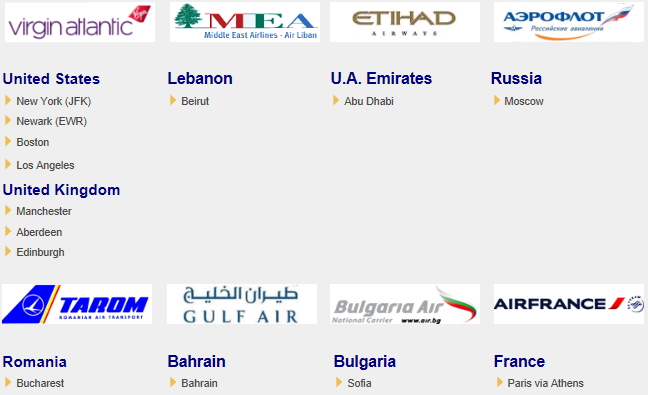 Greece is its top destination country

Cyprus Airways’ most important destination country is Greece, reflecting strong cultural ties. Its list of top 10 countries also includes Israel and Lebanon, but mainly consists of the major northern countries of Western Europe. Russia is the only Eastern European country to feature in the list 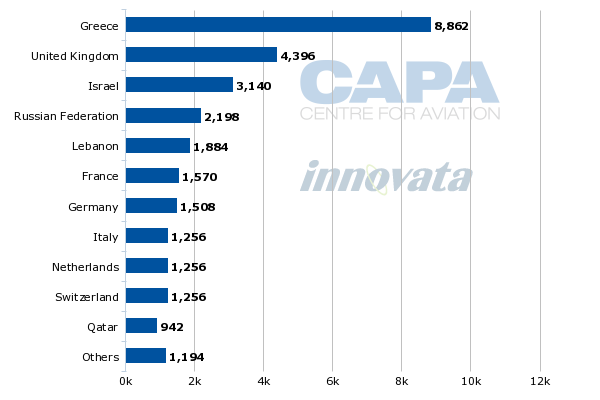 Cyprus Airways’ top 10 international routes by seats reflect both its immediate regional location (as illustrated by connections to Athens, Tel Aviv, Beirut and Thessaloniki), and the need to link into major European hubs with significant long-haul networks (for example London Heathrow, Paris CDG and Amsterdam). Moscow also features in the list, reflecting business and financial links. 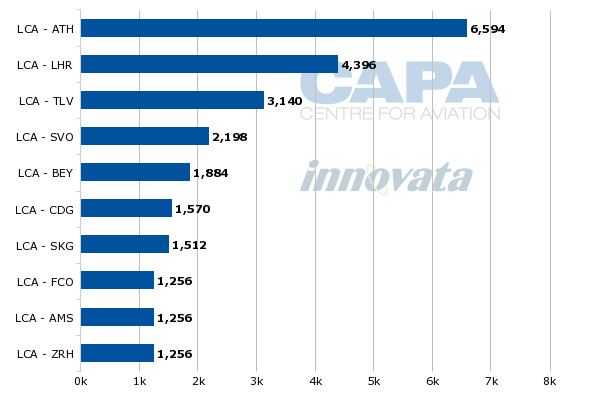 The leisure passenger orientation of Cyprus Airways’ network is evident in the relatively low frequencies that it offers. It has less than a daily frequency on 14 routes and daily or more on only four (Athens, Heathrow, Tel Aviv and Moscow). Nevertheless, following network adjustments, it has a less seasonal schedule than most airlines that carry a high proportion of north to south leisure traffic. 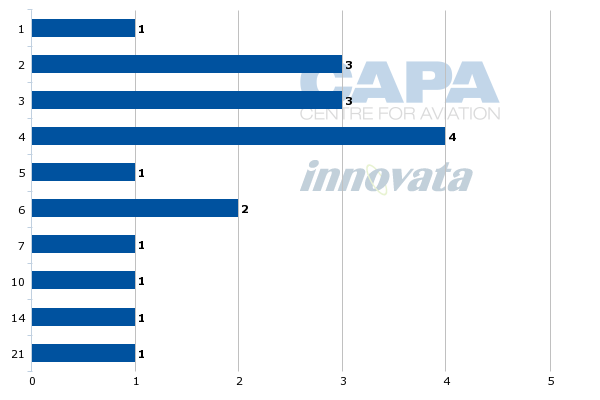 Direct competition on routes from Larnaca does not look too fierce

In addition to the top 10 international routes noted above, Cyprus Airways operates domestic routes in Greece, including one (Irakleion-Thessaloniki) on which it has sufficient capacity to match its seventh largest international route. It also operates Rhodes-Thessaloniki and Irakleion-Rhodes, but withdrew from three Athens-based Greek domestic routes in Jul-2013. The table below summarises the airline's competitive position on its 11 biggest routes.

It is the number one carrier by number of seats on six of these routes and has a monopoly on three (week of 16-Sep-2013). After 13-Oct-2013, it will have a monopoly on a fourth (Larnaca-Zurich). Its leading positions tend to be on routes between Larnaca and major Western European hubs (and Tel Aviv). On its Greek routes, it is number two to Aegean Airlines and it is number two to Aeroflot on Moscow. It faces competition from LCCs on only one of the 11 routes, namely London, where Monarch and easyJet operate (but to different airports).

In his speech to the company’s 2013 AGM, Cyprus Airways chairman referred to “the intensity and cut-throat competition mainly from low cost airlines”, yet this is not fully apparent when looking at the list of the airline’s most important routes. Data from CAPA and OAG show that competition from LCCs is growing. 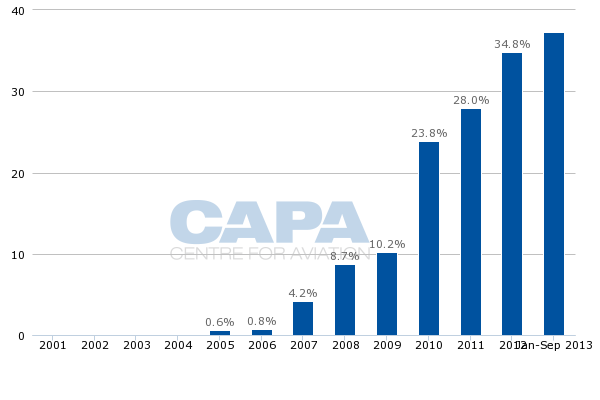 Cyprus Airways’ home base at Larnaca only has one LCC (Monarch) with a significant market share, but this does not give the full picture. While Larnaca is the biggest airport on the island of Cyprus, there are two more airports – Paphos and Ercan – between them accounting for more than half of the total seat capacity.

Paphos is dominated by LCCs – Ryanair, easyJet, Jet2.com, Monarch and transavia.com are all present – and Ercan is dominated by the two largest Turkish carriers, including LCC Pegasus, which has 53% of the seats at the airport. 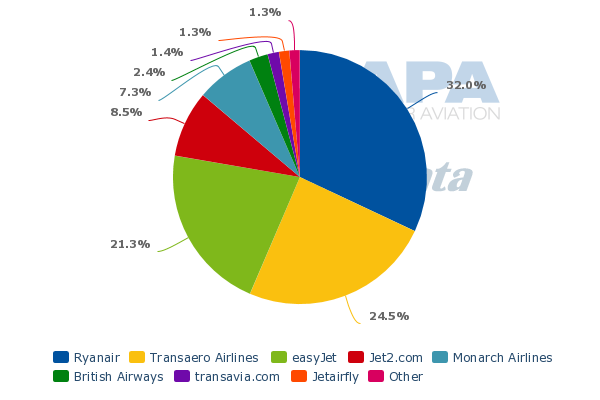 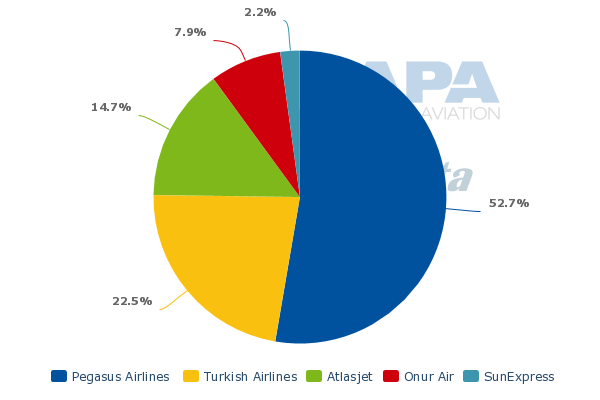 Cyprus Airways is only number one on Cyprus to Middle East

Strong competition over a number of years means that Cyprus Airways is the largest airline by seats in only the smallest of its three regional markets: from Cyprus to the Middle East (20% of its seat capacity), where LCC competition is minimal.

The two biggest regional markets for Cyprus Airways are Western Europe and Eastern/Central Europe, both of which account for 40% of its seats (week of 16-Sep-2013, source: Innovata). On routes from Cyprus to Western Europe, it was only the number three carrier by number of seats this summer, behind LCCs easyJet and Monarch (although it will be number one in the winter schedule). 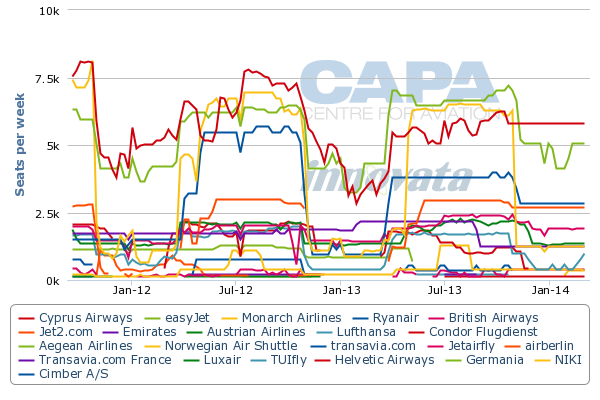 The other major Eastern/Central Europe countries are Russia and Greece and Cyprus Airways is not the leader in either of these markets. Between Cyprus and Russia, Cyprus Airways is number four behind Transaero, Aeroflot and Rossiya and on Cyprus to Greece it is number two to Aegean (with Ryanair close behind at number three). (All rankings based on seats for the week of 16-Sep-2013, source: Innovata).

Putting all this together, Cyprus Airways is only the second largest airline in Cyprus, with a share of only 13% of seats. If we exclude leader Pegasus and the other Turkish carriers, since Turkey is a market not open to Cyprus Airways, then it is the leader in the remaining market, but its share is still only 19%

An relatively young all-Airbus fleet, likely to diminish in size

According to the CAPA Fleet Database, Cyprus Airways had a fleet of nine Airbus narrowbodies as at 17-Sep-2013, with an average age of 9.7 years. There were two A319s and seven A320s and all but one aircraft were financed on operating leases. Its A330 widebody aircraft left the fleet in 2012. The restructuring plan is believed to see the fleet reduce to five operating aircraft, with one as back-up. One A319 will exit the fleet in Nov-2013.

Its CASK is not low enough

Based on the preliminary 2012 financial results announced by Cyprus Airways and 2012 traffic data from AEA STAR, we can estimate that Cyprus Airways' unit costs (CASK – cost per available seat kilometre) are between EUR7 cents and EUR8 cents and that its average stage length is around 1,500km.

This CASK compares favourably with the bigger legacy carrier groups in Europe, but still puts it at a unit cost disadvantage compared with the LCCs and even some of the more efficient legacy carriers.

In particular, it has a significantly higher CASK than all of its biggest competitors: Aegean, Monarch, easyJet and Ryanair (Transaero is also a major competitor, but we do not currently have a CASK estimate for it).

Where its main competition comes from LCCs, this is a precarious position and one that cannot be sustained. 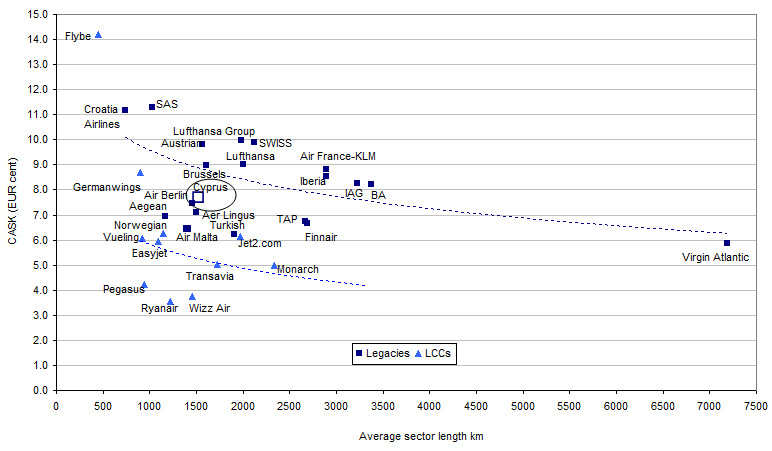