Taiwan and China in Jun-2011 agreed to increase the number of weekly cross-Taiwan Strait services by 50% from 370 to 558. Carriers on each side will receive an additional 94 weekly services through the new agreement to cater for increased travel across the Taiwan Strait amid improved bilateral ties and travel demand. The increase follows an increase in weekly services in 2010 from 270 to 370, reflecting booming trade and travel between the mainland and Taiwan.

The recent decision to increase the number of weekly cross-Strait services was announced after the two sides in Jun-2011 concluded their first meeting to review agreements signed since 2008. The mainland added four destinations for cross-Strait flights in Yancheng, Wenzhou, Huangshan and Lanzhou and Taiwan added Tainan, for a total of 50 stops on both sides.

42 additional services to be launched from Taiwan in Jul-2011

While China has yet to announce its allocations to its airlines, Taiwan’s Civil Aeronautics Administration stated 42 of the proposed 188 additional cross-Strait services will be launched in Jul-2011 including one Taipei Taoyuan-Beijing service, three on Shanghai services, seven for Wuxi, seven for Sanya and three on the recently added Yancheng. "Redeye" night services to Beijing and Shanghai will be added at the same time.

The remaining 142 frequencies will be added by the end of the 2011/12 northern winter schedule, covering 10 more airports including Guangzhou, Shenzhen, and Nanjing.

TransAsia, China Airlines and EVA Airways get the most allocations

From Taiwan, additional services will be operated by six Taiwanese airlines, including the recently reinstated Far Eastern Air Transport. No more than two airlines will operate on any given sector.

Under the agreement, China Airlines and EVA Airways Corp, the two largest operators on cross-Strait services, received 19 additional flights. Civil Aeronautics Administration (CAA) Deputy Director-General Lee Wan-lee stated the two airlines were each given 19 additional flights because of the size of their fleets, as well as their past record of complying with government policies. 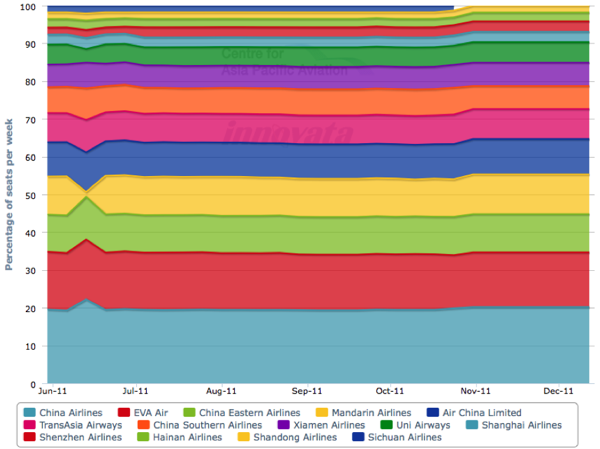 Far Eastern Air Transport (FAT), which resumed operations in Apr-2011, was awarded 24 additional flights on the condition that it increase its fleet size to meet potential demand. The administration had suspended FAT’s licence in May-2008 due to its financial difficulties. When the nation launched cross-Strait services in Jul-2008, the administration reserved 15 flights for FAT, but the quota was temporarily shared by five other carriers. FAT is however reportedly not happy with its allocation as it has not been awarded services to Beijing and Shanghai or other important coastal cities including Shenzhen, Guangzhou, Nanjing and Hangzhou but was instead awarded flights to secondary airports including Taiyuan and Guizhou.

Meanwhile, China Airlines, EVA and TransAsia were each awarded one red-eye flight to Shanghai. CAL also received a new flight service to Beijing from Greater Kaohsiung after a random drawing, meaning it is the only carrier to gain an additional Beijing service.

The changes will see Taiwanese carriers offer up to 279 flights to 41 mainland destinations per week. Their cross-strait counterparts will offer the same number of services to nine Taiwanese cities, with Tainan the latest addition. Of the 94 new regular flights, five were previously charter services that were offered on demand only, including two services from Greater Taichung to Wuhan and Zhengzhou in Hubei and Henan provinces respectively, two from Hualien to Hanzhou, Zhejiang Province, and Wuhan, and one from Hualien to Nanjing.

Meanwhile, China has reportedly decided not to approve China Airlines’ and EVA Air’s request to add Tianjin and Chengdu to the list of cities approved for cross-Strait freighter services as well as increasing the number of freighter frequencies to Shanghai and Guangzhou from eight to 14 per week. China has however, agreed to increase the freighter frequencies for Fuzhou and Xiamen.

As part of the agreement to increase cross-Strait allocations, CAA directed Taiwanese carriers to lower fares on cross-Strait services to Beijing and Shanghai, two of the most popular destinations for Taiwanese travellers. Local firms have reportedly agreed to reduce fares by up to 20% for some flights. They also plan to increase the percentage of low-cost seats from 20% to 25%.

After excluding the fuel surcharge tax and airport service tax, the price of a round-trip ticket good for one year to Beijing will decline to below TWD17,000, and the corresponding fare for a flight to Shanghai will fall under TWD15,000. In addition, the ratio of seats priced at under TWD10,000 on flights to Beijing and Shanghai will be boosted to 25% of total economy-class seats from the existing 20%. This will allow more people to travel across the Taiwan Strait at cheaper prices, CAA said.

In Mar-2011, Taiwan Fair Trade Commission fined China Airlines TWD20 million (USD677,856) and EVA Airways TWD12 million (USD406,711) for failing to lower fares on cross-Strait services. The airlines stated they had reduced fares in Apr-2010 on the services, with the Commission stating: "Our investigation found that in general, their prices have not been lowered substantially." China Airlines responded to the ruling stating ticket prices were determined by the market, something that the FTC failed to take into consideration when it imposed the fine. The carrier reduced its airfares on Taiwan-China routes five times last year in consideration of public opinion, it said. Meanwhile, EVA Airways stated EVA has "never cheated its customers" and the penalty has greatly damaged its reputation.

Cross-Strait passenger numbers and load factor: Sep-2009 to May-2011 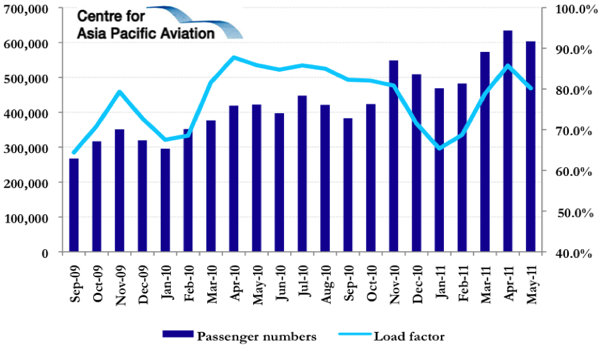 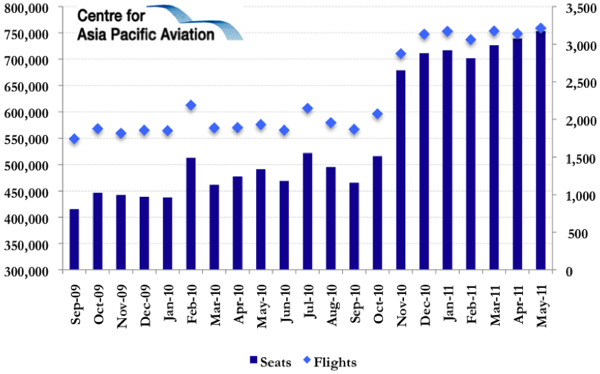 Cross-Strait services comprised 32.8% of Taiwan’s international passenger traffic in May-2011 and 21.9% of the total number of international seats.

In 2010, 1.63 million Chinese visited Taiwan, a 67.8% year-on-year increase, making China the largest source of visitors to the island and lifting overall tourism numbers to a record 5.6 million. Prior to 2010, Japan was the island’s largest source of tourist arrivals. Spending from Chinese visitors, including businessmen, contributed 0.72% of Taiwan’s GDP in 2010, the Bureau said.

Taiwan Tourism Bureau expects tourist numbers to increase by around 29% in 2011 to 2.1 million passengers as Taiwan allows individual tourists to visit from the mainland for the first time in more than six decades from 28-Jun-2011.

Independent Chinese tourists may bring revenue of between TWD9.1 billion (USD315 million) to TWD19.5 billion p/a, if the 500 visitors spend an average USD245.43 and stay for a week to the maximum 15 days, the Tourism Bureau has forecast.

China Airlines and EVA Air have called for the number of daily travellers to be increased, stating the opening of individual travel will not bring any immediate benefits in the short-term due to the restrictions on the number of tourists and the number of destinations.

Meanwhile, China’s Taiwan Affairs Office spokesperson Yang Yi stated China would reduce the visa application fees for Taiwanese residents travelling to the mainland by up to 50%, effective 01-Jul-2011. Visa applications for three months will be reduced from CNY100 (USD15.50) to CNY50 while visa application for long-term stays of up to five years will be adjusted to a standard CNY100.

Chinese tourists have been officially allowed to travel to Taiwan since Jul-2008, although travel was restricted to package tours. Allowing individuals may take Chinese arrivals to 4 million in 2012 from less than 200,000 in 2008, adding USD4.59 billion to GDP by 2012, Barclays Capital estimates.

Mainland visitors accounted for around 12% of shopping centre revenue in 2010 at Taipei 101, the world’s second-tallest skyscraper, owned by Taipei Financial Centre Corp. The company stated luxury products are in high demand from Chinese visitors as they cost an average 30% less in Taiwan. The company expects independent visitors to buy more at the shopping centre than group visitors as they have more time to browse. Tour groups typically spend about 1.5 hours at the mall.

China Airlines Chairman Zhang Jiazhu in Jun-2011 estimated that revenue and traffic contribution from the carrier’s cross-Strait services will double with revenue contribution to increase from 13.6% in 2010 to more than 30% over the next two to three years. In line with the booming development of the cross-Strait routes, the company will expand fleet to more than 100 aircraft in the next five to 10 years. At present, the company has 68 aircraft.

With the new cross-Strait allocations, the number of cross-Strait destinations served by China Airlines will increase from 17 to 25. Although the carrier is reducing fares by 5-15% on some cross-Strait routes, the carrier expects increased demand to offset the negative impact from lower prices. The carrier is planning to team up with more local travel agencies to attract more Chinese passengers, the carrier said, adding that the company’s passenger load factor for cross-strait routes should increase 20% in 2011.

Meanwhile, EVA Airways President Chang Kua-wei, also in Jun-2011, stated the carrier would acquire 20 aircraft to meet robust demand from China. "Our capabilities are still unable to meet the strong demand for the flight services between Taiwan and the Chinese mainland. Looking ahead, EVA Air is considering purchasing more narrowbodied passenger planes, like A321 ... to replace the existing MD planes," he said. The comments were made after the carrier added three mainland cities - Zhengzhou, Jinan and Ningbo - to boost its total weekly flights to China to 77, covering 17 destinations.

TransAsia Airways similarly placed a firm order with Airbus for six A321neo aircraft at the Paris Air Show to respond to strong growth on regional services, especially on direct routes between Taiwan and mainland China.