COVID-19 shock hits US airlines, but there is no blueprint to follow

The US government’s decision to initiate a travel ban covering the Schengen Area of Europe is essentially rubbing salt into the wounds the country’s airlines are suffering as the COVID-19 coronavirus has reached pandemic status, and that decision significantly raises the levels of uncertainty about when a recovery in demand will occur.

As the country’s largest airlines American, Delta and United navigate the effects of the ban, they are also likely being forced to examine their long term view of how they plan to rebound once the pandemic is over.

With US and world markets continuing to get pummelled, those airlines may need to change their judgement that COVID-19 is a “fear event” rather than an “economic event”. The public health emergency caused by COVID-19 has now turned into an economic crisis, whose duration is impossible to predict.

Attempts to compare this black swan event to 9/11 or SARS could soon be rendered irrelevant as sports teams suspend their seasons and an increasing number of employees are being required to work from home. The economic reverberations will be deep, and the timing of any recovery is by no means yet within view.

As widely reported, US president Donald Trump outlined a 30-day ban on travel from Europe (excluding the UK and Ireland) beginning 13-Mar-2020. Exceptions to the ban include Americans returning home from Europe.

The implications and effects of the ban on the airlines and travel industry have been widely discussed, and the largest operators between the US and Europe – American, Delta and United – are working to adjust their schedules as a result of the ban. Before the ban, United stated that its gross bookings to Europe had fallen by 50%.

In a blog post, CAPA’s partner OAG had determined that 40% of the flights affected by the ban are operated by US airlines.

Delta Air Lines represents a 17% share, followed by United with a 14% share, and American with an 8% share. The Lufthansa Group represents 13% of the flights between the US and countries covered under the ban.

Cowen & Co managing director Helane Becker has stated that in 2019 the trans Atlantic market made up 11% of American’s revenue, 15% for Delta and 17% for United.

The major US airlines have been working to sustain and increase their liquidity to withstand the coronavirus pandemic.

Recently, United stated that it had raised an incremental USD2 billion in new liquidity from a group of banks as a secured loan, and company executives observed that the loan was secured by vintage aircraft.

“The airlines are in cash preservation mode, and we fully expect to see credit facilities extended and increased in the next week”, Ms Becker said, adding that US operators were likely “talking to their banks about raising capital to get through the downturn”.

“We previously stated US airline bankruptcies were unlikely and in the near-term that still remains the case, but if bookings do not improve in the next three months things could deteriorate quickly”, Ms Becker’s report stated.

The severity of the effect of the coronavirus pandemic on the global economy and the aviation industry could be unmatched, and any comparisons to 9/11 or SARS could quickly become irrelevant.

Quite simply, the coronavirus pandemic has become a health crisis that will have reverberations for the global economy for quite some time.

Everyday life in the US is rapidly coming to standstill, which is also the case for many populations across the globe. In the US, a strong economy has fuelled robust demand for domestic air travel for the past few years, but that positive trend has been completely turned upside down for the near term.

The US’ National Basketball Association and the National Hockey League have suspended their seasons due to players testing positive for the virus. Major league baseball teams have delayed the start of their season and have suspended spring training. Colleges and universities have shut down and turned to remote learning, and teleworking is becoming a mandate at more and more corporations.

All of these developments are, indeed, unprecedented, and have not been a feature of previous exogenous shocks that the airline industry has faced.

The return of underlying demand that US airlines were hoping for – once a sense of normality returns to the country – will take much longer to materialise than previously expected. Airlines will be forced to inject low fares into the market place to stimulate travel, which will further pressure revenue.

US airlines are largely leaving their order books intact, for now

US airlines have been taking immediate measures to withstand the fallout from the coronavirus pandemic, including cutting their capex forecasts and, in some cases, adjusting their operating fleets.

Delta’s management has stated the airline is parking wide and narrowbody aircraft, and is evaluating earlier retirements of older, less fuel efficient aircraft. The retirements are against a backdrop of plummeting oil prices, caused by a stand-off in production between Russia and Saudi Arabia. But perhaps Delta has decided that it is more prudent to park those jets rather than weather the negative effects of oil price swings that could occur from the tug of war over production.

United has declared that it will not take delivery of an aircraft, unless the aircraft is fully financed, until the coronavirus crisis is over.

Most US airlines are touting their fleet flexibility, and at this point they are not discussing aircraft deferrals. But the economic turmoil that is engulfing the world could result in operators re-evaluating their aircraft delivery streams.  CAPA’s fleet database shows that US operators have approximately 2,260 aircraft on order, and United has the largest order book – 304 aircraft.

United States of America aircraft on order by airline, as of early Mar-2020 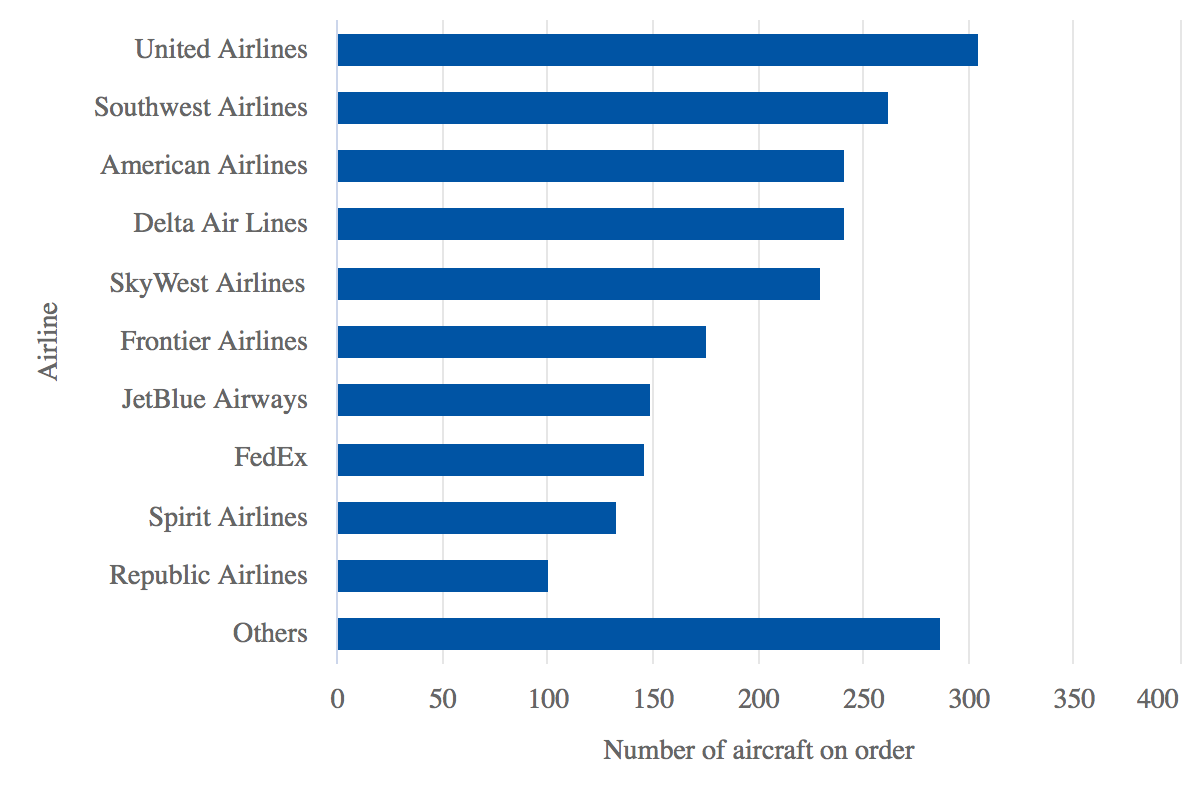 In some ways, the US is just at the beginning of the tumult created by the coronavirus. At the moment there is no accurate method for gauging how much the virus could spread, and the lack of testing capacity will only exacerbate the situation.

Presently, no one can legitimately determine the ultimate effects of the pandemic on the country’s airlines, since the public health crisis will get worse before it gets better.