As the duration of the COVID-19 pandemic is still unclear, airlines worldwide remain in survival mode working feverishly to sustain and grow their liquidity levels while simultaneously attempting to stem cash outflows.

IATA has forecast that Latin America’s traffic will fall by 49% year-over-year in 2020 as a result of COVID-19, with a USD18 billion drop in passenger revenue. With very low to zero revenues flowing in, it is a delicate balance to strike, and airlines are stressing to their respective governments the pressing need for financial assistance, largely in the form of loans.

Governments have offered varying responses to the pleas of airlines – particularly in Latin America.

Among the three largest aviation markets in the region – Brazil, Mexico and Colombia – the reactions to calls for support have differed significantly, with Brazil appearing to offer the most pronounced forms of financial reinforcement.

Many domestic and international markets in Latin America have either shut down or significantly limited flights for varying periods to combat the spread of COVID-19.

The result has been an airline industry that has essentially ground to a halt, yet with some operators in the region entering the crisis on a more solid financial footing than others.

IATA has forecast that Latin America’s traffic will fall by 49% year-over-year in 2020 as a result of COVID-19, with a USD18 billion drop in passenger revenue. IATA has projected revenue drops in the region’s three largest aviation markets: a 48% drop in Brazil’s revenue, 45% for Mexico, and 47% for Colombia.

The association continues to press governments in the region to offer support to airlines, including loan or loan guarantees by those governments or central banks, as well as tax relief, waivers of ticket taxes and other government-imposed levies.

“The impact on airlines in the region for this crisis continues to be brutal. Passenger traffic has ground to a halt and revenue streams have dried up. No amount of cost cutting will save airlines from a liquidity crisis that is imminent and severe”, IATA has warned.

The assistance Latin governments have offered airlines is a bit patchy.

Brazil seems to have stepped forward with the most comprehensive relief. IATA has singled out Brazil (and Paraguay) for their efforts to help airlines during the COVID-19 crisis, particularly for deferring certain payments and reducing taxes.

“These actions need to inspire other governments in the region”, said IATA director general and CEO Alexandre De Juniac.

Brazil has allowed operators to postpone payments of air navigation and airport fees. The country has also worked with operators to create an essential domestic network to maintain a minimal air service.

According to Reuters, the country’s development bank, BNDES, is finalising a credit line for the aviation industry that will likely include requirements such as cutting bonuses and dividend payments.

Recently, in a discussion with analysts and investors executives from Brazil’s largest domestic airlines, GOL, analysts were told that the intention of BNDES is to offer a credit line totalling BRL10 billion (USD1.79 billion) to the country’s airlines.

Obviously the details are still being firmed up, but the package would essentially entail a credit line with a maturity of five years. At that time, the interest rates and potential equity stakes likely in the form of warrants, and their strike price, were still under discussion.

It is not clear whether GOL will ultimately work with BNDES, but the airline's CEO Paulo Kakinoff did highlight how proactive Brazil’s government had been in the COVID-19 crisis.

“They [the government] have been fully dedicated to finding the best solutions in order to provide the airlines payment deferrals and credit lines”, he stated.

Mexican government has yet to offer specific financial support to airlines

At this point, the Mexican government has not offered a specific aid package to airlines, but the country’s largest operators are pressing them with the point that airlines need a financial bridge as credit markets tighten.

In a recent interview with CAPA TV Enrique Beltranena, the CEO of Volaris, which is Mexico’s largest domestic airline, remarked that with more than 60% of the airline’s fleet grounded, and the company’s revenues reduced by 80%: “We strongly think the government should support airlines with significant and fast economic help”.

He stressed that the most pressing issue for airlines was cash flow, and that problem requires an aid package specifically for airlines in the form of loans.

“We are just requiring specific aid packages related to credit that can help us support the process of not having revenues in the following months. So we are not envisioning government subsidies in any way in the short term or the long run”, Mr Beltranena said.

Aeromexico is expressing a similar view. Recently, its CEO Andres Conesa said that the airline needed liquidity support due to financial markets being distorted. “It is very difficult to put a price on the renewals of debt in these very uncertain conditions…and it is very difficult to price any debt issuance in the public markets”, he explained.

Mr Conesa stated that Aeromexico was working constructively with the Mexican government on measures to strengthen its liquidity, ranging from extending terms of payments of jet fuel and airport services to credit lines from Mexican development banks.

Aeromexico has declared that it will have limited ability to generate revenue during 2Q2020, so time is of the essence for Mexico’s airlines, which are working to bolster their liquidity.

Colombia offers some tax breaks, but its credit support to airlines falls short

Data from CAPA and OAG show that for the week of 27-Apr-2020, Colombia’s system ASKs have been reduced by 81% year-on-year. 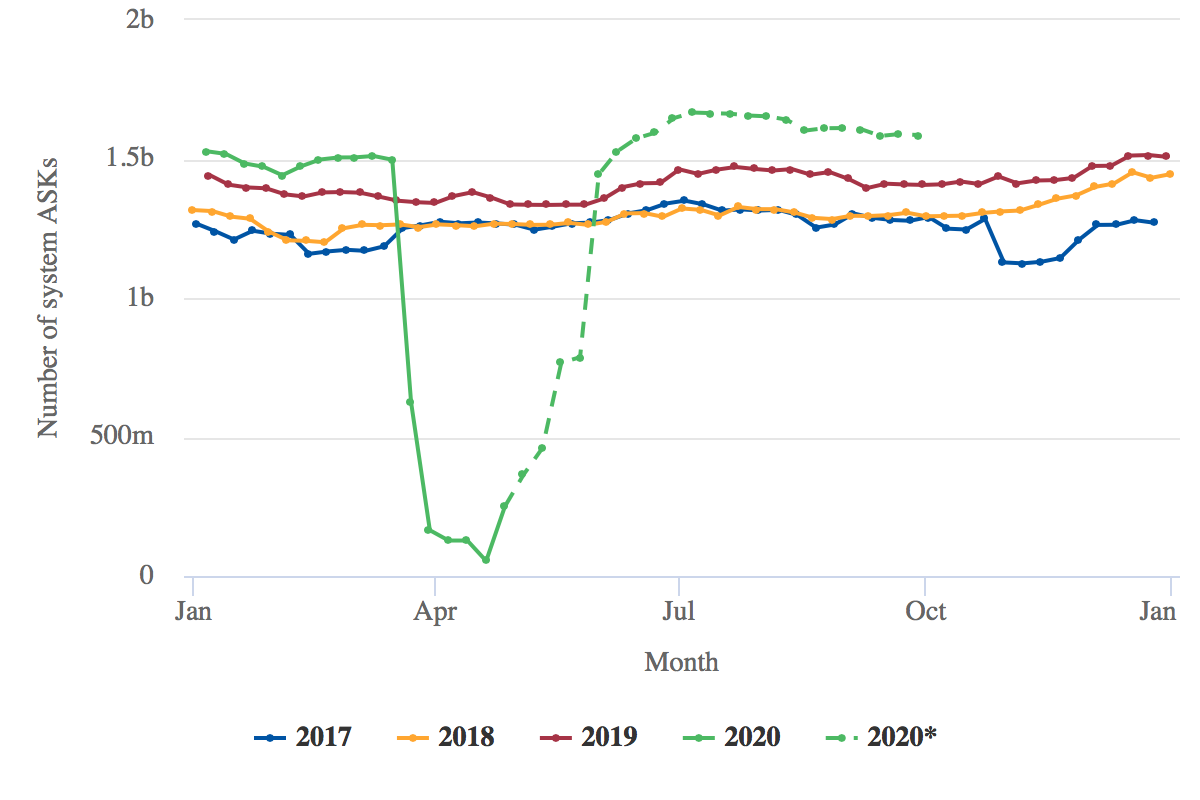 * These values are at least partly predictive up to 6 months from 23-Mar-2020 and may be subject to change.

IATA has commended Colombia on its recent decision to enact significant tax relief for airline tickets, jet fuel and tourism.

Previously, ALTA (Latin American and Caribbean Air Transport Association) has cited estimates from JP Morgan indicating that if all Latin American airlines cancel 100% of their itineraries for an extended period, they will survive "between three and 10 months maximum”.

The COVID-19 crisis has jolted public health assessments, economies and the global aviation industry, which until Mar-2020 was looking forward to reasonably solid prospects for the year.

Now global airlines are scrambling to secure enough of a financial bridge to navigate the next few months, and at this point those solutions are full of uncertainty. Some Latin American governments are making encouraging moves to ensure their respective aviation industries emerge from the COVID-19 crisis in stable condition.

But there is a valid argument that more needs to be done in a region that was once, before the pandemic, one of the fastest growing in terms of air travel.

There is an opportunity for governments in Latin America to recognise the importance of air travel on their respective economies; yet whether they can, and will, rise to the occasion remains uncertain.